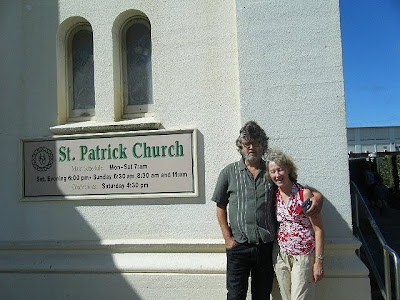 We had another of those Anniversary deals. They come once a year and always seem to amaze me that, yes we're still hanging in there. And, I still laugh at his silly jokes. Only now getting around to posting on this. We usually go back to the scene of the crime - Honolulu - and this year was no exception. He was romantic enough to want our picture in front of St. Pat's where it all began. Would you believe 44 years ago? We stay at the same hotel every time we go and still think it's great. Which it is, if you're not into Waikiki stuff. The Executive Center, downtown, 39th or 40th floor. And, then there's my favorite: Roy's! Though, it's a lot less innovative than when we first went, a few years back. Which Bob appreciates. I, on the other hand, happen to love surprises. And creativity with food. One of those compromise things.
Posted by Claudia at 1:28 PM

AWWWW you guys are so cute.