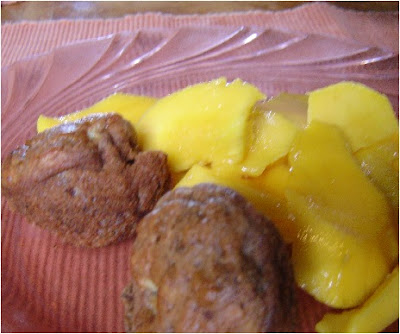 The fritters that aren't frittered (fried).  This is my long delayed, but promised post on banana fritters from the aebleskiver pan.  Fourth in a series, utilizing that silly fantastic purchase.  The last one was mini Yorkshire Puddings.   These delicious Banana Coconut Fritters were derived from François-Xavier's recipe at  fxcuisine. 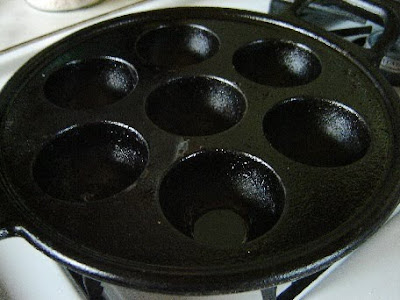 This pan really is amazingly versatile. Of course, it's not as sexy or pretty as the Indian one on FX's link, called an Unniappam pan, but still, reasonably priced and quite serviceable for Corn Dodgers, Mini Popovers, Yorkshire Puddings, even Aebleskivers, etc. etc.  I intend to continue adding to the list. 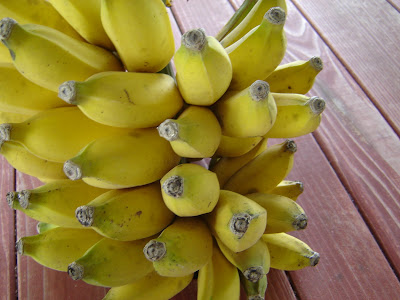 Though, the next experiment will involve actually following his recipe EXACTLY.  I discovered that there wasn't enough rice flour on hand, so used mostly spelt flour.  Also, I didn't add the full cup of palm sugar syrup, as I thought the batter would be too runny.  In the interest of culinary science and authenticity, another batch needs to be made.  Since we have a large bunch of bananas, ripe and waiting to be used, this is the time for more fritter trials. Though, one of FXs commentators did suggest adding whipped egg whites to lighten them up. Hummmm...

Preheat oven to 400 F.  Start by heating a cup of water with 100gr of jaggery (palm-tree sugar) until the sugar dissolves.  Fry the grated coconut in a scant tablespoon of ghee or coconut oil, and set aside.

Mix the rice flour with sugar, spice and baking powder, then add the banana mashed to a pulp and the fried coconut. Pour the jaggery syrup on top and mix thoroughly.

Heat the aebleskiver pan over stove top burner. Put about 1 tablespoon or so of coconut oil in each depression, brush all around the sides, and let it get quite hot.  Then, fill them with batter almost to the top. They will bubble all the way up quickly. 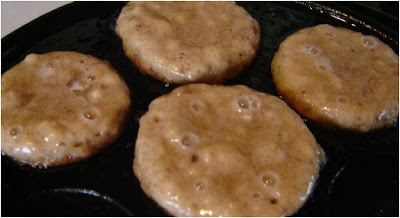 Fry a few minutes on a moderate heat. If the heat is too high the crust will burn before the inside is cooked through.  Then, set pan in preheated oven for 15-20 minutes or until puffed and well browned.

These are reminiscent of banana muffins, only with a crispy exterior, and the coconut gives them a wonderful subtle flavor. I think corn flour might work as well as the rice or spelt flour did, but that is another experiment on my agenda.
Posted by Claudia at 2:36 PM

Ooooh,...Claudia!! these banana & coconut fritters look like the real deal!!

They look so appetizing too!

i will make them with this rice flour & gluten free baking powder!!,..Ooooh,...yeah!!