If you can pronounce the words in my title, there is a special prize. I (don't ask why) have decided to attempt this year-long challenge of preparing a different type of charcuterie, each month with the participants of Charcutepalooza, currently taking place at Mrs. Wheelbarrow's site. It has been called A Year in Meat, and is hosted by Cathy Barrow and Kim Foster. These two women have come up with the quite inspirational idea for us to cure, smoke and salt our way right through Michael Ruhlman‘s how-to cookbook, Charcuterie.

January's challenge was Duck Prosciutto, which came and went before I had a chance to join in.  Though, I would say making Duck Confit several times comes close, as it involves salting, then slow cooking and preserving in fat, rather than dry curing.  At any rate, the hosts have decided to extend the January Challenge, allowing late posts throughout the coming year.  So, I'm okay, and certainly looking forward to doing Duck Prosciutto, and especially eating it.

The February challenge is the salt cure, either bacon, pancetta, guanciale ("gwan-chi- ah-lay") or lamb prosciutto.  Folks, this does not mean that I am not committed to using less meat.  Only to preparing more myself, and from humanely raised animals.  At any rate, for non meat eaters, salmon, salt cod or even lemons can be done with a salt cure on this challenge. One of the things I do with the lemons life gives me.  Lemon Mead is good too, but that's another story. Having procured some small farm, locally raised hog jowl, I began the simple (very) process of preparing homemade guanciale.  From what I was able to read, this fatty cut of meat, the jowl or cheek,  has a more intense piggy flavor than bacon or pancetta.  Which, if you enjoy pork, is a good thing.  According to Mario, in The Babbo Cookbook:


Guanciale is the very distinctly flavored bacon made from the jowls and cheeks of our hero, the pig.  It has a depth of flavor and intense richness that is simply not present in commercially made American bacon.  It is quite simple to make at home; we make fifty pounds a week at Babbo and use it with abandon whenever possible.

Whoa, if Mario uses it with abandon, it is likely pretty darn good.  However, having never heard of it before (goes to show that I don't read every word in my cookbooks), seen it in a store, or eaten this item, it's all new to me.  But, being up for trying something different and tasty, away we went. 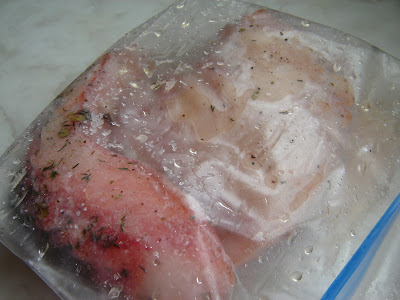 The first step was to trim away any glands, then coat with kosher salt, and herbs, for which I followed Matt's excellently presented recipe at Wrightfood, since my Charcuiterie book had not yet arrived, and the Babbo directions were not big on detail.  For a first attempt I wanted lots of explicit instructions.  Kate at Living the Frugal Life also had very helpful hints. As per the recipes, I sealed it all in a zip-lock bag to refrigerate for 7 days.  The above photo was taken a few days into it, and you can see where the salt is already drawing moisture out of the meat.

Next, I rinsed off the cure (not bothering too much that some thyme stuck on), poked a hole in the top and used butcher's string to hang our cheek in the fridge.  Yes folks, this is Hawaii.  We won't be dangling anything in a basement, attic or cellar at tropical room temperatures. And as there was no earthly way of squeezing that assembly into my home refrigerator, it went into the one at our office.  After re-arranging some folks' Tupperware.  How many Real Estate offices do you know of that have a hog jowl hanging in their fridge?  I stuck a note on it.  Do not touch.  Claudia's Guanciale.  We'll see. 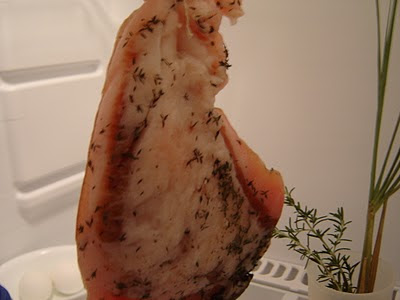 It is still there, air drying in a chilly place as required, for a month or two.  I set a few sprays of rosemary and lemongrass alongside to sort of recreate an Italian attic with open windows onto fields of grass and herbs.  People opening and closing the fridge door will be the wind blowing through.  This process is unbelievably easy.  Everyone should be making their own.  I'm serious.

I have lots of ideas for using that hunk of cheek, thanks to a few of my cookbooks, and various online sources.  But, I do want to make Bucatini all'Amatriciana and a truly proper Carbonara.  According to traditionalists, guanciale is the kosher? way to go on both.  Coming up y'all.  And, I will add the results to this post as soon as my cheek is done. One month later, (after weighing it was about 40% reduced) the promised results were eaten last night, rendered crispy and topping a creamy Sweet Corn and Oyster Mushroom Soup.  Outstanding, if I do say so myself.  The recipe adapted from Michael Symon's excellent Live to Cook.  I can't believe I have been throwing out corn cobs.  Thanks to Mr. Symon we will continue to use them for stock. The guanciale was not as strong flavored as I was expecting, but very good.  Not at all salty, as Wright's and Ruhlman's recipes called for washing off the salt cure before the air drying.  I noticed some recipes leave it on.  Next time I prepare this, it will be with wild boar, which is presently being sourced.

First prepare stock - cut the kernels from the corn and set aside.  Add the cobs to pot of chicken stock with the onion, garlic, herbs and salt.  Bring to a boil, then lower heat and simmer for 45 minutes.  Strain and discard the solids.

For the soup, sear the mushrooms in a heated, lightly oiled heavy bottomed 2 quart pan.  Toss til lightly browned, then set aside.  Render your guanciale or bacon in the same pan and reserve for topping.  heat oil or 1 tablespoon of the fat in the same pan.  Saute the garlic for a few minutes, add the corn kernels and continue to saute, stirring for 3 minutes.  Add the thyme, corn stock and cream and simmer for 45 minutes.

Remove about half of the corn with a slotted spoon and blend smooth with enough of the liquid to get it going.  Add back into the soup and simmer for a minute or so.  Ladle into bowls and garnish with the mushrooms and guanciale.

I am just so impressed by all of this meat curing that you're doing! That guanciale looks great.

Title looks difficult to pronounce.
I am sure the dish will be tasty.

Waw!! You are going to be a specialist in doing that!!

Waw!! That dish must taste awesome & well flavoured too!

I cannot pronounce it but I would sure want to eat it when it will be ready.