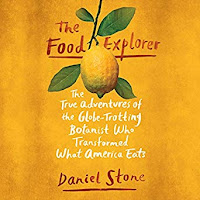 Kale from Croatia, mangoes from India, and hops from Bavaria. Peaches from China, avocados from Chile, and pomegranates from Malta. Fairchild's finds weren't just limited to food: From Egypt he sent back a variety of cotton that revolutionized an industry, and via Japan he introduced the cherry blossom tree, forever brightening America's capital. Along the way, he was arrested, caught diseases, and bargained with island tribes. But his culinary ambition came during a formative era, and through him, America transformed into the most diverse food system ever created." 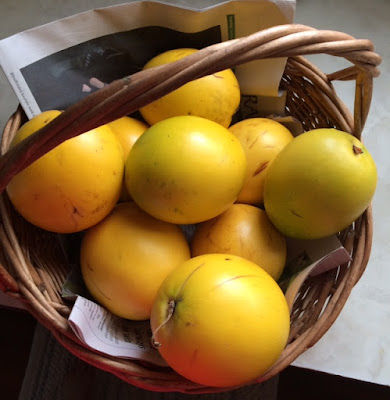 This photo is of a fruit that bears abundantly in our garden, and is new to most of the people I share it with.  Abiu, creamy, custard like and sweet, so another plant discovery right here. 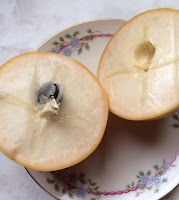 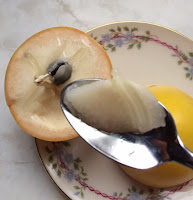 To me the amazing variety and number of different fruits, vegetables, herbs, spices and ornamental plants in existence worldwide, clearly demonstrates the immense creativity of God, and His love for us, shown by this provision, in such an extravagant, incredible way, for our life on planet earth.  We are so blessed!

Something new all the time it seems!  I was in our market yesterday and the produce manager gave me a fruit to taste which looked a lot like a rambutan, but larger, and the fruit was sweeter.  She said it was a pulasan!  Of course, I had to bring home the seed and plant it in a nice 10 inch pot.  We'll see how it comes along.  It may end up replacing our rambutan.  Fairchild's favorite fruit, as it turns out, is also one of mine, the mangosteen.  However, I've been patiently waiting for the darn tree to fruit, for more than 15 years!  But, I'm with him, I love finding new plants and adding them to my garden. 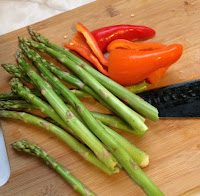 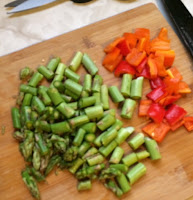 As far as a dish inspired by this book, it would have to include something brought to the US by our featured explorers.  I ended up making a Tagliatelle with Asparagus, Peppers, Pancetta and Asiago Cheese, based loosely on Mario Batali's recipe in Babbo (his had parsnips). The explorers sent back so many thousands of plants, among them a number of varieties of peppers.  At one point, the USDA reported "more than ten new plants were arriving in America each day."  Asparagus was first introduced to America by  Fairchild's associate, Frank Meyer, who traveled extensively in China during a time Fairchild was based in Washington. 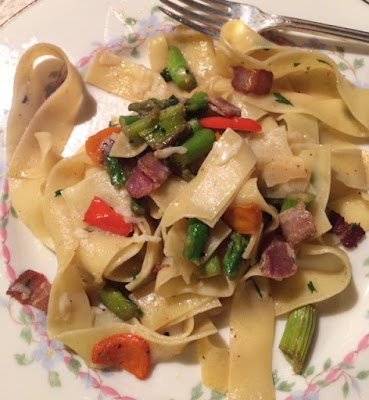 Tagliatelle with Asparagus, Peppers and Pancetta

Bring a large pot of water to boil for the pasta, and meanwhile, prepare your mise en place.

In a medium saute pan, cook the pancetta or bacon over high heat until it is browned and the fat has been rendered, about 10 minutes.  Remove with a slotted spoon to a plate lined with paper towels and set aside.
Add the butter, asparagus and peppers and saute over medium heat until the vegetables are cooked through, 5-6 minutes.  Season with salt and pepper, add the parsley and cook 1 minute longer.

Add 2 tablespoons salt to the boiling water and cook the pasta until done, as per package directions.  Drain, reserving some of the cooking water, and add to the pan of vegetables.  Toss over high heat to coat the pasta, adding more cooking water if necessary to keep the sauce from getting too tight.  Toss with the cheese before serving. 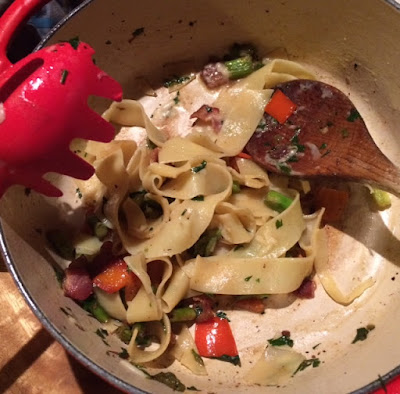 It was good to be reminded of all the work those plant explorers did to bring such an amazing variety of food to our tables.  We enjoyed this dish, one of  many ways to serve up the always versatile pasta.. I'll be sharing it for our Cook the Books Club Round-up of dishes inspired by The Food Explorer, also over at Beth Fish Reads for her Weekend Cooking event, and with Heather's Foodies Read Challenge for September.  Lots of good cooking ideas and book suggestions at these sites.  Be sure to stop by for a visit.

Claudia, this looks delicious. The book wasn't exactly my cup of tea, but I learned a lot.

Loving the pasta recipe. The great thing about this book was the abundance of food. We could literally make anything at all.

Your "Cook the Books" group really reads some fascinating food history. Just your review of what I assume to be a long book taught me several things.

YOur recipe looks perfect. I had this book on my list at one point but it slipped off my radar. It sounds really interesting -- this is the kind of book I like to dip into: reading parts carefully, skimming others.

Your recipe looks wonderful. The book- well I'm not that much into the history of food in my foodie reading, although I was interested in what you shared! Thanks for the review

Your pasta looks so tasty! After the reading the book it's hard not to stop and think about the food and the access and variety we have to choose from--a bounty indeed. Thanks for joining in. ;-)

This looks so good! I’m always fascinated by all the fruits and vegetables in the world that aren’t well known in the US. I lived in the Marshall Islands for several years and encountered many fruits that I wish I could get in the US. I was fascinated by the role that popular opinion played in this book - what caught on based on people’s tastes at the time and what didn’t.

Abiu is right at the top of my favorite fruits. I was actually wondering if Fairchild tasted it. And thanks for telling us about the rambutan's cousin: if I visit the Big Island again, I will look for it at the farmers market. Great choice of recipe to showcase asparagus and peppers :)

No matter what it's inspiration, I can always get behind an Italian pasta dish with asparagus. Sorry to be SO late in commenting -- will be back in the swing soon hopefully.