All About Roasted Roots Soup 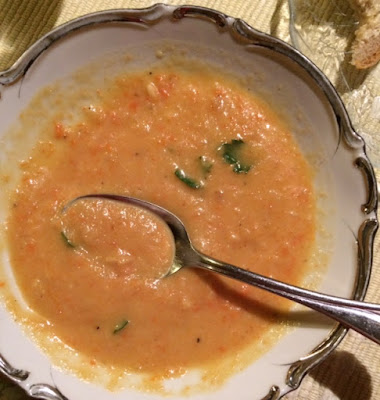 This soup came about after my last batch of pressure cooked broth was nicely cooled and waiting in the fridge, with caps of fat to be removed.  I was thinking what sort of soup shall we make?  There was a bit of broccoli from the market, but more would be needed for a cream of broccoli soup.  Then, back at the market, next day, no broccoli was left.  However there were some nice parsnips, and that spurred me on to the thought of other roots; carrots, shallots, sweet potato and garlic.  Yes, and the idea of a cream of roots soup was hatched.

Some cinnamon sticks were drying in the oven (pilot light only) and 2 were destined for this brew.  You get the picture.  Just add cream and a sprinkle of parsley when finished.  While not quite.  First the roots needed to be roasted.  So, Roasted Roots Soup.  I chopped up the various roots in about 1 inch chunks, tossed with some peanut oil, harissa, salt and pepper.  Then roasted at 425 for 30 minutes, turned and finished them for another 20 minutes or so. Should have gotten a picture at this stage.  Oh well.

Then after cooling a bit, into the blender with the stock.  Added cream (about 1/2 cup) cinnamon stick, more salt and heated it all up  That's it.  Sprinkle with a little chopped parsley. 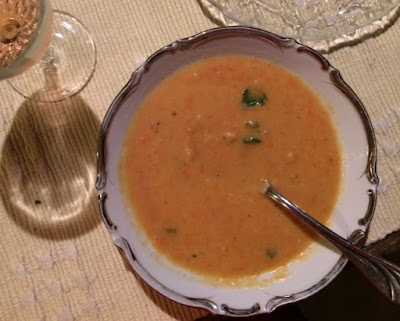 Peel the vegetables and cut into chunks.  Spread onto roasting pan and toss with oil, salt, pepper and dash of Harissa.  Roast about 30 minutes, turn and finish until soft, about another 20 minutes or so.  Cool a bit before blending with the broth.  Reheat gently with cream and cinnamon sticks.  Remove cinnamon sticks and serve with sprinkling of parsley. 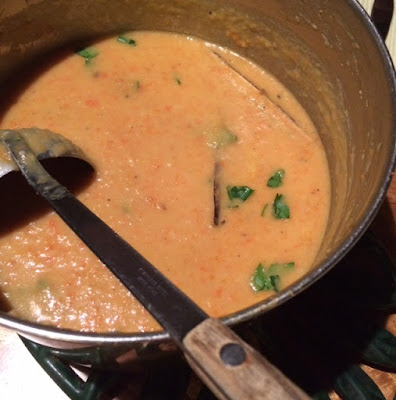 I was surprised at the depth and complexity of delicious flavor!  Amazing what just a combination of some roots will do!  We loved it, and I'll be doing repeats in future.  This will be shared over at Beth Fish Reads for her Weekend Cooking event.
Posted by Claudia at 8:06 AM

Wow! I am a soup lover and this soup sounds and looks delicious!

I keep all my bits and pieces of veg for soup. We just finished some for lunch. And I not just put on my frozen bag of broccoli, cauliflower, celery, carrot, potato and onion to make a creamy veg for tomorrow.

I love root vegetables and this looks so good and warming. We had our first snow last night, so it's definitely soup weather.

Roots soup is a wonderful idea, I'm going to try this recipe.

I'd eat this soup. Love the root veggies and I always have bits on hand. Love how smooth it is too.

What a great soup! Very resourceful!

Can I come over for dinner? ;)