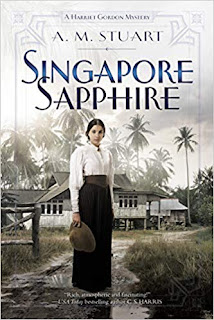 The downside to embarking upon a terrific new mystery series, when you've just finished the debut novel, is the wait for a follow up!  Singapore Sapphire, by .A. M. Stuart, has it all - an intrepid heroine, in an exotic locale, fascinating history and really splendid writing. I want to read her next one now!

I would only take exception to the cover.  Who is supposed to be represented here?  Certainly not our brave heroine, Harriet Gordon, an Englishwoman, raised in India.  More from the Publishers:

"Early twentieth-century Singapore is a place where a person can disappear, and Harriet Gordon hopes to make a new life for herself there, leaving her tragic memories behind her--but murder gets in the way.

Singapore, 1910--Desperate for a fresh start, Harriet Gordon finds herself living with her brother, a reverend and headmaster of a school for boys, in Singapore at the height of colonial rule. Hoping to gain some financial independence, she advertises her services as a personal secretary. It is unfortunate that she should discover her first client, Sir Oswald Newbold--explorer, mine magnate and president of the exclusive Explorers and Geographers Club--dead with a knife in his throat.

When Inspector Robert Curran is put on the case, he realizes that he has an unusual witness in Harriet. Harriet's keen eye for detail and strong sense of duty interests him, as does her distrust of the police and her traumatic past, which she is at pains to keep secret from the gossips of Singapore society.

When another body is dragged from the canal, Harriet feels compelled to help with the case. She and Curran are soon drawn into a murderous web of treachery and deceit and find themselves face-to-face with a ruthless cabal that has no qualms about killing again to protect its secrets." 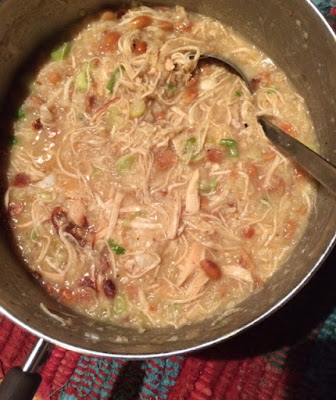 In celebration of New Year's, I prepared a dish traditional in many parts of Asia. Congee, also known as Jook, and Bubur Ayam in Indonesia and Malaya, is a savory rice porridge. Somewhere I've read that it is especially traditional at Chinese New Year's.  Probably as a hangover cure - that according to David Lebovitz.  Various condiments are added, most commonly peanuts, green onions, peas, mushrooms and or cilantro.  For some reason, mine came out thicker than usual this time, which is simple to remedy, just add more water or stock. I had left-over rice from Christmas, and used that, cooked until dissolving into the broth. 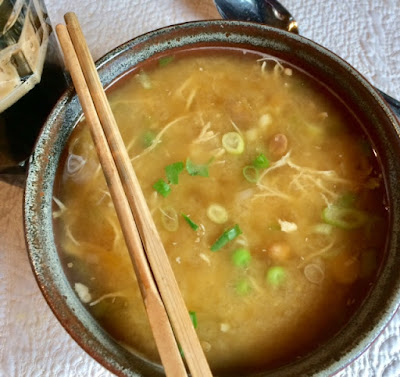 Allow at least 5 hours (unless making in your Instant Pot, in which case 1 hour)

Put 1-2 cups rice (depending how thick you want it) into a large pot, and fill 2/3's full of water.
Bring to a boil and add about 2 lbs. chicken and 2 thumbs ginger

When rice has expanded add shoyu and salt to taste with 2 cups raw peanuts.

Remove chicken when tender and de-bone (unless using boneless, skinless chicken).  Return meat to the soup, and let cook until rice has dissolved into the broth.

Chopped green onions, green peas and or sliced mushrooms may be added 15 minutes before serving.

Please excuse the brevity, but it's what was on my old index card.  Lebovitz also has a recipe rather more involved. 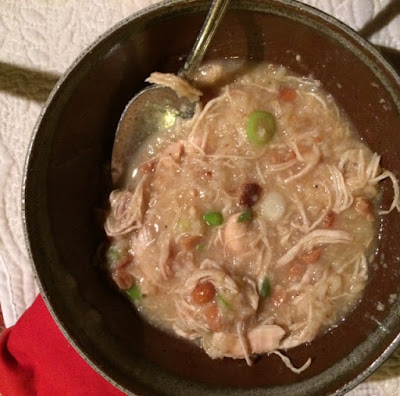 A very comforting sort of soup/porridge and quite adaptable as well.  I'll be sharing over at Beth Fish Reads for her Weekend Cooking event.  Check out some good books and recipes over there.

This does look like a great comfort dish. And I know what you mean about waiting for the next book in a series.

Chinese and other Asian writers do mention this dish often -- I suspect thaere are more versions than there are cooks!

Ooh, I love books set in Singapore so I will check this one out--although I do agree with you about that cover! Hmm... ;-)
Your jook looks comforting and good--with today's rain, I'd love a big bowl!
Happy New Year!

I have been interested in this book since before it was released (the author is local to me!) but I still haven't read it. I am heading to Singapore this year so maybe it can be my holiday read.

I agree with you about discovering a new series. It’s always cool when you find one and several books are already out. But then there’s the wait for that next book. Drumming fingers on the table in anticipation! Great locale, I like exotic and read to travel there.
Yum on the Jook. If it has noodles I usually like it.

Ha, does look like noodles Tina, but that's chicken strands. There's rice in it, cooked to oblivion, dissolves into the soup.