Escapism Cooking, In One Sense 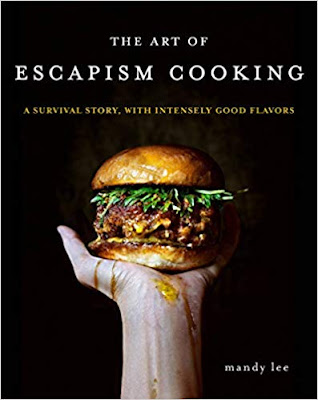 When I got The Art of Escapism Cooking by Mandy Lee, from our library (this is not a book you want to buy without checking it out first) I thought, my word, what amazing looking recipes!  What wonderful photography!

Then, I realized that these recipes were for very involved, not to mention strange, concoctions.  Pages of instruction and hard to come by ingredients, many incorporating unique sauces, which needed to be created first, before using, in meals entitled for instance, Spelt Jianbing with Kettle Cooked Potato Chips, Clams Over Oatmeal, Chewy Layered Paratha, Korean Pork Belly Tacos with Pear on Sticky Rice Tortillas, and Semi-Instant Risotto with Pork Fat Crispy Rice Cereal.


This is not merely fusion cooking people, but more like Double Extreme Fusion!  And Lee gives her readers a few tirades on that subject, for example her rant on pizza:

"Pizza has the potential to be Italy's ramen, a democratic arena of creativity, progressivism, and tolerance, if only the Italians could just chill the fuck out about it.  Is it really pizza?  Who says so, and who cares?  Neither the tomato itself nor baking stuff on top of a fermented dough was an original Italian idea, and if the Italians from a few hundred years ago were dumb enough to give a shit about that, then there wouldn't even be such a thing as pizza today.  All the dishes we eat today were fusion at some point in history.  And to say that this progression should stop and freeze at an arbitrary point for the sake of national pride is both dangerous and dumb-sounding." 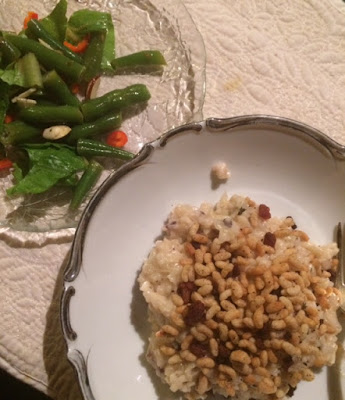 
"In this inventive and intensely personal cookbook, the blogger behind the award-winning ladyandpups.com reveals how she cooked her way out of an untenable living situation, with more than eighty delicious Asian-inspired dishes with influences from around the world.
For Mandy Lee, moving from New York to Beijing for her husband’s work wasn’t an exotic adventure—it was an ordeal. Growing increasingly exasperated with China’s stifling political climate, its infuriating bureaucracy, and its choking pollution, she began “an unapologetically angry food blog,” LadyandPups.com, to keep herself from going mad.

Mandy cooked because it channeled her focus, helping her cope with the difficult circumstances of her new life. She filled her kitchen with warming spices and sticky sauces while she shared recipes and observations about life, food, and cooking in her blog posts. Born in Taiwan and raised in Vancouver, she came of age food-wise in New York City and now lives in Hong Kong. Her food reflects the many places she’s lived. This entertaining and unusual cookbook is the story of how “escapism cooking”—using the kitchen as a refuge and ultimately creating delicious and satisfying meals—helped her crawl out of her expat limbo." 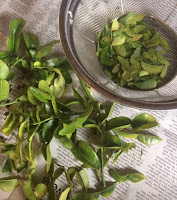 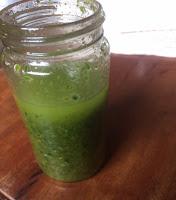 However, it was still a bit difficult finding something I truly wanted to make, and when I did, the instructions were off-putting.  Then, among her exotic sauces, there was one that seemed useful, as the main ingredient was growing in our garden: Makrut Lime Leaf Oil (Kaffir Lime to some). Only 2 ingredients needed, the lime leaves and oil.
Simple instructions: Puree well. 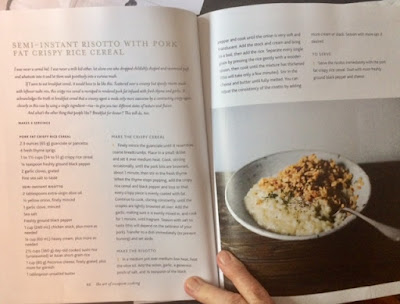 Then there was Lee's intriguing Semi-Instant Risotto with Pork Fat Crispy Rice Cereal, mentioned above, with the advantage of using day old rice. It actually turned out to be quite good, and Bob liked it as well.  A salty, crunchy, bacony topping contrasts beautifully with the creamy, cheesy risotto.  I used the rice blend we had left over, one I normally prepare - white Basmati, brown and wild.  Just used a bit more broth and cooked a little longer.  Also, I subbed in thick cut bacon for the guanciale. 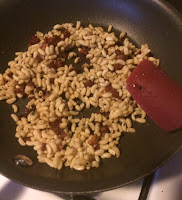 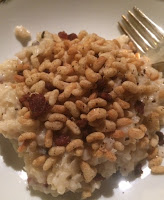 I served this dish as a dinner course, with a salad of green beans and slivered toasted almonds on the side.
All of which led to a final position of wanting to buy this book. For perusing on bad days.  When trying to find something to take my mind off reality. Something different, outside the normal.. Escapism in other words. 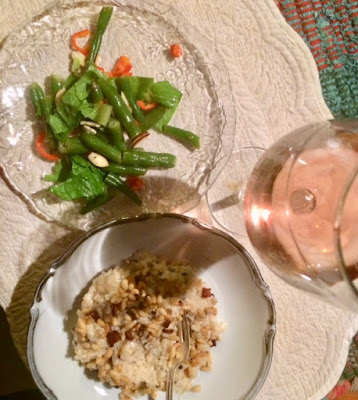 I'll share my thoughts and food with Beth Fish Reads for her Weekend Cooking event and with Heather on her February Foodies Read Challenge. Check out some good recipes and books on both sites.
Posted by Claudia at 10:18 PM

I'm so glad I decided to check this one out from the library instead of buying it sight unseen. I'm still on the hold list . . . I wonder what I'll find to cook. I'm a good cook, but I'm also a lazy cook.

Yes! I enjoyed reading this book but when i reviewed it I commented that for me it would be more reading for inspiration than cooking from it. Although I do recommend the Poached Eggs with Miso-Browned Butter Hollandaise. I have made the sauce several times it's so good! ;-)

True Beth, most of her meals are not for lazy cooks like me. And, Deb I do want to try those poached eggs next.

That sounds a bit daunting for me! Great review.
You mentioned bread you don’t have to knead in a comment on my blog, do you have a recipe for it posted? I’d love to try it.

Good note about checking this one out from the library first -- in the past I have bought cookbooks sight-unseen and... been disappointed. It's tough to know ahead of time how useful you'll find any given cookbook, and if one has really intense directions, as this one seems to, it's nice to get a taste first, so to speak.

Tina, I've never actually posted my process, but should do that. Here's a site that has one similar to mine, and there are many, except I use a sourdough starter. Her bread looks like mine, though I use an oven cloche, rather than a Dutch oven, which works well too, for baking. Same method, 20 minutes with the lid on and 20 without. https://www.jocooks.com/recipes/no-knead-bread/

Your review is great — now I know that I never never want to read (much less buy) this book! The rant on pizza was a really choice quote, since the Italians as far as I know never say anything like what she blames them for saying. Good advice you give here!

Definitely sounds like a library book to me! I like to try new things but they have to be accessible ingredients and techniques!

Glad you shared this review. Those kind of cookbooks are fun to look at but not very practical for every day living.

Wow! What a strange set of recipes. I'll definitely make this a library pick.

I, too, thought the photography was great. And, I liked the bread recipe I made, but I totally agree that the recipes were not for the standard cook (or kitchen). I got a gratis copy for a review. I've since passed it along to my sister.