Fat Cakes for Precious and Grace 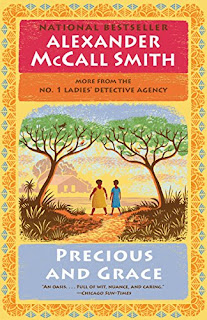 I have posted twice on the books of Alexander McCall Smith, both times from his 44 Scotland St. series, here: The Bertie Project, and here: A Time of Love and Tartan.  However, McCall Smith is really best known for his wonderful African, Botswana set series, featuring The No.1 Ladies' Detective Agency, headed up by Precious Ramotswe.  In them we clearly see his deep and abiding love for the country where he spent so much of his life.

This novel, and my most recent read in the series, Precious and Grace, has inspired a long overdue review.  Smith is a writer, unafraid to take his time, sometimes meandering, with deep thoughts and insightful meditations on the times, the people and morality, serious, yet with humor throughout.  His main character, especially true in this book, is often way more patient and understanding than I would be in a given situation.  A very good prod for my soul.  And his novel is particularly apt in our current National crisis - on forgiveness - so needed for healing.  Coincidentally, it was our Pastor's sermon topic last Sunday.  From the Publishers:


"Forgiveness is often the solution," observes Precious Ramotswe toward the end of Smith's warmhearted, humane 17th No. 1 Ladies' Detective Agency novel. Mma Ramotswe is referring to the book's main case, which involves a Canadian woman in her late 30s, Susan, who spent her childhood years in Botswana and now wants to find Rosie, the nursemaid largely responsible for raising her. Mma Ramotswe places an ad in a Gaborone newspaper, which brings a woman who claims to be Rosie to the detective agency. Grace Makutsi, the agency's prickly co-director, suspects this Rosie is a fraud, while Mma Ramotswe senses something not quite right about Susan's quest. Meanwhile, the ladies deal with a couple of minor cases: their assistant Fanwell rescues a stray dog that needs a home, and Mr. Polepetsi, their sometime helper, becomes an unwitting pawn in a pyramid scheme involving cattle. As ever, Smith adroitly mixes gentle humor with important life lessons." 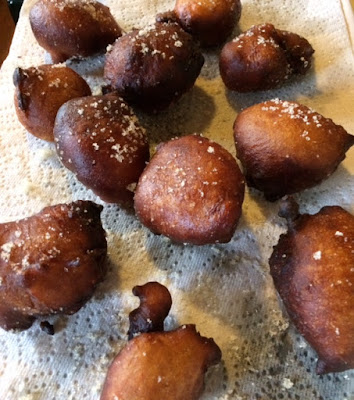 One of Precious' favorite treats is a Botswana and South African speciality, known as Fat Cakes.  From a wee bit of research, I deduced that we have a very similar pastry here in Hawaii, one with Portuguese origins, i.e. malasadas.  Fat cakes or magwinya are little yeast-raised, deep fried doughnuts, basically, popular throughout the world in one form or another.  Magwinya are thought to have Dutch origins, similar to vetkoek, a fat cake. The main difference between magwinya and vetkoek is that the former is often sweeter, lighter, and moister. Vetkoek also tend to be cut open and stuffed with cheese, mince, or jam and served with side items like fish. 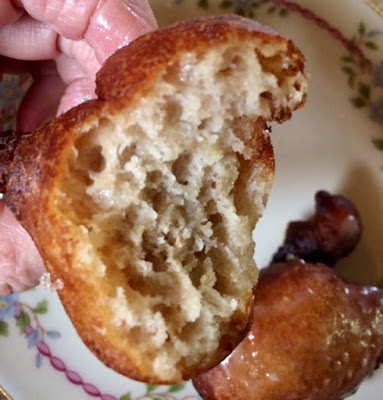 Magwinya is referred to as township food in South Africa. In Botswana, the best fat cakes are bought from street vendors who make them fresh and sell them with fried chips. Not the most healthy of foods, but a little shouldn't hurt, right?  Just a cake or two with a cup of coffee, or tea as Precious and Grace do.  My first thought was, I wonder if these could be made with my sourdough starter.  So, of course, that had to be tried. These little doughnuts don't have to be kneaded, rolled out and cut first, all good points in their favor, as it's a very soft dough, which you plop by the spoonful into the hot oil.  My hope was to get the right consistency using starter.  This can be tricky - converting a recipe from powdered yeast to sourdough starter. 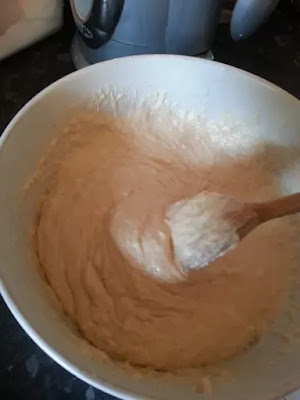 Here's what I did.  Made bread Tuesday, with refreshed and overnight refrigerated starter.  Put the remaining starter back in the fridge.  Fed it (refreshed) on Wed. night and left out at room temperature..  Thursday morning followed the recipe, using my active starter for part of the flour and water, adjusting for the consistency shown in the photo.  Then set it to rise.  The recipe said it should double in an hour or so.  Well, mine was not that speedy.  For the amounts, see NB.  Here is the recipe from Grand Circle Cruise Lines' Newsletter, for anyone who wants to just use instant yeast. 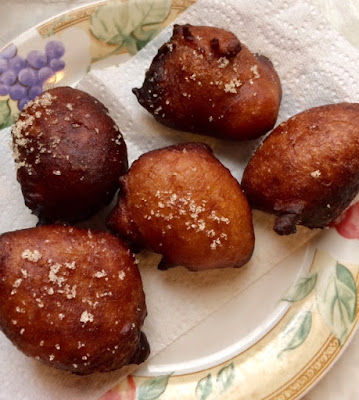 NB: For the sourdough version, I added 4 oz. active starter to 7 1/4 oz. flour, but would up that next time to maybe 7 3/4 oz. flour, for a bit stiffer dough (2 oz of which was whole wheat), 2 oz sugar, 1/2 teas. salt, several grinds of nutmeg, 7 oz water and 1 tablespoon vegetable oil.  Took about 6 hours for the doubling.
Preparation
In a large bowl, combine flour, sugar, yeast, and salt. Mix well.  Add the water and 1 tablespoon vegetable oil and mix into a soft dough.  Cover with a towel and allow to rise for one hour, at which point the dough should have doubled in size. As you can see, mine was not to the top (doubled) after several hours.  It took 6 hours to get up there. Mix again and rest for an additional 10 minutes. 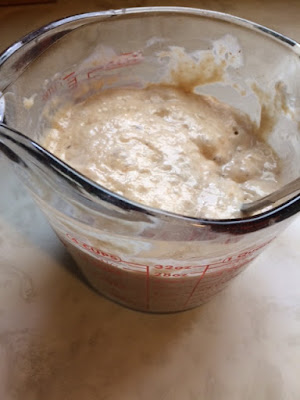 Meanwhile, heat vegetable oil in a large pot over a medium flame for deep frying. Test with a drop of batter: when it sizzles, you’re ready to fry.  With a tablespoon, drop dollops of dough into the oil, using a second spoon to help push the dough down if necessary. Start with one fat cake at a time to practice your technique, turning frequently until golden brown.  Drain over paper towels and serve as desired.  Not exactly uniform in shape, quite irregular, unless you're a better plopper than I. 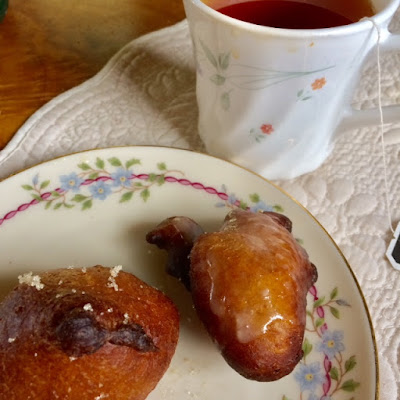 Crunchy on the outside, moist and light inside.  A lovely treat mid-morning, noon or afternoon, with a nice cup of tea.  Precious would be drinking Red Bush tea and Grace her black tea.  I had English Breakfast. One of the above was sprinkled with raw sugar (which I did with most of the doughnuts, and the other with an icing sugar glaze I had from another dessert.  Note: this is the easiest doughnut recipe you'll ever find.

I'm sharing this with Weekend Cooking, now hosted by Marge, the Intrepid Reader and with Simona of Briciole, for her 39th Novel Food event.  Be sure to stop by and see what everyone's been up to in their kitchens and reading lately.  All good, I'm sure.

My mother in law makes "lachmades" which I believe is Greek or maybe Italian - Her mom was Italian and her Mother in law Greek. Regardless, they were always amazing when eaten immediately.

I've a couple of these books and enjoyed them. Those Fat Cakes! Wow. Look so good.

I like your world tour of little fried dough balls... so many variations! I just read a book about South Africa where the food memories are quite different -- "Born a Crime" by Trevor Noah.

be well... mae at maefood.blogspot.com

Thanks for the recommendation Mae, I've put that book on the wait list at our library. It's fun these days, as we make an appointment and drive by to pick up at the front doors. I'm reading about half on Kindle and the other half with hard copy.

My husband is originally from South Africa so we just had quite a discussion about vetkoek. I think he wants some now.