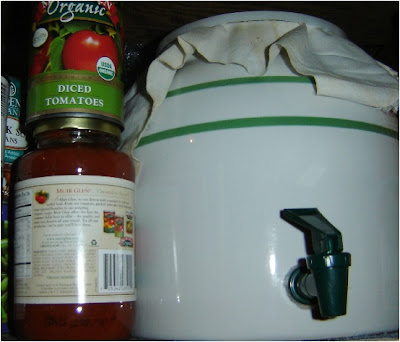 You've heard the expression, "When life gives you lemons, make lemonade?" Well, how about this one: "When life gives you junk wine, make vinegar?" This is my vinegar crock. I keep it in my pantry. You start by pouring in a bottle of apple cider vinegar (raw, unfiltered, with the "mother" - which is what they call the vinegar culture - not an exotic period in history) then dump in any wine you happen to have that doesn't meet your high standards of excellence. Keep a clean cloth over it so that the vinegar can breathe, but not with any bugs. From time to time (maybe once a week or so) add a glassful, or the rest of a bottle of wine. After a few months, lift off the thick layer of culture that will have formed on top, so it won't take over the entire production. By now you can probably open the spigot and fill up a small bottle. Maybe even attach a fancy label, which you've just designed and printed out. What I was doing today. Voila, add oil and you get dressing.

It's also a good parable for life, which often hands us junk. One of my first blog posts was on this very subject, but something we have to keep going back to. I do anyway. Every time there's a set-back, large or small, the temptation is to have a pity party, to whine, grumble, complain and blame. I need lots of reminders to look for the opportunity, the possibility or prayer in the situation. To keep remembering that God is good, and that he is doing a good work in me and,

"will carry it on to completion until the day of Messiah Jesus." Philippians 1:6 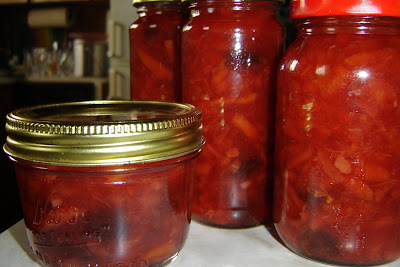 It felt like a real Fall Harvest Frenzy around here this morning. I chopped up, yes ... more guavas, added some exciting tropical spices - Hawaiian chili peppers, allspice, ginger, kaffir lime leaves, etc. and made up a batch of chutney. Meanwhile cacao pods were roasting and then, cooling for me to husk, grind and make into truffles. In between which I was trying to get a batch of macadamia nuts shelled . I'll put them in the truffles after a bit of toasting.

Cook the guavas with ginger, garlic and water, then add sugar, and remaining ingredients. Cook, on a hot fire, stirring occasionally until thick. Ladle into jars. This made 3 normal size jam jars and one smaller jar.

Guavas turn a lovely deep burgundy red when given a long cook.
Posted by Claudia at 3:46 PM 2 comments: 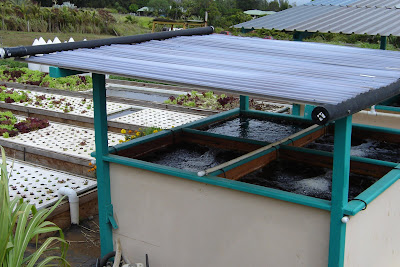 I went on the Hawaii Aquaponics Farm tour last Saturday with my friend, Linda, and grandson, Isaiah, and I'm just now getting to a post on it. Aside from personal and or commercial use, this looks to be a tremendous opportunity for implementing grow-your-own fish and veggies instead of monetary aid in various Third World countries, and even here in poor areas. Any money could go toward start-up costs. A friend came into our office last week with news that a large warehouse had been donated for Community development use in a very beleaguered neighborhood of New Jersey. This could happen, ideally, even in such urban settings.

Simply put, there is a tank with fish, growing them for sale and for fertilizer. The water from that tank then drops down into a bed tank(s) with floating vegetable rafts made of styrofoam. Pesticides are not needed and water consumption is lower than for traditional farming. Sounds great. Linda and Isaiah are going to take the class, starting next week. Then on to bigger things. This system can be scaled up or down, depending on the size needed. For home use only or for a commercial or community project.

I like the idea of keeping my lettuce from drying out so fast here without watering continually and fertilized at the same time. Not to mention having a source of naturally grown protein. At the farm they were raising tilapia and prawns. There were also mosquito fish in the water of the vegetable beds. We didn't get any bites while there.
Posted by Claudia at 10:15 AM No comments:

More Guavas Than You Could Shake a Stick at 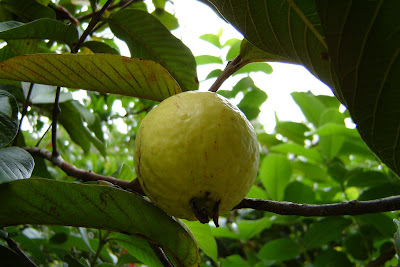 Guavas on my mind. They're everywhere in abundance this year in Hawaii, and I'm trying to utilize as many as possible, thereby avoiding the guilt of having tons go to waste on the ground. So far have made: jam, wine, catsup, BBQ sauce, cakes (2 kinds, attempting to find the perfect recipe). And in the process of which I discovered some great cooking blogs. One being Sonia Tastes Hawaii, and another, Evil Jungle Prince. He had a tempting-looking recipe for Guava Cobbler with Coconut Crust, that I really need to try. In fact it will be Sunday.

Tonight though, we're (in the Royal sense) doing a version of candied yams (in order to get it down before Thanksgiving). Yes, Guava Candied Yams, which I will be improvising, based loosely upon Camotitos Potosinos (Sweet Potatoes and Guavas in Syrup) from the Texas Monthly site. To use them for Thanksgiving I'll have to freeze some I suppose. 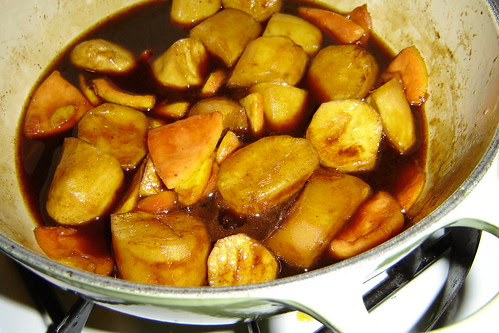 The yams and guavas simmering in a brown sugar syrup

Place the brown sugar, juice and 1 cup water in a 2-quart pan with lid, and bring to a boil. Cook over medium heat, stirring occasionally til the sugar is dissolved.

Add the spices & peel. Bring to a boil, then lower heat to simmer, covered 10 min.

Add the yams, and turn them a few times to coat. Continue simmering, covered for 20 min.

Stir in the guavas and simmer an additional 20 min. (uncover the last 10 min. - though, next time I may try raising the heat and going for more of a caramelized effect by quickly reducing down the syrup) Note: If using canned guava, just heat through on low heat, uncovered, for 10 min.

I served this with some leg of lamb and a small salad of cucumbers and arugula in a yogurt dressing. It was quite good if I do say so.
Posted by Claudia at 3:14 PM 2 comments: