Death by Darjeeling, and Tea-smoked Duck Breasts for Cook the Books Club 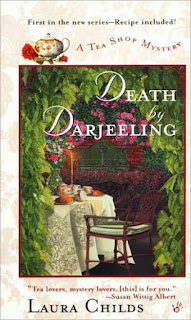 Our current read for Cook the Books Club is the cozy tea shop mystery, Death by Darjeeling, by Laura Childs.  If  death can be considered "cozy."  I've always wondered about that murder mystery appellation, though the tea shop and cafe she describes is certainly cozy enough to make me long for one in our town.

I've read others of her delightful books and come away with that same longing, as well as enlightenment on the subject of tea, the multitude of types with their unique flavors, from all around the world - India, Africa, South East Asia and China to a tea plantation in South Carolina, and, yes Hawaii.  We do have our own tea estates outside the town of Volcano, on the "Big Island."

I was so fascinated with the whole subject, thanks to Childs' book, that for purposes of burgeoning interest and research, I made an appointment to tour a local tea plantation,  Tea Hawaii, with hostess Eva Lee. 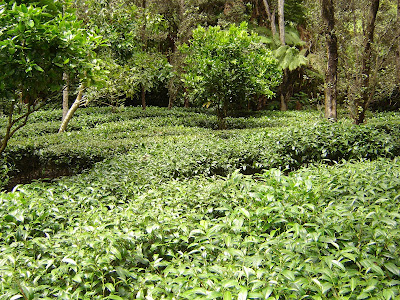 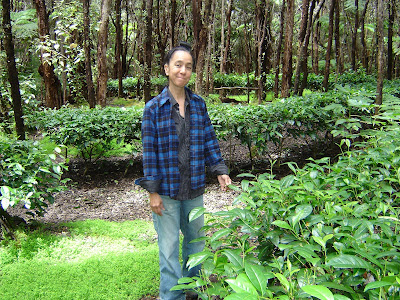 Eva Lee and her husband, Chiu Leong, founders of Tea Hawaii,  grow most of their tea in the understory shade of ohia trees.  I discovered that tea will thrive in shade or sun, and at various elevations.  Though, apparently the finest teas grow at higher elevations, due to the slower growth caused by a cooler climate.  Several cultivars  have been planted, and are kept pruned to just below waist height. 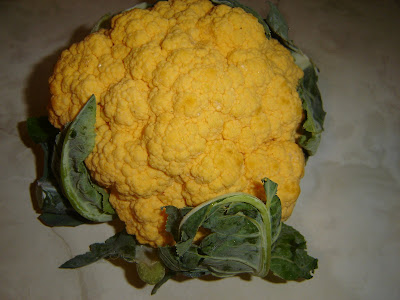 I saw this lovely veg, sometimes referred to as a cheddar cauliflower, in a produce bin and, as occasionally happens to me in markets, it emitted a come and get me siren call.  I visualized colorful florets mixing and mingling with pasta in an upscale Mac'n cheese, with prosciutto and grated Gruyere cheese.   Luckily, the cheese aisle was right near, and I had the prosciutto.  Doesn't that  make you happy when an idea comes in time.  Not at home with ingredients missing.

According to an article in the Daily Mail, about the bright colored cauliflowers, "Some scientists have even claimed that they are healthier for you.  Andrew Coker, a spokesman for the plant company Syngenta - which is developing the plants in Europe - stressed that the colourful cauliflowers were not the result of genetic engineering, but came after decades of traditional selective breeding....

Tests of the orange cauliflowers in America found that they contained 25 times the concentrations of beta carotene in normal cauliflowers." 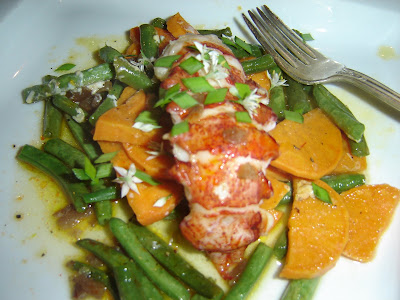 Our July 2012 Daring Cooks’ host was Sarah from All Our Fingers in the Pie! Sarah challenges us to learn a new cooking technique called “Cooking En Papillote” which is French and translates to “cooking in parchment”.

Several years ago, baking in parchment became one of my favorite cooking methods, still it was good having the opportunity to expand upon it..  I wanted to try some new takes on the fabulous En Papillote.  For instance, I realized from the given recipes that various oven temperatures and cooking times were possible.  Previously I'd just stuck to a basic formula, with variations only in the ingredients, herbs, etc., on the theory that if it works, don't mess with it. 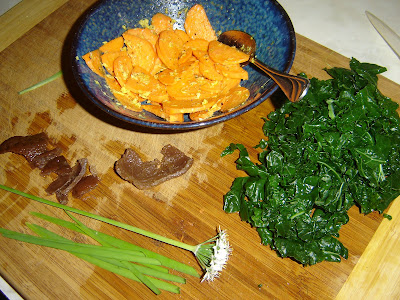 Fish seems to lend itself perfectly to this method of cooking.   So, for my first reprise it was salmon with sweet potato slices in a dressing of seasoned olive oil, paired with blanched kale, salted lemon and a few pats of butter.  I used fresh ginger in the sweet potato dressing, but those garlic chives got eliminated. 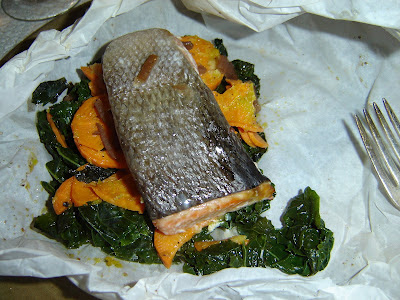 There is an element of fun in opening your mystery (to anyone else at the table) packet, aromatic steam puffing out, and dinner revealed.  They had just the right amount of moisture from the blanched kale, butter and sweet potato marinade.  Scoop it off the paper onto your plates and enjoy. 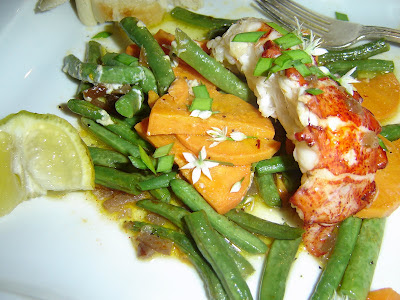 The next take involved a pair of overpriced lobster tails, saffron (they deserve each other), sweet potato again, just because it was so good, green beans and butter.  I sprinkled those garlic chives and blossoms on top after we opened the packets. 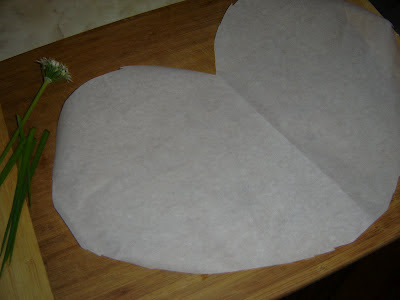 First cut out your 12x17" rectangles, then make a heart out of them by folding in half and cutting.  Now get all your ingredients ready. 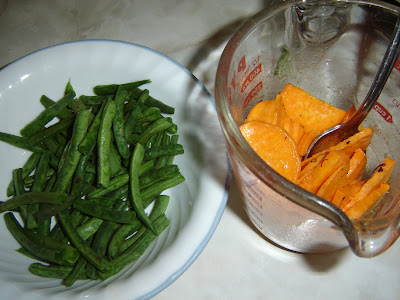 I tossed the raw veggies separately in a mixture of melted butter, saffron, salt and pepper, then put the potatoes on the bottom, followed by green beans, and lobster tail, topping it all off with slivers of salted lemon and pats of butter. 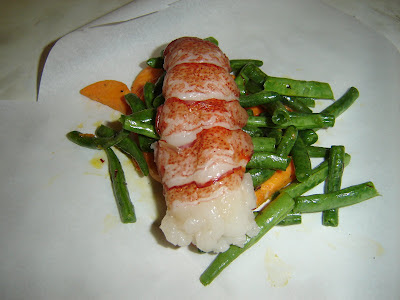 You just make a nice little stack on one half of the heart.  Pretend you're a fancy chef plating up your creation. 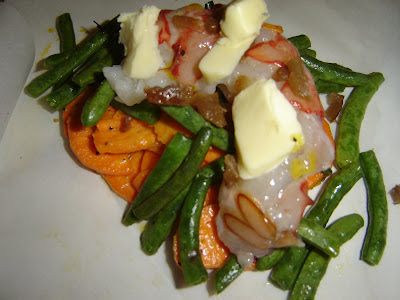 And, remember the butter is good for you.  Everyone needs some healthy fat in their diet, to make sure all those fat soluble vitamins get utilized. 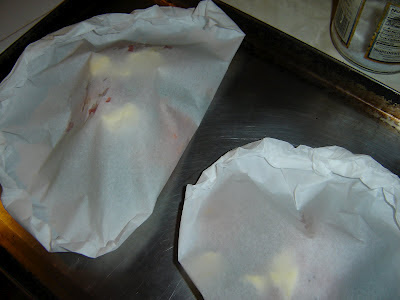 Now fold the other side over so the edges meet, make a seam, turning up a 1/2 inch or so to close the opening, then crimp little pleats to secure the edges.  Before closing off the top I added a tablespoon of white wine into each of my packets.  Bake at 400F for 15 minutes.  Let the packets sit for a few minutes before opening. 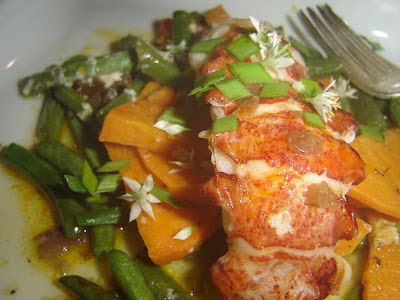 Just fabulous, decadent and so delicious with the saffron, butter and lemon scented lobster, the sweet potatoes and green beans done to perfection and then sprinkled with chopped chives.  Make yourself some and enjoy!

I still want to make the prosciutto wrapped asparagus, which was one of the recipes provided by our Daring Chefs hostess .  I'll add the directions for it after the break, as it is a bit different, being slow-roasted.  Our markets were out of asparagus, so my trial on that one may have to wait.

Continue reading>>
Posted by Claudia at 1:00 AM 9 comments: 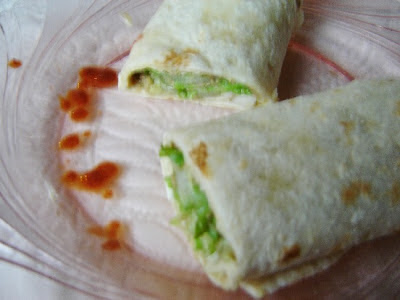 Continuing with the salad variations for summer theme, this is a salad  burrito, which was inspired by a salad pita I saw online recently.  Pita, burrito, sandwich, breadlike thingy you put stuff in.

I have a long history of rutlike things I do.  One of which was only buying corn tortillas.  Recently I broke the mold, went hog wild and bought some flour tortillas.  So, we had a few. 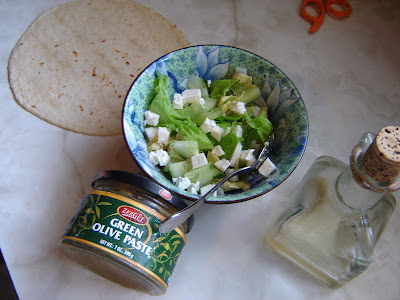 This is not a recipe.  You don't need one.  It's just a thought.  Something you might like to try and then say, wow, so glad I did!  Many variations are possible.  I used feta, but you could lay some Mexican cheese on the hot tortilla, let it get a bit melty and then add on a bit of salsa and the salad.  I used Green Olive Paste or Tepenade, and that was quite tasty. 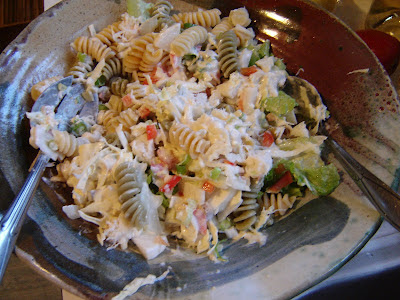 Going with the proposition that one can never have too many salads in the summertime, (and yes, you can be too thin - think anorexic) we have found another winning combination.  One with crunchy things, savory crabby notes, some green, some red, a carb or two (got to love those colored spirals), a hit of salty capers and a bite of daikon dice.  Just what your day needs to finish in a satisfying manner.  The actual elements can be varied according to what's available. 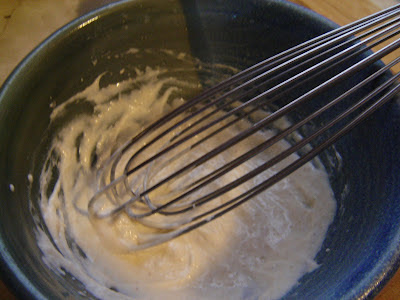 The dressing has its own thing going with mayo and mustard, kefir, squeeze of agave nectar and lemon. It aims to please.  I think we need jolts of high intensity flavor when the weather is warmer.  Not to mention HOT.  It's not really here, but I know some of you are enduring real scorchers.   On the other hand, you folks in Australia and NZ might be more in the mood for hot stews.  With a side of Crab and Pasta Salad

Continue reading>>
Posted by Claudia at 10:23 AM 3 comments: