Cinnamon and Gunpowder with African Yam 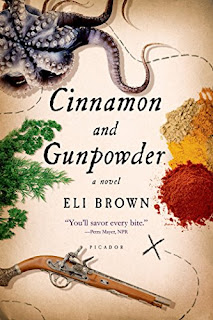 Cinnamon and Gunpowder, by Eli Brown, was a jolly good read for sure, and our Cook the Books Club selection for October/ November.  I am hosting this event, which is coming to a close on the 30th of November. What we do in this online group is read the current book selection, and then cook something inspired by our reading, post about it, then send your link to the host, or add in the comment line at the Cook the Books site.

I thoroughly enjoyed this very unique story, perhaps some might say an implausible one. But keep in mind the time, people and politics of the day, the places involved. There were pirates then. Life was very difficult for the poor, especially for women on their own. And, we do know from historical records that there were women pirates. Overall, what an amazing adventure!

From the Publishers:
"A gripping adventure, a seaborne romance, and a twist on the tale of Scheherazade—with the best food ever served aboard a pirate’s ship

The year is 1819, and the renowned chef Owen Wedgwood has been kidnapped by the ruthless pirate Mad Hannah Mabbot. He will be spared, she tells him, as long as he puts exquisite food in front of her every Sunday without fail.
To appease the red-haired captain, Wedgwood gets cracking with the meager supplies on board. His first triumph at sea is actual bread, made from a sourdough starter that he leavens in a tin under his shirt throughout a roaring battle, as men are cutlassed all around him. Soon he’s making tea-smoked eel and brewing pineapple-banana cider. 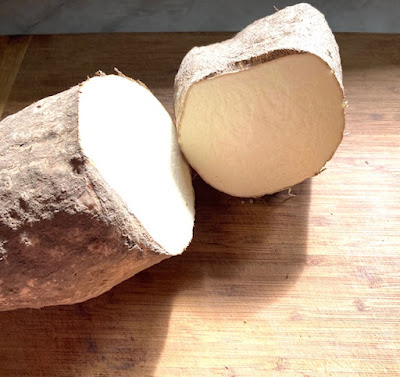 There was plenty of food inspiration here.  Everything from potato flour crusted cod on a bed of saffron rice, walnut crisp cakes with figs and shrimp in a dark, fragrant red wine reduction, to a Spanish bean stew.  At one point they capture a ship on which are barrels of pepper, and as it is off the coast of West Africa, the Ivory Coast, I am speculating there may also have been among the cargo, aside from the peppercorns and ivory, various vegetables from the area.  Perhaps some Ghana yams, aka White Gunea Yam or Puna yam, considered the most important food staple in West Africa.  Items not for eventual trade, but for their own use at sea.  Remember that "potato" crusted cod?
See above, my yam from Ghana.  A dual purpose vegetable here.  Half I cut up and cooked.  The other was put aside for planting.  And, what a surprise!  Not like any yam or sweet potato relative I know.  It is very close to potato.  Some of the cooking half (note - it was a 5 lb.  tuber) I boiled, then served with a stew.  Some was sliced and fried, the rest I boiled and mashed to have with turkey gravy.  Love this yam. 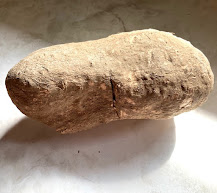 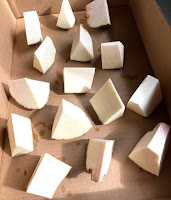 The reserved half, as per online directions, I cut into what they call "setts" a size of between 60 - 100 grams.  Dusted with wood ash and left to air dry for a day, then laid on the ground under my lychee tree, sprinkled with potting soil, then lightly covered with leaves.  Now we wait for the sprouts to come up.  Lord willing! 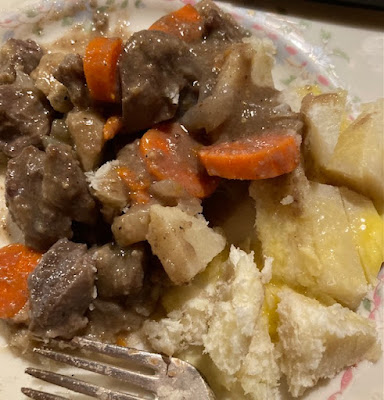 Here with an elk stew.
The pictures don't do it justice.  But for a tropical potato substitute I am excited.  Our fictional chef would not have been into growing it, but happily using this yam in creative ways aboard the ship.
There you have it, and stay tuned for the round-up, which I hope to have posted by December 2nd. I will also be sending the link to Weekend Cooking, hosted by Marge, the Intrepid Reader, and to Heather who hosts the Foodies Read Challenge.  Be sure to visit these sites for some great book suggestions and food ideas.
Posted by Claudia at 10:03 AM 5 comments:

Time to Eat with Nadiya Hussain 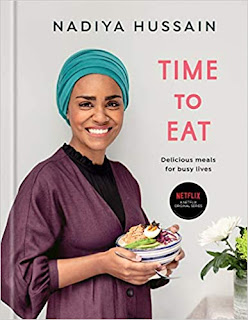 After reading a review of Time to Eat by Nadiya Hussain, which sounded quite intriguing, I promptly checked it out of the library, with the test before buying idea in mind.

I noticed right off that she generally prepares large amounts of a meal with the idea of freezing a portion.  She uses her freezer A LOT! I don't know about you, but no matter the larger freezer I now have, it is always full, with barely enough room to squeeze in more stuff.  I'm trying to avoid getting a separate freezer unit as it is hard enough getting the one we have in order and under control.

According to her Publishers:

"Nadiya Hussain knows that feeding a family and juggling a full work load can be challenging. Time to Eat solves mealtime on weeknights and busy days with quick and easy recipes that the whole family will love. Nadiya shares all her tips and tricks for making meal prep as simple as possible, including ideas for repurposing leftovers and components of dishes into new recipes, creating second meals to keep in the freezer, and using shortcuts--like frozen foods--to cut your prep time significantly."

I'm also a great one for "repurposing leftovers" things that I shove in the fridge rather than freeze.  At the same time, she uses more prepared foods than I do, which actually I try to avoid, such as canned corned beef, fish pie mix, store bought crepe pancakes (I would use any extra I had from making crepes), precooked rice, etc., and difficult to locate items. Maybe I'll be able to find some canned, pressed cod roe one day, don't know.  I've checked several stores to no avail.  Guess it's Amazon for the truly serious.   All in all, fine for those with big time constraints.  If you discount the search for unusual ingredients. 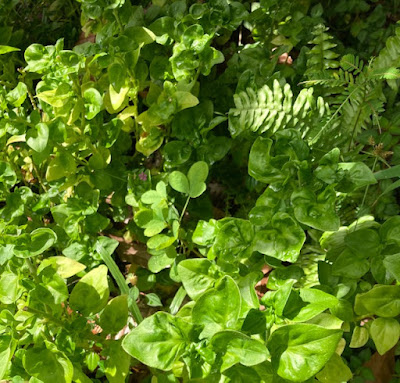 To try the recipes out, the first thing I made was from the front section, her Avocado Pesto, thinking to use some of our current abundance.  The recipe also called for "a handful of frozen spinach" (?) :) for which I substituted a handful of my garden Brazilian spinach.  It was a nice smooth type of guacamole, good with little crackers or chips and to top cheese on toast. 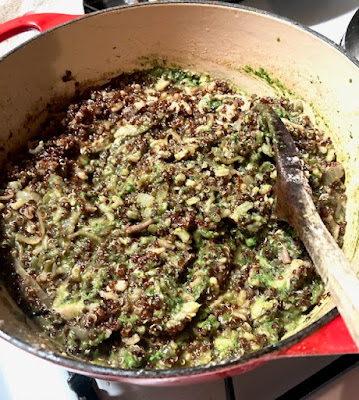 Next, I wanted to give Nadiya's Watercress Quinoa Kedgeree a go, which would be an excellent use of some red quinoa lurking in the bottom of my Rice Etc. container.  Normally a kedgeree would feature leftover rice, and I did add in some when the liquids didn't evaporate, as per the time given in her recipe, and whilst we were waiting on dinner.  Also I didn't have any cans of smoked trout on hand.  Though did try to find it at my usual natural foods market, as well as at the supermarket, but no go.  Subbed out with a can of sardines.  In addition, the recipe called for Bengali spice mix, for which I prepared her recipe at the back.  Wonderful, as it incorporated quite a few miscellaneous seeds that don't get used as often as they should.  Now I have extra of an amazing spice.  However, the time indicated for the total meal prep was quite a bit off. 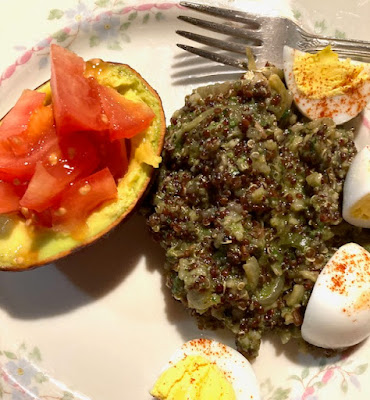 So, it's all good, though you couldn't call this an easily put together meal.  She adds quartered, hard boiled eggs on the side, and I think a poached egg on top would also be lovely. We had some chopped tomato in avocado halves as a side. 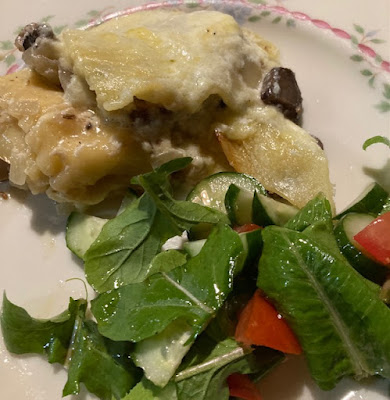 Ms. Hussain also included an interesting slow cooker lasagne preparation, for which I had some reservations, due to the indicated relatively short time on low setting.  Checking other recipes, they all called for longer cook times.  However. being game to try things, and by then running short of time, we went ahead with good results.  I did add a dash of white wine, and used one can Crimini mushrooms along with a cup or so of fresh button mushrooms.  Also, cut the whole thing in half, as I was not making the extra freezer prep. (which actually made following her directions somewhat confusing).  Sometimes it's hard for me to keep from fiddling with things. 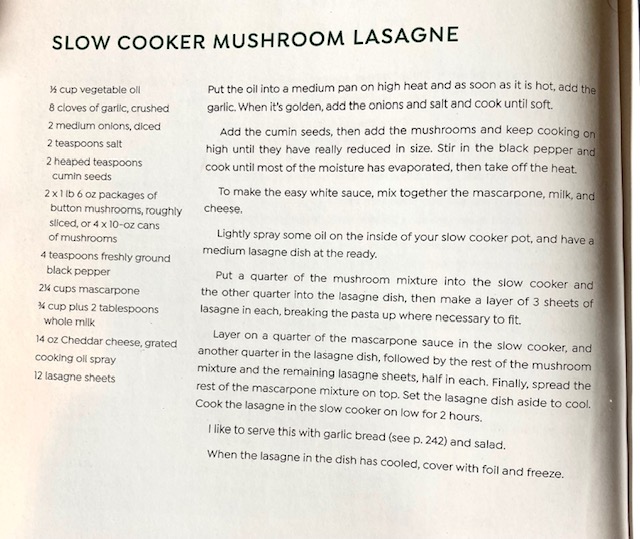 From Time to Eat, by Nadiya Hussain

With a side salad, this lasagne made for a perfect meal, and fairly easy to put together.  I'll be linking this post up to Weekend Cooking, hosted by the Intrepid Reader, Marge, and with Heather at the November edition of her Foodies Read Challenge.  Be sure to check out both sites for good book and cooking ideas.