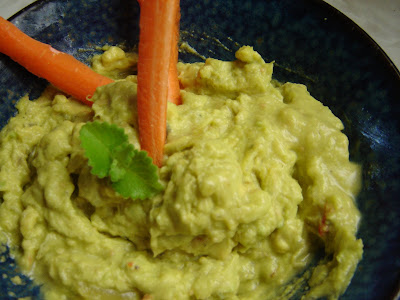 Guacamole responds nicely to the tang of tomato, though that does seem to dull things out color wise.  Red being opposite on the color wheel, you could create some gray if you were dabbling.  Tomatillos, on the other hand, being green(ish) and also being on the tangy side are the bees' knees.  I think they used to say that way back in the day before the day.  Besides which my garden happens to be jumping with them at the moment.  Not that either substance here is a vivid green, but we don't want to muddy things up more than we have to.  Those few flecks of red chili pepper keep to themselves pretty much. 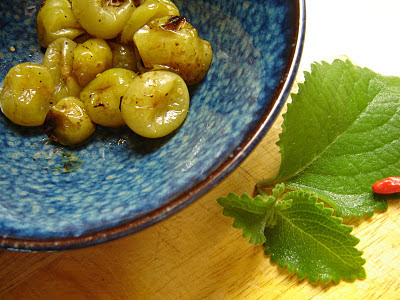 You only need one tiny Hawaiian chili pepper to get a good zap of hot.  A bit of Cuban oregano, just because it's from South of the Border, a plant that grows wild in the tropics, it's actually Plectranthus amboinicus,  a tender fleshy perennial plant in the family Lamiaceae with an oregano-like flavor and odor.  Some people call it Cuban Oregano or Mexican Mint.  Nothing like mint.  Don't be calling it that. 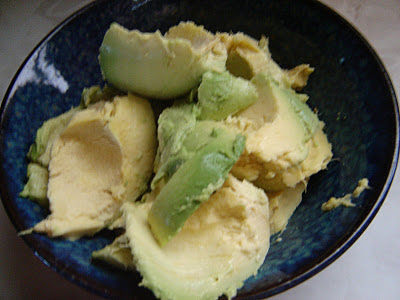 I add a little chopped onion, salt and lemon juice for overall yummyness.  Also, char broiling the tomatillos is a way of cooking them to bring out maximum flavor.  So, you do that first.  Then let them cool while you're mashing avos and chopping things.
Continue reading>>
Posted by Claudia at 4:09 PM 5 comments:

Making Kefir Cheese or "Grandma you could die!!" 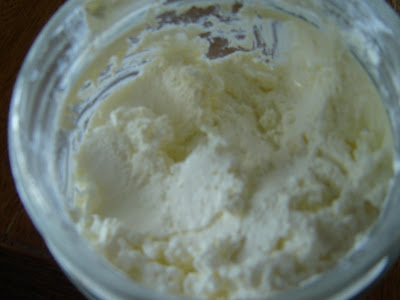 On a recent post about my experience with making kefir at home, I mentioned that my next experiment would be using that kefir to make cheese.  My granddaughter was here, so thinking she might like to be involved, I told her about my plans.  I said, for Brie or Blue Cheese, we can scrape a bit of the mold off some purchased cheese, and use it to inoculate ours. When she heard that I would be MAKING CHEESE AT HOME, it seemed to terrify her.  I hardly knew what to say, I was so shocked by the reaction.  Of course, being on the cusp of teendom, she has been lecturing me on various subjects, so I should have been prepared.   "Grandma, don't you know there are thousands of bacteria out there, how are you going to know the mold is safe???  You could die!  I'm not eating any."  Grandma is known to live dangerously; eating mushrooms growing out in the wild, making wine and yes, cheese.

Continue reading>>
Posted by Claudia at 10:00 AM 7 comments: 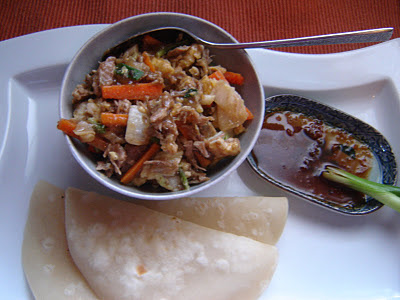 This is a tale of two dinners.  The first, due to major pancake error, was served on rice instead of the cute, authentic Chinese Pancakes.  And, just so you know, those pancakes do roll out very nicely.  The dough is easy to work with, the recipe simplicity itself.  Just don't stack your uncooked, painstakingly rolled out, darling little cakes, cover them with a damp towel, and then go have a wine and chips break.  It won't work.  You will come back to this: 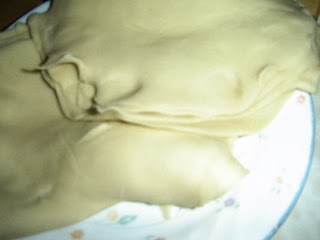 A gooey, stuck together pile of unusable dough, which you will then have to throw out, muttering under your breath (we won't curse, will we?) and have another glass of that wine.

Also, I must confess, that whilst rolling out the pancakes, there was already some mental grumbling going on.  Like making a batch of crepes is so much easier, and you can use flour that isn't white refined, and said to be bad for you, plus which there are lovely eggs, butter and milk in them.  This is taking too long, I'll never do this again, blah blah blah.  So after all that work, to face actually doing it again, was God teaching me a lesson almost too much, but we persist with challenges around here.

The October Daring Cooks' Challenge was hosted by Shelley of C Mom Cook and her sister Ruth of The Crafts of Mommyhood. They challenged us to bring a taste of the East into our home kitchens by making our own Moo Shu, including thin pancakes, stir fry and sauce.  Deh-Ta Hsiung, a renowned authority on Chinese cuisine, published a beautiful book called The Chinese Kitchen, which was a source for our recipes.

For round two I used the alternate technique given - squished together double pancakes with sesame oil in between, which you pull apart, after cooking.  Just to vary my life. BUT NOT leaving them stacked, uncooked with a damp towel over.  We frequently learn our lessons the hard way.

For the pork stir fry section of the recipe, I used a precious, naturally raised, too expensive, pork butt.  On the plus side, it was slow roasted for our Sunday dinner of pulled pork tacos (which did taste fabulous), leaving plenty left over for both of my Moo Shu attempts.  So, we did get three dinners out of that yummy butt.  My personal opinion of canned bamboo shoots and dried black fungus, being what it is, (say no more) I substituted slivers of fresh carrot and shitake mushrooms.  I will give the recipes unchanged however.

Continue reading>>
Posted by Claudia at 7:16 AM 10 comments: