The Lentil Salad to Die for, with Mangoes and Arugula 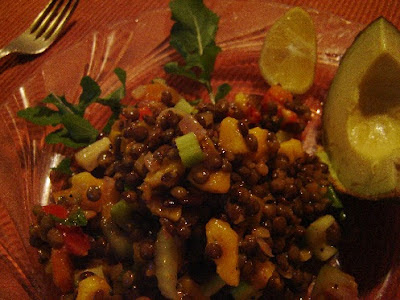 What in the world would summer be without salads?  Yes, a rhetorical question.  The answer being obvious.  When we are wilting, possibly melting into a puddle of sweat on the kitchen floor, who in their right mind wants to turn on that blasted oven?  No one, that's who.  We start thinking, from our nice lie down on the cool floor, of various and sundry salads. 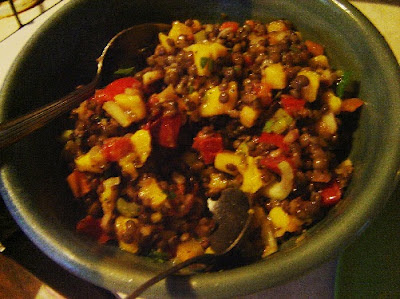 This one begins with a foundation component of healthy flavor and protein, the lentils called in France, du Puy, renowned for holding their little shapes whilst being tossed about in a bowl with compatible associates.  We don't want mushy here.  This is not a curry.  It is a carefully composed work of art, with jewel like color, varied textures and loads of flavor.

Continue reading>>
Posted by Claudia at 11:00 AM 2 comments: 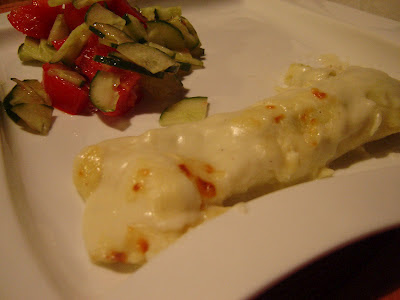 I was shocked to discover that Italians do not put chicken with pasta.  All these years I have been doing it  wrong.  Of course, I was also calling mannicotti, cannelloni.  And using the terms interchangeably.  Bad, bad, bad.  What was on my menu as cannelloni, it turns out, was actually mannicotti, since I have always used crepes instead of pasta.  Well, except when I bought the tubes of dry pasta on occasion.  So there you have the history of my culinary wrongdoing.

Manu from Manu’s Menu was our Daring Cooks lovely June hostess and has challenged us to make traditional Italian cannelloni from scratch! We were taught how to make the pasta, filling, and sauces shared with us from her own and her family’s treasured recipes!

I am now on a reformed course.  However, possibly I wasn't too, too off the mark, as far as chicken goes, since technically, the filling was in CREPES, not pasta.  So there.  It has always been a very handy way of using up a bit of left-over meat. 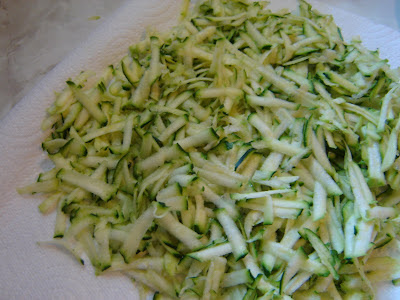 I decided to do the Cannelloni di Magro version of the various ones suggested, using grated zucchini instead of spinach.  According to our hostess, “Magro” means “lean”, but when used in a recipe it actually means “without meat”, so it is a vegetarian dish."   Our market's organic spinach selection didn't look all that great, so going with locally grown zucchini seemed a better bet, especially paired with some fresh garden herbs. 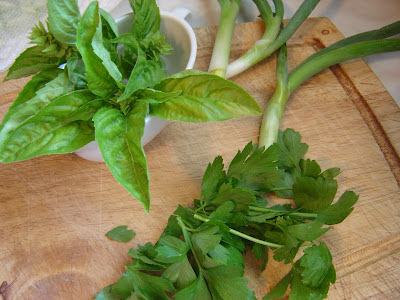 A few green onions, basil and parsley were added to kefir cream cheese, Monteray jack, which I happen to prefer to mozzarella (so kick me) and parmesan Reggianito cheese, mixed together with the grated zucchini for my filling.  After grating your squash, be sure to salt and drain on paper towels for 30 minutes or so.  Then squeeze any extra liquid out before adding the other ingredients. 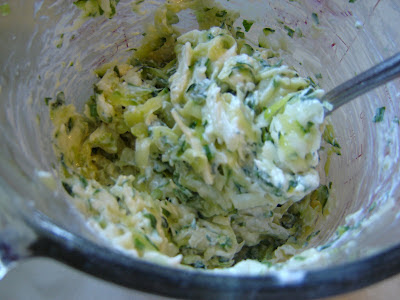 The directions for the bechamel sauce and the pasta I followed as given.  I did notice that the amount of flour called for was more than what I usually need, but did it anyway.  Yes, as it turns out, I had to add more milk (and some wine) to get it right.  Other than that, everything went great.  The pasta was as easy as doing a batch of crepes.