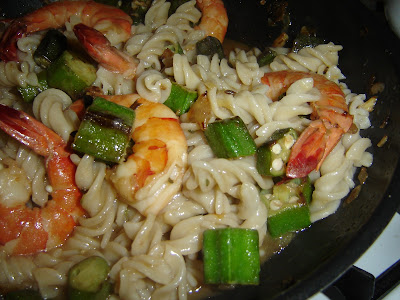 Gumbo, after all, is another name for okra, one of my favorite vegetables, and as it is being supplied by our CSA, on a fairly regular basis, we are eating it more often.  But, it was those gumbo spices of  hearty soup/stew fame that inspired me here.  The red pepper flakes, thyme, oregano, basil and garlic, the shrimp stock, butter, wine, and shrimpies, oh yes. 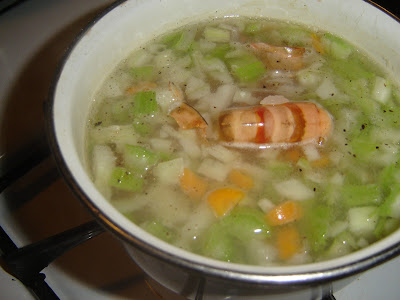 I decided to make a shrimp stock for this dish.  That's pepper on the cooking stock, not little bugs.  Just so you know.  Reserve all your shells, heads, whatever, and add a bit of minced carrot, celery and onion, salt and pepper.  Cover with water and simmer about 30 minutes.  Then, strain and add about a 1/2 cup of white wine.  Now, reduce the heck out of it while you're assembling the rest of the dish. 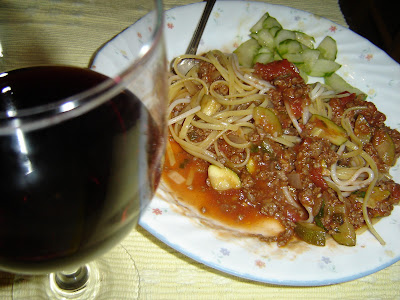 Yes, the spaghetti is named after the wine.  I couldn't resist, and  it does contribute that special bit of extra zip and depth.  To a cognoscenti, I'm sure there is way too much of the ragu to the amount of pasta on that plate, but when the "condiment" is to die for, it is excusable.  Use as much as you like. 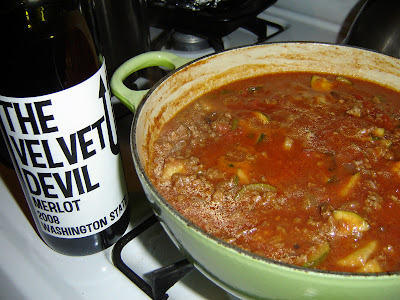 Everyone has their favorite recipe, or do they?  I seem to change mine a bit every time I make a beef spaghetti sauce.  If there are zucchini on hand, in they go.  Celery (if I have it), olives, onions (of course) and garlic (lots) along with the ground beef.  And, a good red wine.  In this case, The Velvet Devil.  Bet they sell cases of that on the name alone.  At any rate, I'll share this version, since it was soooo good.

Continue reading>>
Posted by Claudia at 11:10 AM 4 comments:

They Can't Be That Easy Pickled Vegetables 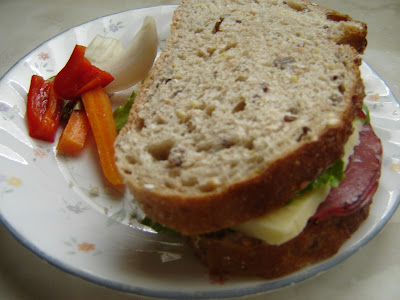 That was my exact thought when I read Michael Ruhlman's recipe for naturally pickled vegetables, in his book, Ratio.  No way.  Don't I need to get my pressure cooker out?  Do something else??  That's IT?  Just make a simple brine and stick my vegetables in there?  Well, apparently yes, as it worked magnificently, beautifully and best of all, easily.  Though, this photo was taken after a good quantity of the vegetables had been removed and eaten. 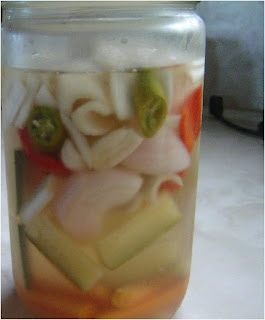 You may be tired (all 2 of you) of hearing the ways I have been trying to use up my CSA veggies during the week, but this was another of those last ditch attempts. And, a great, quick alternative, or addition to salad for a side dish.

I had some bok choy, to which I added zucchini, onion, carrots, and a few other things.  Use what you have on hand.  Some Cauliflower would be delightful, as would your old standard, baby cucumbers.

Continue reading>>
Posted by Claudia at 11:45 AM 2 comments: 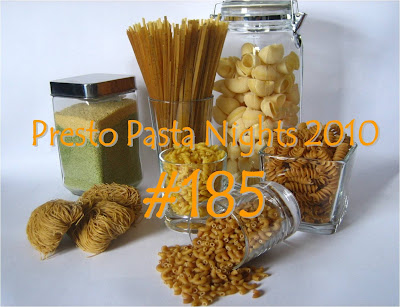 When Ruth, of Once Upon a Feast, founder and sustaining force behind Presto Pasta Nights,  asked me to host this week's event, I was excited to jump in.  You get more noodles here on a weekly basis than can be believed.

First up was amazing Deb of Kahakai Kitchen, another fellow food blogger from Hawaii, with a comforting Bean and Pasta soup, Pasta e Fagioli.  Cooler weather is welcome when it brings in these delicious soups and I can't wait to try this one. 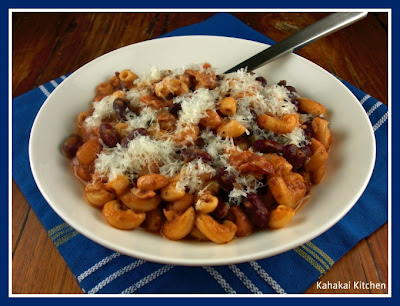 Next, we have Madge, Vegetarian Casserole Queen, with her Mediterranean Pasta Salad, which she says is on her family's monthly rota and should be destined for mine as well.  We love pasta salads around here, and this one looks so tasty. 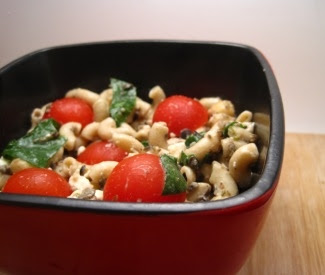 Amritha of AK's Vegetarian Recipe World sends us her light and healthy Spaghetti in Tomato Basil Saute.  This should be just the quick and easy thing to fix when you're in a rush or feeling tired. 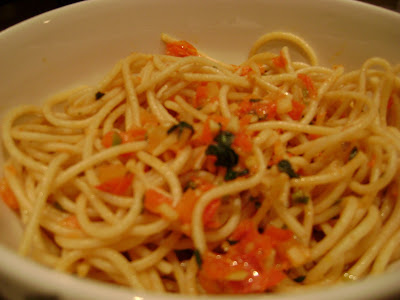 From Australia we have Teriyaki Lamb Macaroni, dished up by Daphne of More Than Words.  I love lamb, and this stir-fry meal would be fantastic for any left-overs from a nice roasted leg, so colorful with all the vegetables and flavorful with spices. 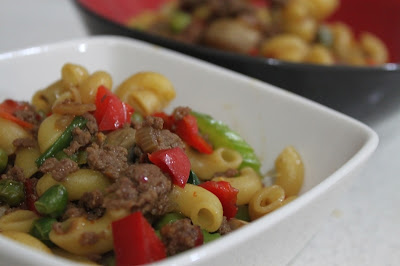 Corina of Searching for Spice, has sent us her personalized version of a Chicken Pad Thai.  Soooo yummy, and I can't wait to try this recipe myself, as we love Pad Thai at our house. 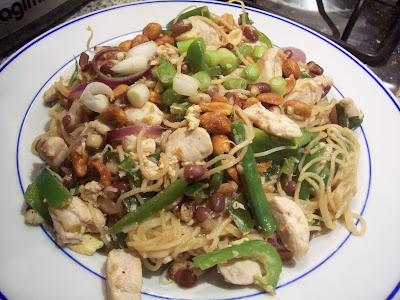 From Yasmeen's Health Nut blog, another colorful, tasty dish, and right from her amazing garden, Garden Fresh Vegetable Rotini Salad.   I am jealous of anyone able to grow all those vegetables at home. 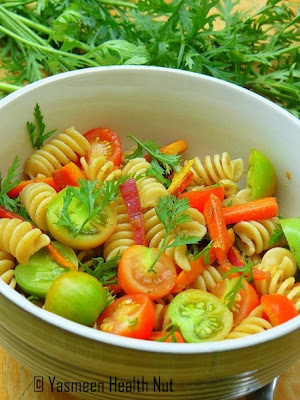 Ruth, our fearless leader, of Once Upon a Feast, has made a unique and onolicious (Hawaiian word meaning yummy) sounding Whole Wheat with  Pumpkin Mac 'N Cheese.  Boy, I'll have my grandkids over for that one.  And, in time for Halloween too. 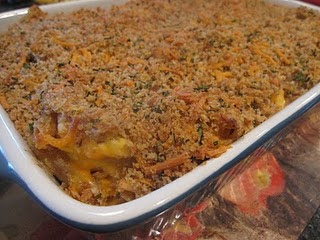 Finally, my, Honey From Rock contribution of a Dairy Free Beef Stroganoff, which was finished with reduced almond milk.  I was a little disappointed that more almond flavor didn't come through, but I suppose that would have competed with the lovely flavors of tender beef and mushrooms. 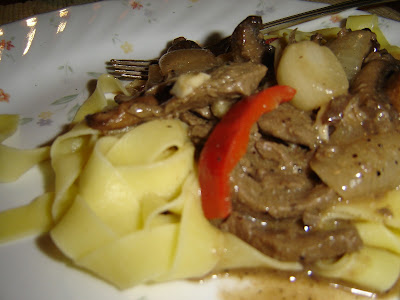 All in all, a well-rounded potluck gathering of delightful dishes from around the world.  Thanks everyone for sending in your contributions, and I for one, am going to enjoy trying them all!
Next week our host will be Claire of Chez Cayenne. 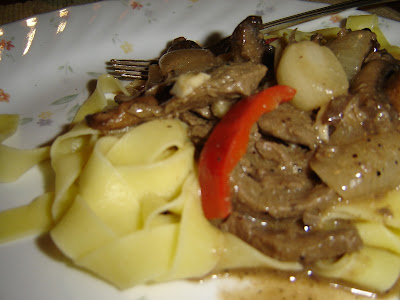 This coming week I will be doing the hostessing for Presto Pasta Nights, (#185) a first for me, hosting anything that is. If you've never participated, this will be a great opportunity to share and broaden your noodle horizons.  Pretty simple - fix something with pasta, take a photo, post about your dish, and send your post link to me, claudiariley (at) yahoo (dot) com and a cc to - ruth (at) 4everykitchen (dot) com. by Thursday, October 14.  Ruth of  Once Upon a Feast, is our founder and organizing genius for the past several years.  The round-up should be posted by Friday, late.

My contribution, as you may have guessed, is this Beef Stroganoff, a favorite at our house for a good many years, and possibly one of yours too.  Though, last night's reincarnation was meant to be a departure from the tried and true, into the area of low to no dairy.  Instead of the usual sour cream, it was reduced almond milk, based upon an assumption that reduction would intensify the flavor.

To tell you the absolute truth, I prefer cream.  Everything we do does not result in a standing ovation.  It's not all a gigantic success story.  Though, I'm not saying  the meal was not delicious.  Just that cream tastes better.  My opinion.

Continue reading>>
Posted by Claudia at 8:43 AM 8 comments: 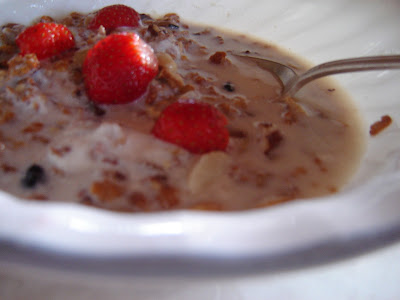 I know I'm dating myself, but so what??  I think this recipe has its origin sometime in the '60's. Since Bob has been going through granola lately like there's no end in sight, I've begun making it again, to save ourselves a bit of hard-earned cash.

Granola is very forgiving, not to mention flexible.  And, I had forgotten just how easy it is to make or how good it can be.  The house smells lovely right now with all those toasting grains, from the current batch. 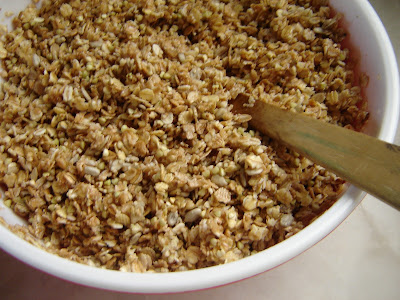 Everything is basically dumped into a big bowl.  Stirred around a bit and then baked in a slow oven (250F) for 2-3 hours.  Then you can add whatever dried fruits or nuts you want.  I'm going to add in some Brazil nuts that need to be used, toward the end, so they get a bit toasty.