Mulligatawny Soup at the Palace 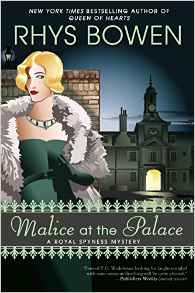 Author, Rhys Bowen's Royal Spyness Mystery series, is unfailingly engaging, and this latest, Malice at the Palace is no exception.  I so look forward to each new book.  Set in 1930's England, they feature a young woman, 35th in line to the throne, with unfortunately, no money to go along with her title, who manages to survive, one way or another, often helping out the Queen with a problem.

In the course of her newest adventure, Lady Georgiana finds herself having supper with the aunts, which the Prince of Wales calls "the Aunt Heap", at Kensington Palace.  And, sure as shootin', the mere mention of their supper, consisting of Mulligatawny Soup, roast pheasant and apple dumplings, was all I needed.  I'm not a masochist though; and not having a sous chef, a normal supper, around here doesn't usually include pheasants, or fancy dessert either.  That soup was in however, simply spiffing, as Georgie would say.

As per Wikipedia, Mulligatawny Soup:


"is an English soup after an Indian recipe. The name originates from the Tamil words mullaga/milagu and thanni and can be translated as "pepper-water".  The original version of this soup consisted of a broth from lentils, fried onions and curry powder. Today it normally designates a thickened soup that is strongly spiced with curry powder and nutmeg. Often, strips of vegetables, nuts and rice are added."

Anglo-Indian food then, and appropriate for English royalty. 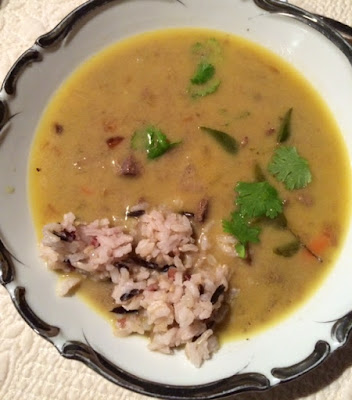 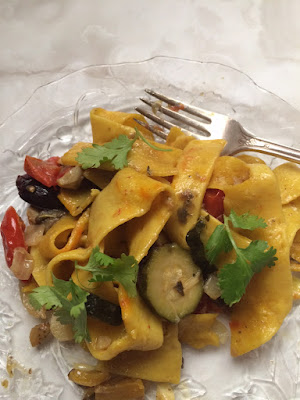 I'm the sort of weird individual who has fun making something like noodles.  Truthfully, I found myself humming a tune and saying under my breath, this is FUN!  Really.  And it was. Especially hanging them up on coat-hangers from a cupboard hinge. 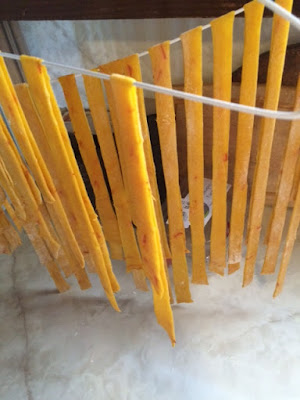 Again with a recipe by Yotam Ottolenghi, from Plenty.  My choice for this week's potluck chef theme at IHCC, but of course.  Have I mentioned already how absolutely inspiring that man is? He served it up (in the book) with spiced butter, however having stated earlier that Ratatouille is lovely the next day, I thought, how perfect to toss with the tagliatelle.  I was going to call this post "Pricey Pasta" as the recipe calls for an entire  2 teaspoons of saffron, though I did cut the whole thing in half for the two of us.  Less to roll out, even more enjoyable.  You can find the recipe here also. 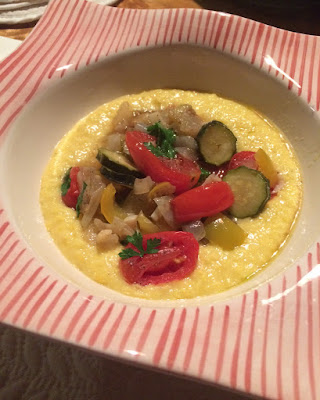 Yikes! This polenta is so darn yummy.  A very comforting, smooth, slightly sweet and savory porridge.

Occasionally I will make polenta as a backdrop for my Ratatouille, which in itself is pretty fabulous, but when I came across Ottolenghi's Sweet Corn Polenta in Plenty, I knew we were going there.  And, no sooner was that thought in mind, than there was fresh corn in the market begging me not to pass on by.

I should have totally dished up for both of us, but just scooped Bob's polenta into his bowl and left it for him to add on the Ratatouille.  So, of course he just tucked into that corn porridge like there was no end in sight,  saying it was too good and wanted it all by itself.  Only with seconds did he condescend to top with the "main dish".

What can you do?  At least I had my bowl for a photo. This fresh corn polenta will be a regular item on our menus in future, especially as it turned out to be very easy and much quicker to make than the usual sort, something else in its favor. 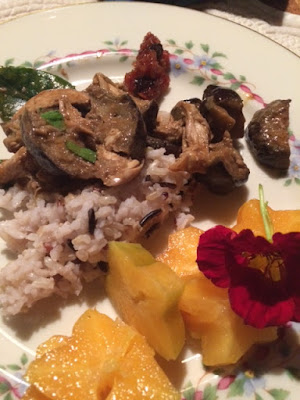 This is not only my first time with I Heart Cooking Clubs, (IHCC) but a first with this week's featured chef, Madhur Jaffrey.   I don't have any of her cookbooks as yet, though Indian cooking is a longtime favorite of mine, so this Chicken Thai Red Curry was sourced from the BBC Recipes pages.  Not strictly Indian, but a Thai version of curry.  Just as a side note: do you think it at all apropos that my current read happens to be The Case of the Deadly Butter Chicken by Tarquin Hall??  Well, I thought it was funny.

I substituted eggplant for the canned bamboo shoots (sorry just hate those), and took the easy course, by not making my own red curry paste, as we have a very good brand available here, and using my left-over teriyaki chicken.

Crabby Patties or Don't Look Gift Crabs in the Mouth 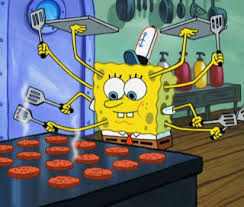 It all started with a gift from Alaska, air-shipped frozen, crab.  A lot of it.  Bob is not too happy with shellfish, or any fish really, unless it's ahi tuna, small amounts of mahimahi or ono.  But he is a Sponge Bob fan, so I said we were going to have Crabby Patties!

Coincidentally, I was at the hairdresser's that day,  flipping through magazines, waiting for my turn, and spotted a recipe for "crab cakes".  Yes and almost copied it out by hand.  But, having joined the techno age, realized in time that my iphone would do it for me. Perfect timing for our crab.

I emailed my friend, Linda, to see if she would like to help with all that prying out of meat from shells, for a good share of it. Thus a crabby party was hatched.  Good kitchen shears were useful, ice pick, pliers and nutcracker.  We set to work, ending up with 3 pounds of shelled crab meat.  And relaxed after with glasses of lemon mead and chips. 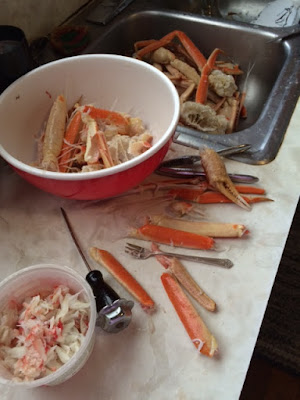 Sorry Bob for a very crabby week-end, ha ha.  We had not only the Crabby Patties, but crab with melted butter, lemon and new potatoes, Crab Quesadillas and Crab Salad Niçoise.   I hear Linda enjoyed her share as well. 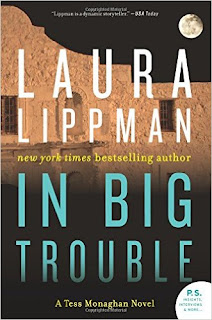 Tess Monaghan is In Big Trouble, actually investigating it in Laura Lippman's  book by that name.  Her search for missing boyfriend, Crow, takes her to Texas and a love/hate relationship with that state.  Loves, loves, loves the food, and hates the actual place; though she does come in the end to more of a liking, at least for San Antonio.

Pretty funny the way she wolfs down the local specialties at every opportunity, in between tripping over dead bodies and solving some mysteries.  At one point Tess wanted to stand up in a restaurant and shout "Where has this stuff been all my life?"

If you can get through the book without getting down and cooking Mexican, or at least going out for it, you have more self-control than I do.   Actually I didn't get past page 2, where a character is having breakfast at the Alamo; coffee, barbacoa tacos and an elephant ear pastry.  Well, okaaaaay, so we had to check out those mystery (to me anyway) tacos.

Where the work barbecue comes from apparently.  A quick search led right up to making them, with the yummy slow-cooked and pulled BBQ beef; locating an avocado, and some crema. With of course, a good recipe to start it all off.   I wanted to use my pressure cooker, not having a slow-cooker, and to cut down down on total cooking time.  In the course of said research, I discovered that Hawaii is a Chipotles deprived state.  In fact I'd never heard of the restaurant chain prior to this.  Apparently they are famous for their Barbacoa Tacos, and there are Chipotles copy cat recipes out in cyber land.  But, perhaps I should first apologize for having two beef recipes in a row on this blog.  This one is terrific though, and puts the pressure cooker to good use.  That said, here it is: