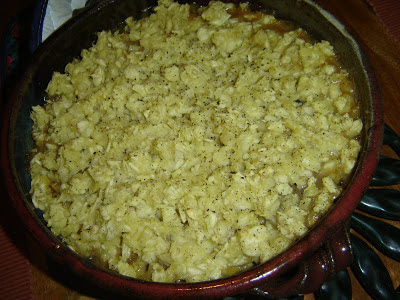 Sometimes known as Shepherds' Pie or Cottage Pie, aka Paté Chinois, a name I was completely unfamiliar with, albeit quite familiar with the dish itself in its many guises, a veritable staple in the use of left-overs.

Our Daring Cooks’ December 2012 Hostess is Andy of Today’s the Day and Today’s the Day I Cook! Andy is sharing with us a traditional French Canadian classic the Paté Chinois, also known as Shepherd’s pie for many of us, and if one dish says comfort food.. this one is it!

According to Andy, the name for this dish, Paté Chinois, "translates from French as Chinese Pie. It’s an odd name for a French Canadian dish that doesn’t have any connection to Chinese food. The history of the name has been traced back to the Chinese cooks who worked at the camps for the railway builders in the late 19th century. Ground beef and potatoes were cheap and a dish could be spread out to feed many people."

My inspiration for this round of Daring Cooks' was turkey and breadfruit.  Using what's on hand being the main idea behind a Cottage Pie.  I was stumped on what to call it though.  Post Thanksgiving Pie?  Paté Pilgrim?  Of course, it would be the Pilgrims to Hawaii.  A later period in time.  Oh well.

Continue reading>>
Posted by Claudia at 9:37 AM 6 comments: