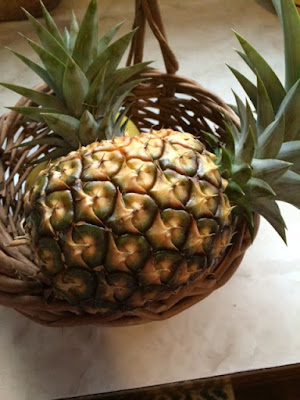 For the weekly theme at IHCC, (I Heart Cooking Clubs) it was Fresh & Fruity with our reigning chef, Curtis Stone.  Just in time for your Fourth of July barbecuing , was my thought, not to mention all the pineapples ripening up around the old ranch.  Which meant a change from the original recipe: for apple, add in a pine.

Potato, Cauliflower and Camembert Gratin for Surf and/or Turf 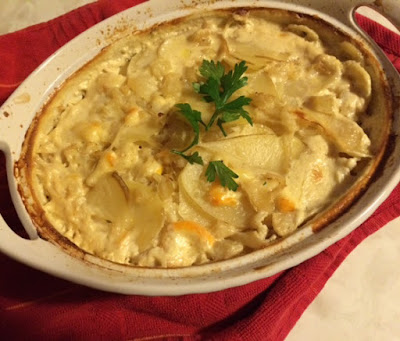 This week at IHCC (I Heart Cooking Clubs) it's a Surf and/or Turf theme, a recipe that features either surf (fish and seafood) and/or turf (meat, poultry, and vegetables) from our currently featured chef, Curtis Stone.  I had a nice looking cauliflower, and the potatoes, so this recipe in his book, What's for Dinner? was a natural, being from the turf side of the agenda.  I served the gratin with roast chicken rather than his suggested grilled pork chops. 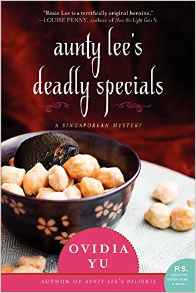 Aunty Lee's Deadly Specials is my second read in this little series by Singaporean author, Ovidia Yu, and so glad I found it!  Mysteries, with humor, troubling social issues, and lots of culinary interest.  Some of the food mentioned sounds quite intriguing, though not especially appealing to Western tastes perhaps, but again, much of it is.

I especially enjoy her philosophy, partially based as it is around cooking; as well as the way she uses herbs and dishes to calm and even heal.  Rosie is a compassionate, kindly and helpful character, who thinks about people and what motivates them with a purposeful sort of curiosity.  Aunty can tell so much about a person by what, and how he or she eats, which information of course helps with her sleuthing.

Book Description from the Publisher for those interested in it:

"Rosie "Aunty" Lee, the feisty widow, amateur sleuth and proprietor of Singapore's best-loved home-cooking restaurant, is back in another delectable, witty mystery involving scandal and murder among the city's elite
Few know more about what goes on in Singapore than Aunty Lee. When a scandal over illegal organ donation makes news, she already has a list of suspects. There's no time to snoop, though—Aunty Lee's Delights is catering a brunch for local socialites Henry and Mabel Sung. Rumor has it that the Sungs' fortune is in trouble, and Aunty Lee wonders if the gossip is true. But soon after arriving at the Sungs', her curiosity turns to suspicion. Why is the guesthouse in the garden locked up—and what's inside? Where is the missing guest of honor? Then Mabel Sung and her son, Leonard, are found dead. The authorities blame it on Aunty Lee's special stewed chicken with buah keluak, a local black nut that can be poisonous if cooked improperly. She's certain the deaths are murder—and that they're somehow linked to the organ donor scandal. To save her business and her reputation, she's got to prove it—and unmask a dangerous killer." 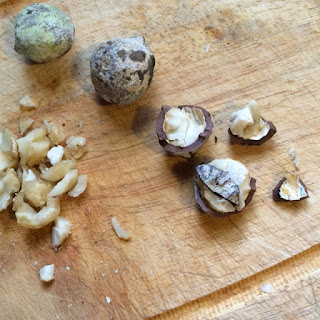 There was a recipe at the back for the famous "Deadly Special", which is not only a delicious Chicken Curry, but uses candlenut (kukui here in Hawaii) instead of the very rare jungle nut, Buah Keluak, frequently used with the dish in Singapore.  The author also suggests macadamia nuts can be substituted.  As I do have a kukui nut tree and few opportunities to use them, this "Deadly Special" had to be the inspired dish for my post. 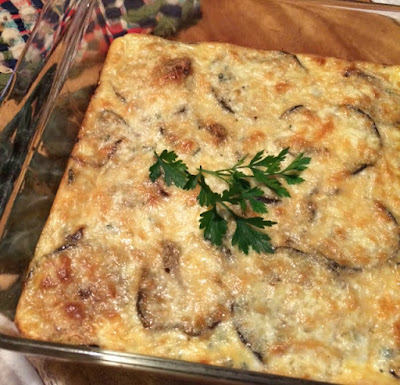 This was my first experience with cooking a Donna Hay recipe, thanks to IHCC (I Heart Cooking Clubs) and our weekly themes.  This week's was Chef Donna Hay, so I checked out her website for something to cook with what was on hand - an eggplant.  My only change was to swap out basil for some fresh oregano. 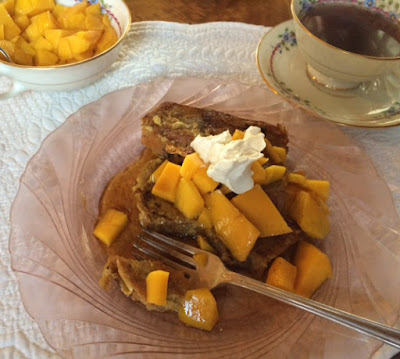 A sublime Cinnamon French Toast with Mangoes, courtesy of Curtis Stone, our featured chef at IHCC (I Heart Cooking Clubs), where this week's theme is Local and Seasonal.  It would not be possible to go more local and seasonal than mangoes at the moment.  Bob picked an enormous bagful from our tree yesterday, and it is now up to me to deal with them.  Even after all the giveaways there is still a lot.

Continue reading>>
Posted by Claudia at 8:47 AM 8 comments:

The Water Room Washes up a Savory Galette 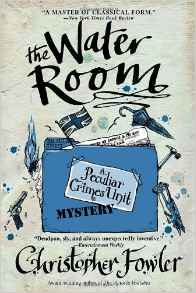 I've just finished my second Christopher Fowler novel, The Water Room, and am certainly looking forward to reading another.  He is the most amusing, witty and original author I've had the fun of reading for quite awhile.  Highly recommended.  Fowler features two older detectives, Arthur Bryant and John May, who head up the PCU (Peculiar Crimes Unit), in London, loosely associated with MI7.

Publisher's comments:
"Bryant & May’s investigation of a secret world beneath London begins when a woman is found in a dry basement with her throat full of river-water. In the quiet street where she lives, the residents are unsettled by the sound of rushing water. Further impossible deaths reveal a connection to the lost underground rivers of London, and a disgraced academic hunts an ancient secret that will soon be lost within the forgotten canals. Meanwhile it won’t stop raining, there’s a flood coming, and nobody’s house is safe as Bryant and May head beneath the city to stop a murderer from striking again."

And from the media:  ‘An imaginative fun-house of a world where sage minds go to expand their vistas and sharpen their wits’ – New York Times

All that aside, you can believe me when I insist this book is FUNNY, with a peculiar, dry British humor.   Just for example, the dead woman's son (who knows Bryant from an earlier case) comes to see them: "'I came to you Mr. Bryant,' said Benjamin Singh, 'because you have such an incredible capacity to be annoying.'  'I can't imagine what you mean,' said Bryant, stuffing his bentwood pipe with a mixture of Old Holborn and eucalyptus leaves.  'I mean you can get things done by badgering people. I don't trust the regular police.  They're distracted and complacent.  I'm glad you are still here.  I thought you would have retired by now.  You are so very, very far past retirement age."  Some of us might relate to that.

Continue reading>>
Posted by Claudia at 8:16 AM 10 comments: