The Savage Garden, by Mark Mills, was a pretty terrific novel, a mystery that turns out to be a double cold case involving a fifteenth century murder, cleverly memorialized in an elaborate Tuscan garden, as well as a more recent World War II murder on the same estate.  A young Cambridge student, Adam Strickland, is assigned a special summer project by his professor, with an introduction to the present owner, to research and prepare a thesis on her garden with its intriguing sculptures.  Adam is enchanted and drawn in as he proceeds to work at unraveling and exposing some well hidden truths, underlying the garden's unusual iconography.  Stir in a nice fillip of romance and well done Mr. Mills!

Though Adam rattled through France on the train to Italy and Signora Docci's villa in Tuscany, I thought this recipe, a simply prepared fish with a bit of complexity, might have been served in the dining car, albeit with a more Mediterranean variety of fish.  I've made this twice now, with mahimahi as well as with Monchong, a similar lightweight white-fleshed fish with good flavor, and loved it both times.  Basically a browned butter sauce with lemon and capers, quickly tossed together after sauteing the fish. 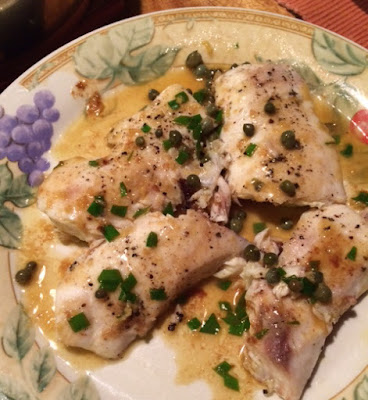 Season the fish generously on both sides with salt and pepper.  Allow to sit for 4 minutes.  Then dredge in flour.

Heat a large saucepan over high heat.  Add the olive oil and gently place the fillets in the pan.  When the oil begins to lightly smoke, turn the heat down to medium and saute the fillets on one side until they are golden brown, about 3 to 4 minutes, depending on the thickness of the fish.  Turn over and continue to cook on the other side until just cooked through and golden brown, another few minutes more.  Remove the fillets from the pan and set aside on a paper towels to drain before transferring to plate.

Pour off any excess oil from the pan and wipe with a paper towel.  Return the pan to medium high heat and add the butter, melting and simmering until butter begins to brown and takes on a nutty aromatic smell.  Remove pan from heat and carefully add the lemon juice, zest and capers, being careful as the liquid will react with the hot butter.  Stir together and add in the parsley or chives.  Spoon hot sauce over the fish and serve immediately.  I just added a green salad and my mixed rice for which I combine wild, brown and jasmine white. 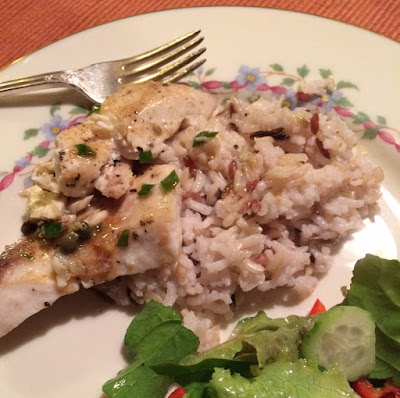 This will be served up for the Weekend Cooking event, hosted by Beth Fish Reads.  Jump aboard with your own food related post, or drop by for some good cooking and books.
Posted by Claudia at 10:42 AM 2 comments: 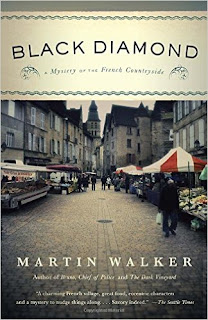 This latest novel, Black Diamond, (that I've read as yet) of Martin Walker's mystery series, "of the French Countryside", was another winner.  I really enjoyed all the information regarding truffles, that elusive and tempting fungi (especially for someone living in Hawaii).  His hero, Bruno, Chief of Police in a smallish town, also shares with me a delight in growing things for his kitchen.  Only a small village policeman would be able to keep chickens, a vegetable garden, truffle oaks, and go hunting with his friends.  He does all that, as well as butchering his catch, hanging up the herbs to dry and ham to cure, not to mention coaching rugby to the town kids and teaching tennis.  What a guy!

All of which add immensely to the plot, especially a particularly wonderful description of the wake dinner he prepares for a murdered friend, his truffle growing mentor and hunt club buddy.  The tradition is to fix food for a grand send-off, using meat that the friends have hunted together.  In this case, it was the venison, truffles and more.

Chief Bruno's venison casserole, with sausage, mushrooms, shallots, wine, etc. is brought to a simmer, herbs are added, and then the pot is nestled into a hay box, topped with a thick bed of hay and left for the remainder of the day.  A perfectly splendid, rustic slow cooker, I'd say.  I did mine in my Le Creuset.

He also prepares a soup with turnips, leeks and potatoes, stock, cream and herbs from the garden, all topped before serving with grated black diamond truffle.  For dessert he makes Crème brûlée, infused with black truffles.  There are full descriptions of all the preparations, mixed in with police action, conversations with other inspectors, a rugby game and his own musings on the crime's solution.

Roasted Sweet Potatoes with Garlic and Porcini for The Critic

This has to be the perfect book for mystery lovers and cold case fans, who are also interested in wines, the whole business from grapes to wine production, to tasting and beyond.  Quite fascinating background information is seamlessly merged with the action.  Peter May's The Critic has it all, as well as some good food mentions.

Of course, the overly-powerful (influence wise) wine critic gets murdered.  Not a "cozy" mystery here, more in the exciting thriller vein.  And, forensics expert, Enzo Macleod, from May's earlier debut novel in this series, Extraordinary People, gets to hunt the killer, as well as visit vineyards, and do a bit of wine tasting himself.  Thoughtful in parts too, about how people make assumptions, and draw conclusions based on misinterpretations, printed as fact in the newspapers and other media.  Similar to the present political divide, much of it stirred up by people with their own agendas, funding "protests" and paying the participants.  But I digress. On to the food! 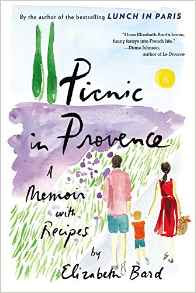 Just finished Picnic in Provence, another lovely food filled memoir by Elizabeth Bard, author of Lunch in Paris. Though I think I enjoyed her first book a bit more.  Still, lots of good recipes are included, as well as village characters, stories, and her insights on life in France.

Bard now has a young son, and together with her husband, Gwendal, they pick up stakes and move from Paris apartment living to a country house in the South of France.....Sigh.  I would do it in a heart beat.  Even through adjusting to new neighbors, new cultural traditions, a new business enterprise and attempting to get along with in-laws, she maintains a positive, can do attitude.  I don't think my own adjustment in a similar situation would be as good.  For one thing, Bard is a much more outgoing, social individual, which helps in making new friends.  I did wonder how much her mother-in-law would appreciate some of the honesty however.

My choice of recipe was based mostly on needing food to bring to a Christmas party.  I liked that she said of this dish, it's "the only thing I can think of that I'd want to eat before Thanksgiving dinner.  That said, it would also make a lovely salad served with dinner itself."  A winter salad, in reds and greens - perfect for a Christmas party.  She only dressed it with a bit of olive oil and some salt.  I did that, but for extra flavor, I decided to bring along a sesame tahini dressing, also from her book, with a few changes.  Though I didn't toss the salad with it, to keep from muddying  the colors.

Continue reading>>
Posted by Claudia at 7:25 AM 8 comments: