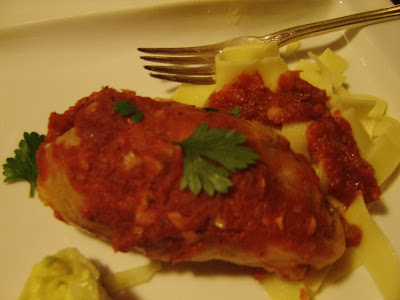 November’s Daring Cooks’ Challenge had us on a roll! Olga from http://www.effortnesslessly.blogspot.com/ challenged us to make stuffed cabbage rolls using her Ukrainian heritage to inspire us. Filled with meat, fish or vegetables, flexibility and creativity were the name of the game to get us rolling!

I haven't made these very often (can count the number of times on one hand) and really don't remember having them at home, growing up.  However, much of my childhood being in a repressed state of hardly any memory, that's not really a clue.  Stuffed Cabbage Rolls are quite delicious though, and should make a more regular appearance on our table. 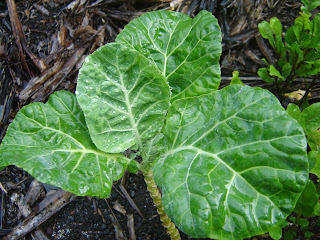 Since I have collards growing in my garden, a first attempt with the challenge was made with a few leaves from those fairly puny, smallish plants.  They're not getting enough sun right now.  Using a filling mixture of ground beef and bulger wheat, instead of rice.  Mainly just because I had a smidgen left to be used up.  I especially liked the very simple sauce I made, from Claudia Roden's, The Book of Jewish Food, which was easily made by blending up a can of tomatoes with sugar, lemon, salt and pepper. 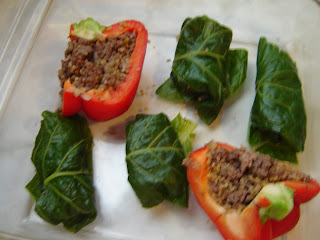 Since it was just the two of us, I split a red bell pepper half for the extra stuffing.   They baked for 2 hours, and I served them over egg noodles, with a small salad. 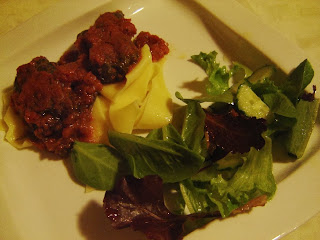 It's good to have another recipe for using collards, which when they're going strong produce lots of greens.  For my next trial I used regular cabbage, and a stuffing of half ground pork and half ground beef, with the partially cooked rice, recommended in our given recipe.

We were given very clear and easy to follow directions for each step, which I will include here:

Continue reading>>
Posted by Claudia at 1:00 AM 2 comments: