Hola! Heart of A Peach Palm 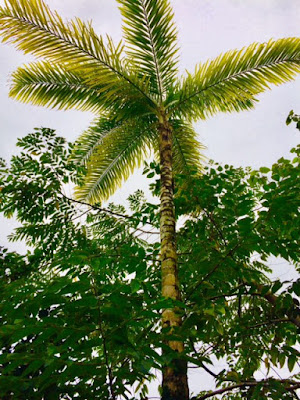 Sometimes when looking up recipe ideas, and following various trails on the internet, I lose track of what got the process started.  I believe in this case it was a mention of Costa Rican Ceviche Salad, utilizing heart of palm. But the most important thing mentioned on that recipe site (for me anyway) was that Peach Palms are clonal - i.e. clumping.  At that point a little light bulb flashed in my brain. I jumped up from the computer and ran downstairs, out to the garden, to inspect my Peach Palm. It had been planted a number of years ago with the idea of providing us heart of palm, as an alternative to cutting down a coconut palm for its heart, which is the growing tip at the very top of a palm, inside the bark.  Not that I would.  When one of my brothers was a tree trimmer, in his youth, he brought us some.  However, in the years following, always in the back of my mind, I had the idea that cutting the peach palm down for a salad would be wasteful, and then there would be no more. So it remained untouched. 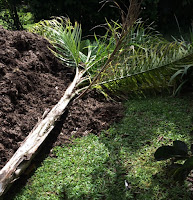 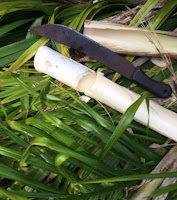 But, clonal means that the palm should be making little ones, known here in Hawaii as keikis.  Sure enough, that tall palm had a friend, right in back of it, which I hadn't noticed - so there were two tall ones.  And, at the base were new sprouts coming up, next to where a load of mulch had just been dumped. Oh boy, one of my happy dances ensued!  Right before chopping down a palm (yes, with some delegating). Now we can look at the palms as a sort of pantry, in which are now included various coconut palms here and there, which have sprouted from dropped coconuts, and were about to be uprooted and tossed.  Oh no!

Continue reading>>
Posted by Claudia at 8:56 AM 7 comments: 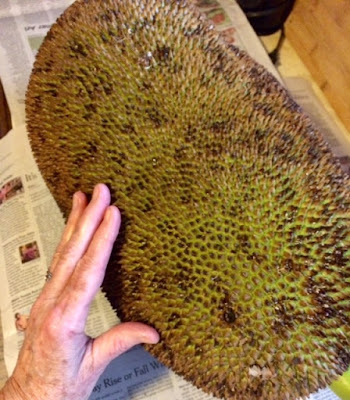 My first experience, face to face, with a jackfruit.  People grow them here, but you don't generally see them in the market.   Well, occasionally in the farmer's market, cut up and wrapped in saran.  This all started when I went to a local vegetarian restaurant with a friend, wanting to try the now almost cult fruit, prepared like pulled pork.  The owner said she didn't use jackfruit for that purpose, just ripe ones in smoothies.  So I managed to talk her into selling me a whole, unripe specimen.  Luckily she had just taken delivery on a bunch of them, so I was able to stagger out, with one of the staff helping me to carry it. This is a fruit you don't want falling on your head out in the orchard. 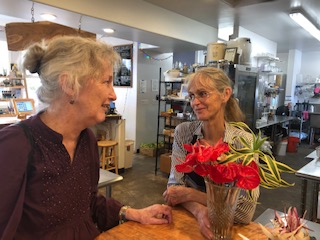 Me negotiating said purchase. The next job was researching how to cut it open, prepare for cooking and use in some recipes. Verizon has told me I'm down to 10% due to excessive data usage.

History and Some Wee Oatcakes for St. Pat's 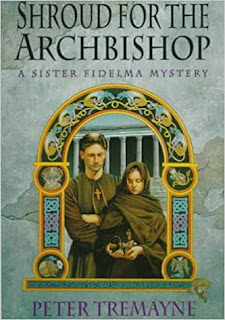 Call me nuts, but I'm thrilled when I come across a new book series (new to me anyway) that is absolutely terrific, full of fascinating history, great characters, a mystery to be solved, well written and even with some humor and romance.  Lots of wonderful books yet to be read. Well, watch me do a little happy dance!

I'm doing it now for Peter Tremayne a Celtic scholar who has written such a series - Mysteries of Ancient Ireland!  This one, Shroud for the Archbishop, featured today, is the second in said series. Absolution by Murder being the first. They're also called the Sister Fidelma Mysteries.  She is the protagonist, an Irish advocate and judge who is called upon to investigate a tricky and politically sensitive murder, while on an assignment in Rome.  Here's what the Publishers have on this one:

"Wighard, Archbishop designate of Canterbury, has been found dead, garrotted in his chambers in Rome's Lateran Palace in the autumn of A.D. 664. His murderer seems apparent to all, since an Irish religieux was arrested by the palace guards as he fled Wighard's chamber, but the monk denies responsibility for the crime, and the treasures missing from Wighard's chambers are nowhere to be found.

The bishop in charge of affairs at the Lateran Palace suspects a political motive and is wary of charging someone without independent evidence. So he asks Sister Fidelma of the Celtic Church to look into Wighard's death. Fidelma (an advocate of the Brehon Court), working with Brother Eadulf of the Roman Church, quickly finds herself with very few clues, too many motives, a trail strewn with bodies--and very little time before the killer strikes again." 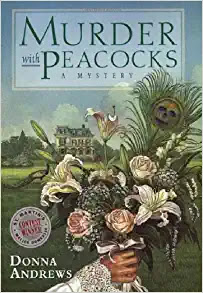 Define co-dependence?  Okay, Wikipedia says "Codependency is a behavioral condition in a relationship where one person enables another person's addiction, poor mental health, immaturity, irresponsibility, or under-achievement. Among the core characteristics of codependency is an excessive reliance on other people for approval and a sense of identity."

You can also see this phenomenon  in action, if you haven't already encountered it in life.  Just read Murder with Peacocks, by Donna Andrews.  This is her first novel, and I'm hoping she will tame the tendency in Meg, her protagonist, by the next one.  Because I will be reading at least one more of her works.  There was enough humor, laugh out loud type, good character development with some truly outrageous relatives, and hilarious situations to keep me reading, despite frequently wanting to take Meg by the shoulders and give her a good shake, yelling "Are you Serious??"

She has taken on wedding planning, Maid of Honor duties for three summer weddings, her mother's, brother's, and best friend's. None of whom are being at all helpful, far from it in fact.  Besides which, she is not a wedding planner.   Two of the couples she doesn't even want to see married, at least not to the horrid people they've picked.  So there you have it - Co-Dependency with murder.