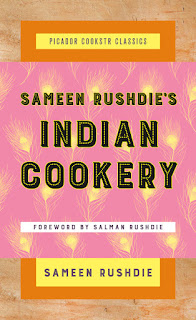 Being a long time fancier of Indian food, I was happy to order, and receive so quickly, Indian Cookery by Sameen Rushdie, recommended by Beth Fish over at her site, Beth Fish Reads.   Her brother, Salman, who seems to have loved his task as official taste tester for his sister's book, certainly has a way with words, and as it turns out, Sameen is also an excellent writer. I enjoyed her comments and many interesting reminiscences on food, her past, the culture, and her mother's cooking.

In the book, regarding chicken:  "'My children only eat chicken,' my father would remark sarcastically to emphasize just how thoroughly spoilt he thought we were.  In the subcontinent chicken is the most expensive meat available, and has become synonymous with good living, hospitality and privilege."  She found things to be much different upon moving to England, and remarks: "Personally I was very pleased to find chickens put in their place in the West.  It is true that I have always been fond of chicken, but the pomp and snobbery surrounding it in the subcontinent did make it a little hard to swallow." 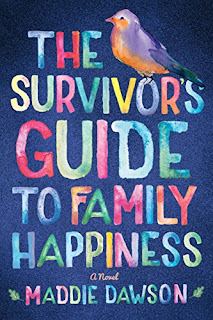 An absorbing novel on surviving family life after the death of one's mother, finding one's birth mother and birth sister, wanting to have a real family, dealing with rejection, managing the teenagers of one's boyfriend, and much more, The Survivor's Guide to Family Happiness, by Maddie Dawson.  Terrific stuff, with tongue in cheek good humor.

Of course, it's probably easier to manage teens if they're not related to you.  Must be why she did such a good job in that corner at least.  I loved the story, back story and development of all the characters.   Here's a quote, from when Nina is on her way to the re-cycling place after her mother's death.

"And then I went outside and got into my Honda Civic that held the portable commode and the IV pole and the shower chair, all of which I'd spent an hour wrestling into the backseat before leaving the house, and I jerked the car into reverse, pressed on the accelerator - and immediately got my tires stuck in the pile of snow by the curb.
I did everything you're supposed to do - cursed, banged my hand on the steering wheel as hard as I could, and then, when that didn't work, I rocked the car back and forth, pressing on the gas, then turning the wheel - but it got progressively worse with every attempt.  The tires kept burying themselves deeper and deeper in, and what had been snow under the tires was now turning to slick ice. There was a squealing noise, and after a while, the smell of something burning.
I mashed on the accelerator so hard that the car lurched forward, and the commode in the backseat took the opportunity to jump into the front seat and pin me down with its aluminium legs.
Sometimes when you're moving from the old to the new, the universe likes to remind you who's in charge by spinning your tires on ice and then throwing a toilet at your head.
At least that's the lesson I took away from it."

Continue reading>>
Posted by Claudia at 11:55 AM 6 comments: 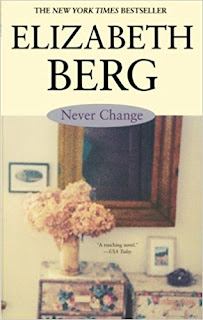 I've read and enjoyed several of Elizabeth Berg's novels, and this book is definitely one of her best.  Never Change - is a winner, with totally engaging, if occasionally frustrating characters (as in real life) who finally face their need for change in a sometimes sad, lovely, and inspiring story.
From Publisher's Weekly:

Myra Lipinski has been lonely all her life; she trained as a nurse "because I knew it would be a way for people to love me." Now 51, she lives alone with her dog and works as a visiting nurse in Boston, caring for an array of eccentrics that includes the feuding Schwartz couple, the feisty DeWitt Washington and the anxious teenage mother Grace.

Resigned to spinsterhood, Myra is secretly thrilled when her agency assigns her to care for a former crush, Chip Reardon, who has returned to his parents' home with end-stage brain cancer. In high school, Chip was a golden boy, athletic and clever, out of ugly duckling Myra's league. Now, though, he and Myra strike up a friendship based on their mutual loneliness and on Chip's resistance to his parents, who want him to pursue aggressive treatment for his cancer. Chip prefers to die peacefully, a decision that only Myra seems to understand.