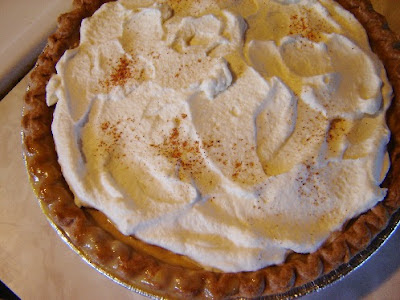 We do have a Hana here in Hawaii, on the island of Maui, however this is a Carabbean Hana, as in the rum, used in this pie for flavor.  Don't worry you tee totallers, it's cooked out.  Totally.  Trust me.

The trick with my version of Banana Cream Pie is actually not the rum, but lies in caramelizing the bananas first in butter and palm sugar.  Then you set that aside and make the custard, into which you stir all those lovely bananas.  The cream is in the custard and extra goes on top.  Yum.

Continue reading>>
Posted by Claudia at 11:49 AM 3 comments: 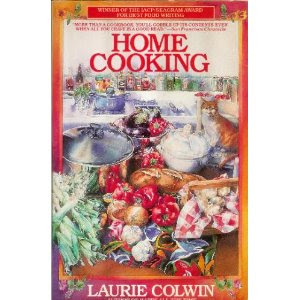 Spanish Paella with the Daring Cooks 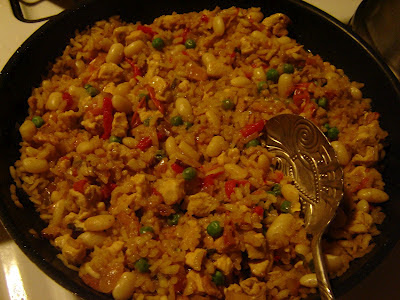 Do you know, Paella is one of those dishes that has been on my cooking "bucket list" for a long time.  And, I finally got the kick in the pants that was needed to go ahead with the program..

Our Daring Cooks’ September 2012 hostess was Inma of la Galletika. Inma brought us a taste of Spain and challenged us to make our very own delicious Paella!

Being as Bob does not care for shellfish, a typical Paella was not on the menu, neither was I into doing a strictly vegetarian version. So I went out into the wilds of the interweb and did a bit of Spanish Paella researching.  It seems the original Valencian recipes didn't have fish, but did include rabbit, snails and beans. Ooookay, snails are plentiful here but again, Bob won't touch them, and doesn't much like rabbit either.  Beans are good, and some folks say rabbit tastes like chicken, so we are submitting a version of our own.  Based on what is available that Bob will eat.  Don't worry folks, I eat out often enough to get in my quota of all that other good stuff. 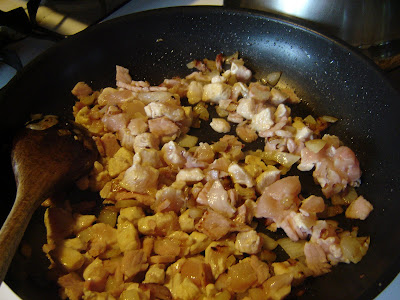 Paella is a bit like Risotto, except that the liquid is added all at once.  The rice is, ideally Calasparra or Bomba, similar to Arborio.  You want a nice starchy variety and Arborio, which I used, works fine.  Also it is briefly sauteed in olive oil first, as you would for a risotto.  I caramelized some onion, added lots of garlic, the diced chicken and ham, then the rice, before adding tomatoes, veggies and finally stock and herbs.  That, in brief, is the procedure.

Continue reading>>
Posted by Claudia at 2:41 AM 4 comments: