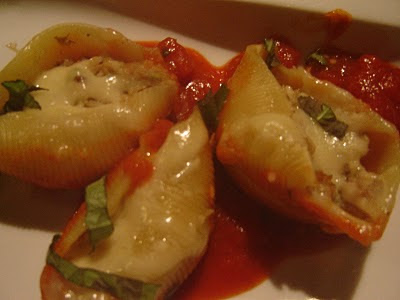 I seem to be on some kind of tuna bender, featuring it both fresh and tinned, a lot it seems. But,  I couldn't resist this one after seeing various tempting versions of stuffed shells online.  I just had to go out and buy a box.  They are large, easy to fill and look so fabulous served sitting in a splash of marinara.  Just perfect.

If you have left-over ahi tuna or just want to open a can, this couldn't be simpler.  While your pasta water is coming to a boil, mix up the stuffing.  You can make your tomato sauce, use one you've frozen or open a jar of some good brand.  Bring it to a simmer.

Continue reading>>
Posted by Claudia at 10:26 AM 9 comments: 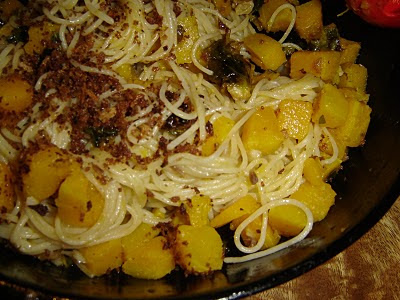 Is it just me?  Am I the only one who has noticed Michael Symon's Fried Brussels Sprouts with Walnuts and Capers?  Deep fried.  And, the fact that he says to "remove the contents of the pot with a skimmer and place directly into the bowl of dressing.  Toss to coat."  Dressing which contains another 1/2 cup of olive oil.  Foolishly, I followed directions.  Sort of.  I did hold the skimmer over some paper towels for a second or two.  Still I want to tell you, that was some oily sprouts.  The flavors were extremely tasty, but it was hard to get past all the liquid fat.  Of course, my grandson's reaction was "Oh fried food!"  A fairly uncommon occurrence around here.  Aside from a few foodie events lately.

I served it as a side with Shepherd's Pie on St. Paddy's.  And almost threw out the remnants afterwords.  There weren't a lot, but being a frugal sort, I tossed them instead with a pile of pumpkin and pasta, which turned out to be a fabulous move. 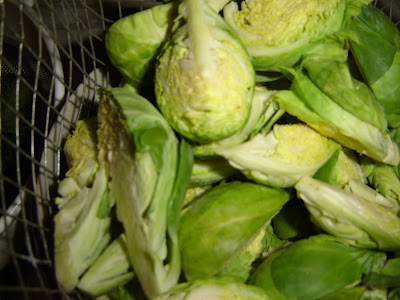 So you may want to cook enough for a side dish, plus extra to make this wonderful concoction on angel hair the following day.  Be sure to drain the Brussels sprouts properly on paper towels after frying though.  Pasta can take some oil in its stride, but it can be added later.  I love angel hair in this, as it allows all the brilliant flavors to shine through.  The sweet, tender Kabocha or butternut squash is a fabulous contrast in flavor, color and texture, and when cut into 1/2 inch chunks, can be cooked with the pasta in the same amount of time.  It then absorbs the Dressing flavors when stirred together.  Easy peasy.

Continue reading>>
Posted by Claudia at 8:16 AM 5 comments: 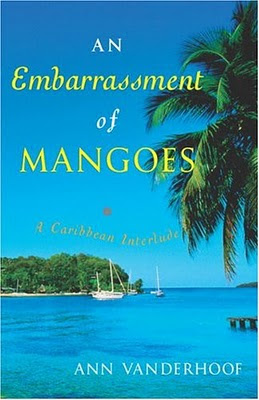 We're off on another vicarious adventure at Cook the Books Club, this time in the Caribbean with voyager and writer, Ann Vanderhoof, author of An Embarrassment of Mangoes, (Doubleday Canada, 2003), which means a whole lot of them. Adventures as well as fruit. What an inspiring, envy provoking, and darn good read!


She and her husband had a dream - to cast off for a year or two from jobs, cold weather, the stress of city living, and sail South to the islands of the Caribbean. They saved their money over a period of several years, acquired a near perfect yacht and made the plunge. This book is Vanderhoof's log of events, characters met and wonderful meals - which she kindly shares with her readers.

I did go through a phase, with Bob, wherein we saw ourselves sailing off into the sunset, living on our own little home away from home at sea. We purchased a small boat (23 ft.) to learn sailing. Round and about in Kaneohe Bay was fun for awhile. Then, life interfered with our tentative plans. Like a newborn daughter, below decks in the cabin, squalling her sweet head off; Bob's ever present fear we were about to rack up the investment onto a nearby coral reef; and of course, the not so small matter of money. Truthfully,  I did wonder about encountering pirates and whales (too close). Possibly just not determined or brave enough.  Anyway, that's what arm chairs are for, right?

One of the nice things about our blogger club is that you usually get an excellent read as well as some wonderful recipes, and this selection is no exception. I wanted to cook up everything Ann mentioned eating. However, given the opportunity to eat lobster, guess what?? Yes, I'll take lobster. And curried, oh boy! I really had to try Dingi's recipe, which Ann gives us on page127. When I've eaten lobster in the past it has always been with butter and lemon. Standard fare. Time to rock the boat.

This guy is saying, "Please do something special with me."

Luckily, my brother-in-law's brother is a fisherman.  I mentioned wanting to cook some lobster, and a few days later he had a nice one for us. Then, with a freshly picked green breadfruit, I made up a Potato Breadfruit Salad, which along with rice for the curry to nestle up next to, and a bit of Guava Chutney, our meal was set. True island style ingredients, with a tang of the Caribbean.

Brining My Brisket for Charcutepalooza 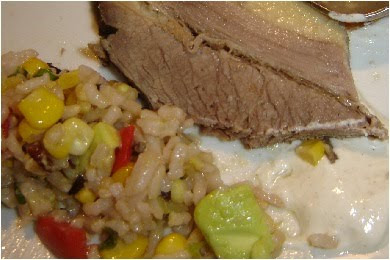 Brining is the Charcutepulooza challenge for March.  I have prepared food in a salt brine a few times, so I was looking at this as opportunity for improving technique and trying new recipes to use with it. Pickles are a favorite. Especially of mixed vegetables. I did brined Chicken, and Corned Beef last year, both using Ruhlman's Ratio book and his web directions as well, but didn't post about it, other than to complain over all the room the brisket took up in my fridge. And, the fact that it was late for St. Paddy's. This year will be different. 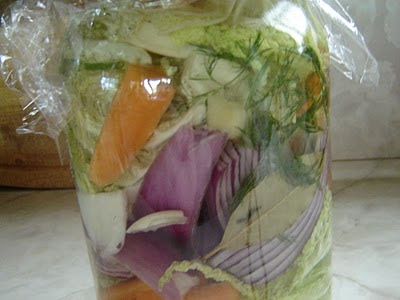 I decided make more of those pickles, since I was out, and the Beef Brisket for Corned Beef, in time for St. Patrick's.

Continue reading>>
Posted by Claudia at 7:30 AM 3 comments:

This was fun. Almost as good as going to Peru. Almost I said. Nothing can actually beat a first hand experience.

I did not prepare both the required items for the same meal. We were having a heat wave when I put the Ceviche together and wanted to keep dinner simple. I served it with corn on the cob and re fried black beans, topped with cheese.

The Ceviche was terrific, piquant and refreshing, close to a popular dish in the Hawaiian Islands called poke, which usually has some type of seaweed added in, and is more on the raw side, but very similar. I have decided this Peruvian version would be the winner in a poke contest, (if I were judging).  We do have a number of those competitions here.

Several days later it was Papas Rellenos time. A more involved dish, again with the deep frying.  You may or may not remember, we fried last month making Tempura at the Daring Kitchen.  Some of us aren't used to all that oil, but we press on in the interest of furthering our foodie educations.  And because it just tastes so darn good. 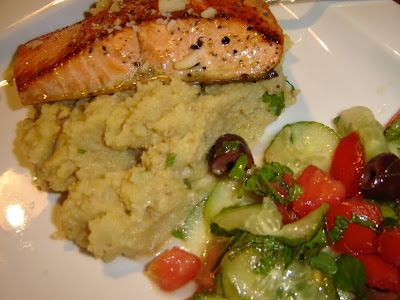 The Skordalia started out to be Hummus.  But, somewhere between the internet and Michael Symon, it morphed into a potato, garlic, lemon and chickpea thing, with the catchy name, Skordalia.  I love the sound of that.  Like some sort of Greek flower.  Mr. Symon says that there are two types of skordalia sauces in Greece.  One made with potatoes and garlic and the other with day-old breadcrumbs, almonds and garlic.  He likes the second, and folds in chickpeas to give it texture.  Well, for some strange reason (maybe because of what I had available) the first option sounded like just the thing.  Keeping to the beans added in.  Traditionally, this is served with fried fish, and since I had salmon planned, I said to myself, perfecto! 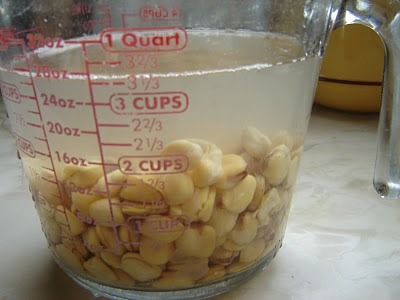 These beans after soaking overnight for hummus, and with a slight change in plan, were destined to become something new and different.  Something wonderful.  The garbanzos (ceci or chickpeas) cook for an hour or so - til tender.  Note that a cup of dry swells to almost 2 cups, then when cooked, to a wee bit over 2 cups. 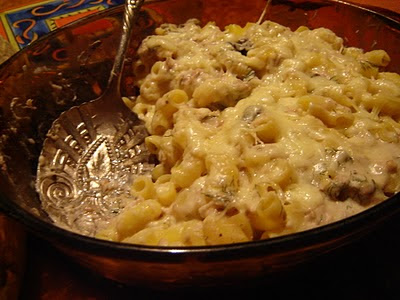 No, that is not an oxymoron, another Mac 'n Cheese variation, yes.  They are never ending, but luckily always in favor.  At least in our house.  This one requires that you open a can of tuna.  Something most of us have as a pantry staple, things handy for a quick dinner.  Also some black olives, which should be another staple.

It is gourmet because of the black olives, fresh dill, the slivers of preserved salted lemon and the good cheeses in there.  Also, because it is made from scratch.  Well, except for the tuna. 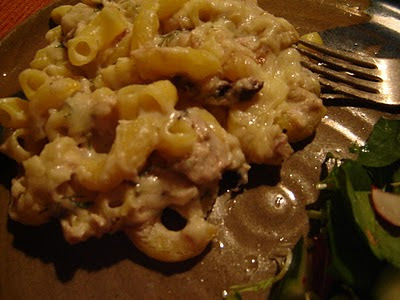 I am trying hard to remember what all did go into this.  Funny how you can be cooking and just neglect to write things down.  At least some pictures got taken.  All is not lost. Tuna water was added to the Bechamel, which always makes sense to me.  That is a type of fish stock, right?

Someone better at French may have to correct that title translation. This dish began with an urge to make a panade, with a loaf of day-old (truthfully more) bread, and wanting at the same time to use up that hamburger in the fridge. Then, the idea came, as ideas will - Sloppy Joe meet Mr. Panade. After all, a Sloppy Joe is a spicy, meaty, saucy concoction mushed between layers of soft bread. A match made in heaven.

Usually, aside from the bread, a panade is composed of spinach or chard and caramelized onions. This breaks new ground. Besides which it was delightfully Sloppy Joe like and really good. Yippie cai aie!

Continue reading>>
Posted by Claudia at 8:10 AM 10 comments: