Hippie Food and Me 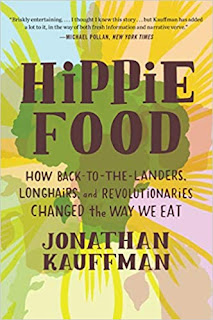 Our current selection from Cook the Books Club, is being hosted by fellow Hawaiian, Deb of Kahakai Kitchen. Much of this well researched tome, Hippie Food by Jonathan Kauffman, echos my own history.  I lived this darn book, some of it anyway.  Caught up in the world directly around us as we were, much of what Kauffman recorded was part of the "Mainland" story or only hearsay.  We were hippies, Bob and I, of a sort, back-to-the-landers (if you can go back to where you never were in the first place) in rural Hawaii.  Building a basic, simple home, planting trees, a garden and etc. However, we were under no illusions about supporting ourselves solely by farming, and had no inclination to live off the State.  So, day jobs. Me with commercial art and raising our daughter.  Bob in Real Estate.  Also, coming to know Jesus was a large factor in our staying together and staying sane through it all.  Plus, setting aside some unhealthy drugs was a big help with that too.

As far as food goes, Kauffman focuses mainly on the vegetarian aspect of "hippie food", which I don't think really merited all that emphasis.  We had a very short period of interest in vegetarianism while backpacking in Southeast Asia, China and Japan, before acquiring our parcel of land in Hawaii.  So would agree with what he said (page 198) about the counterculture taking up "the idea of eating as a political act and converted millions of people to vegetarianism, at least for a year or two."  But, helping at our food c-op, making home cooked meals, granola, and bread, cutting out processed foods, and trying to stay with organically raised produce, was definitely a priority for us then and remains so. I have researched the subject, and would encourage everyone to do that.  Find out for yourself why eating organically raised, less processed food is so important.

Making Chocolate From Beans to Bars 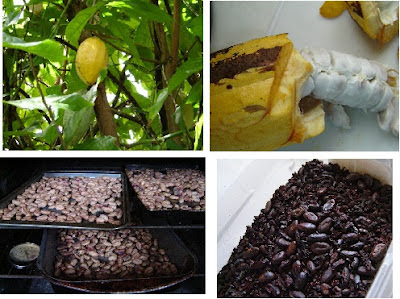 Continuing on with the goal of making more from and using what we have!  I made a large batch of chocolate from our cacao this past week.  Of course, if you start the timing from picking the fruit, and cutting open, then letting it ferment a week in a big pot, next drying on trays for about a week, then roasting, husking and grinding, the time can be spread out quite a bit. For more in depth instructions, see the Chocolate Alchemist's video series.

I usually let the beans sit in containers after the initial drying stage.  They keep quite well and we can let them accumulate until there's enough to make a chocolate production worthwhile, instead of (as per usual) just using the ground, roasted nibs for my cocoa drink in the morning.  As you might notice, our cacao tree, below, has no fruit at the moment.  Though we have a few other trees, they're not yet producing.  More on the process here, from an earlier post.

Continue reading>>
Posted by Claudia at 10:23 AM 7 comments:

Tapioca - Not Pudding, but Fritters and Pizza! 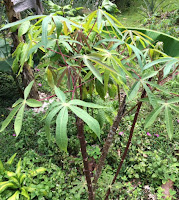 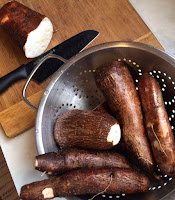 Going along with the concept of less shopping and more eating what we have, I've recently been posting on and using various staples from our tropical garden, a living, growing pantry.  Thus we showcase Tapioca here, AKA manioc, yucca, cassava, pia, (Hawaiian) or ubi kayu (Malay).  So many names for this very useful plant because it's in use all over the world.  Well, the warmer, zones at any rate. It's a pretty garden plant, and when you think it might be ready, dig it up and use the root.