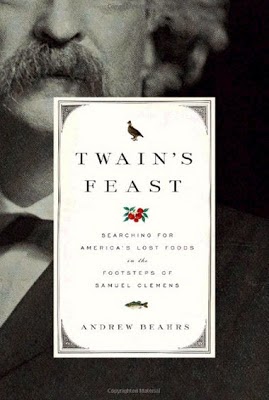 For our bimonthly Cook the Books Club, the current selection was Twain's Feast by Andrew Beahrs, a meandering digression on the travels and favorite American foods of Samuel Clemens, then, and what has become of them now.

Really, a meandering lament (say Jeremiah was a contemporary cook) for the lost, or nearly extinct native species, both plant and animal.  Those beloved by Twain, from the now protected prairie hens of Illinois to oysters and mussels once fabulously prolific
on the California coast.  The damming of the muddy Mississippi and etc. etc.  Possibly preaching to the saved here, but lots of fascinating information.  I especially enjoyed all the material on possum and raccoon preparation.

Though tempted to do something from the New Orleans section, as I do love Creole and Cajun dishes,  I thought it would be fun to take a digression, way westward instead, and celebrate Mark Twain's time in Hawaii, since Beahrs did not cover that influential, yet relatively brief period in the author's life.  I found the following story interesting enough to quote most of it, thinking you might enjoy the background information as I did. From a 2010 article for Huff Post Books, by Kate Kelly, entitled Mark Twain and Hawaii: Long Before it was the 50th State:

"Since last spring the literary world has been abuzz about the November 2010 release of the first volume of Mark Twain's autobiography. Twain had left the manuscript with specifications that it not be published until one hundred years after his death, by which time he would be "dead, unaware, and indifferent."

In the 1860s, a young Samuel Clemens, who had only recently adopted the pen name of Mark Twain, was one of the first reporters to be sent from the mainland of the United States to the Hawaiian islands. He was on assignment for the Sacramento Union to provide their readers with information about what these fabled islands were really like.

Twain spent almost four months in Hawaii, eventually producing for the Sacramento Union 25 letters about the Sandwich Islands, as he called them. His letters were a huge hit at the time, and the merit of his work lives on. One Hawaiian native, Lawrence Downes, writing recently about Hawaii for the New York Times (5-14-06) notes that Twain provides the "best travel writing about Hawaii...that I have ever read."

During his visit, Twain traveled to the summit of Kilauea, hiked Diamond Head, and made his way through the valleys of the islands. He also surfed, testing out the sport that locals loved even then.
Samuel Clemens longed to return to the Sandwich Islands and spent many years wondering how and if he could go back. In a later work, Twain writes of Hawaii: 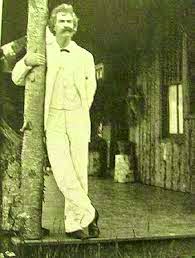 "For me its balmy airs are always blowing, its summer seas flashing in the sun; the pulsing of its surf is in my ear; I can see its garlanded crags, its leaping cascades, its plumy palms drowsing by the shore, its remote summits floating like islands above the cloud-rack; I can feel the spirit of its woody solitudes, I hear the plashing of the brooks; in my nostrils still lives the breath of flowers that perished twenty years ago."
But that first trip became a pivotal point for Samuel Clemens, and he was never able to return for a stay. His stories were so popular that his fame began to grow, and he found himself in great demand.
Writes Twain: "I returned to California to find myself about the best-known honest man on the Pacific coast. Thomas McGuire [Maguire], proprietor of several theaters, said that now was the time to make my fortune -- strike while the iron was hot -- break into the lecture field!"


Around 1860 a number of the Chinese who had left the plantations began to open small businesses in an area of Honolulu known as Chinatown. These businesses were mostly small shops specializing in specific trades such as grocers, jewelers, bakers and tailors, as well as the restaurant trade. 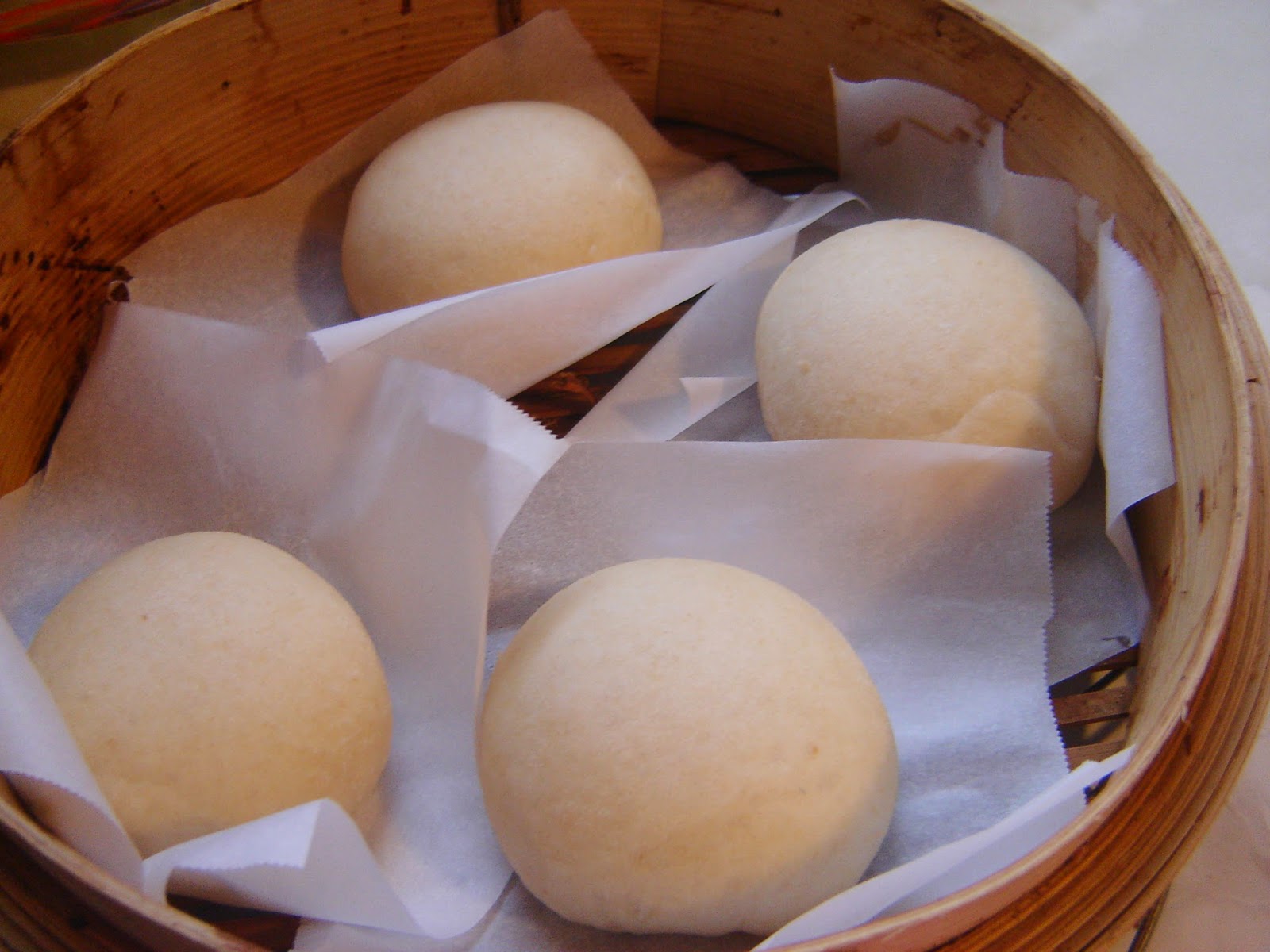 Which brings me to my point - that Sam Clemens would most likely have visited Chinatown during his stay in Honolulu, as he was there in 1866.  Chinese food had became wildly popular by that time, with both foreigners and the local Hawaiians, especially dim sum, the varied and delicious appetizers. One variety of which remains a local favorite - Manapua, the Hawaiian word for Char Sui Bao, tasty little buns with a filling of pork char sui. 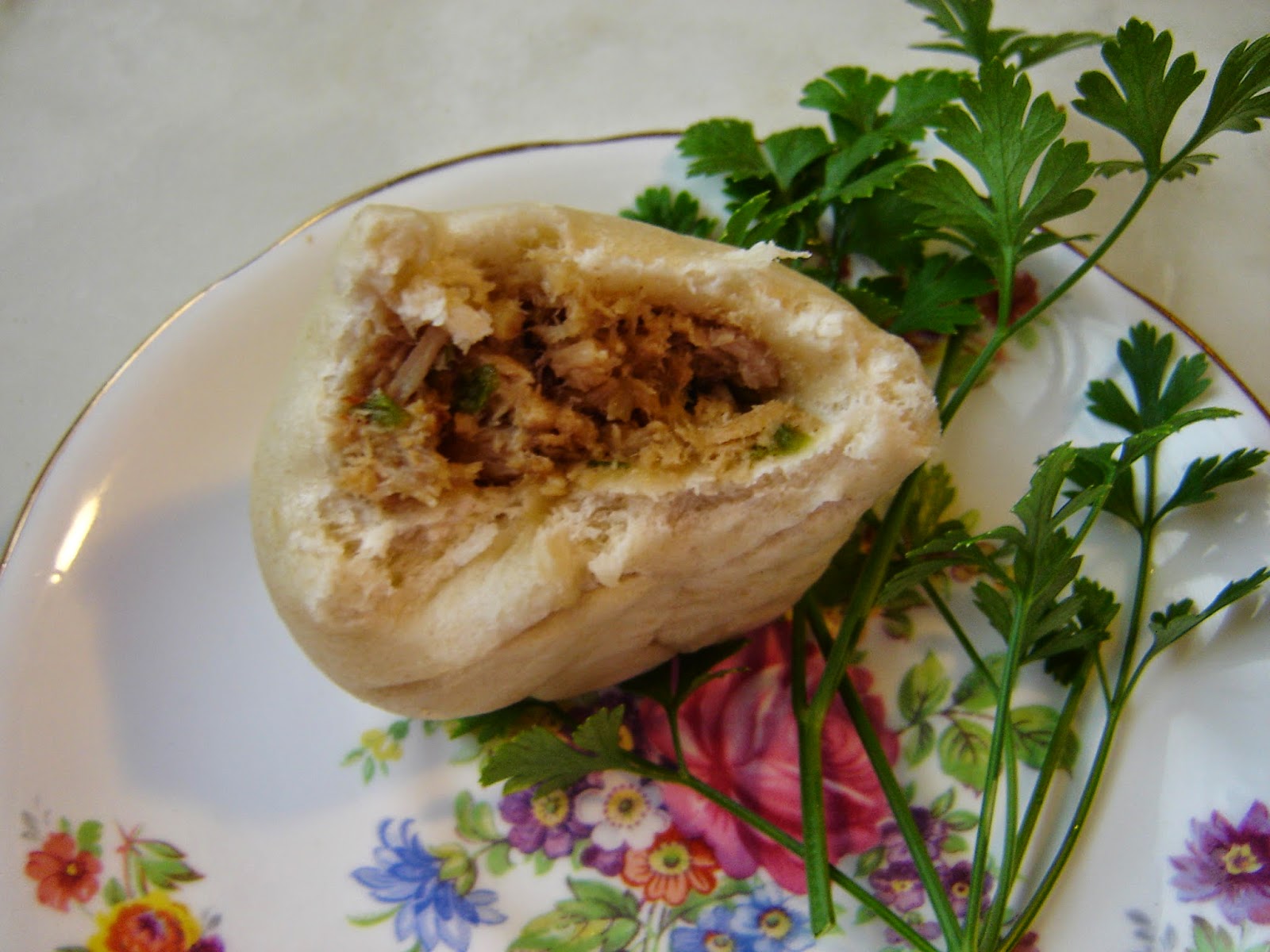 Several years ago I made them for the first time, stating then that I didn't know of anywhere on the Big Island to get any (wanting organic, sustainably raised pork made it a bit difficult of course).  For the recipe see my earlier post.   However, this time I wanted to use my sourdough starter, more likely what the early manapua makers of Chinatown would have used. 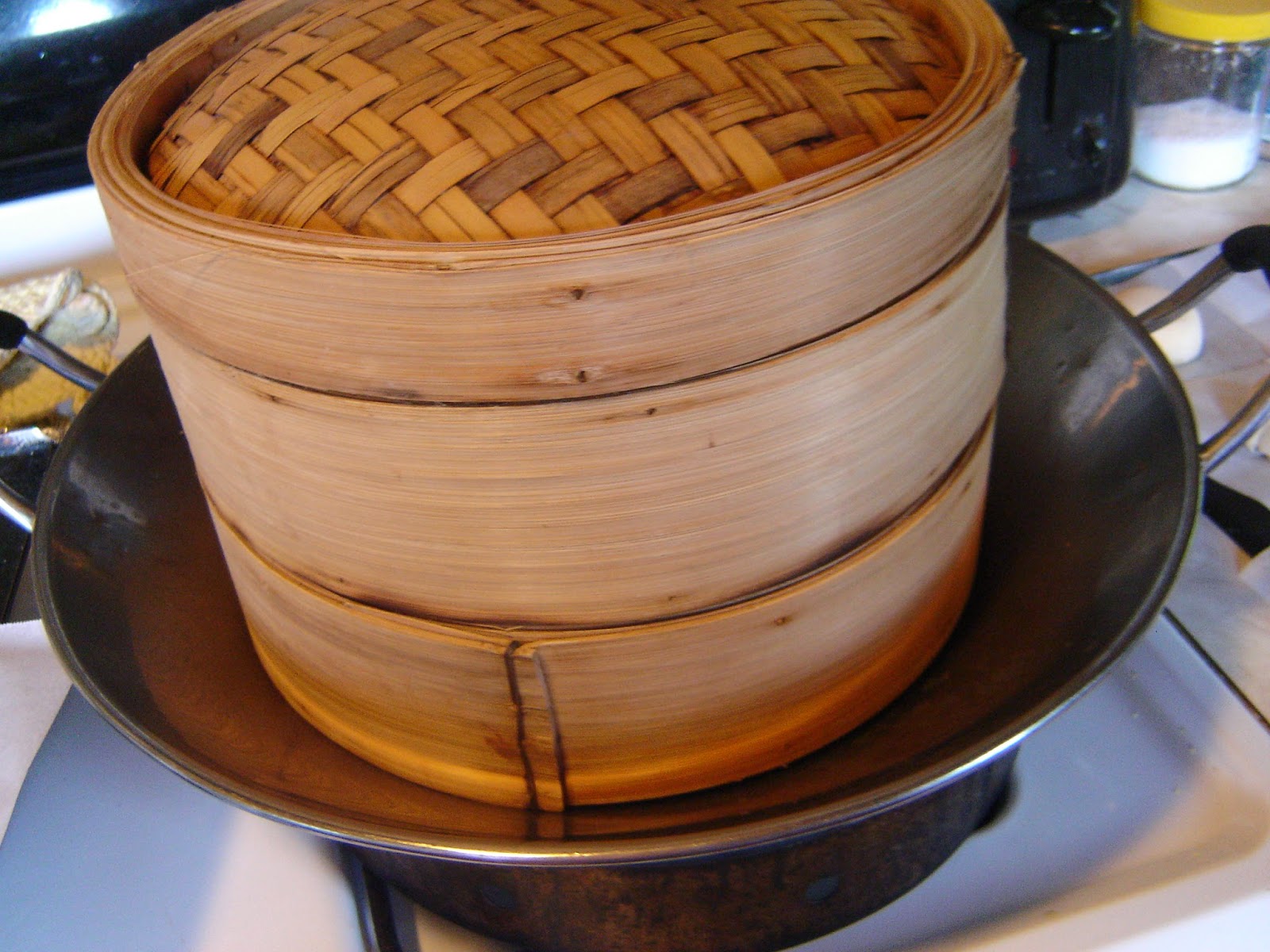 A delicious treat, and surprisingly easy to put together.  If you slow roast some pork, you might add  Chinese seasonings to your left-overs, and have the filling without any trouble.  The dough is a cinch to work with, and they can be baked or steamed in a bamboo steamer over a wok, as I did.

Visit the Cook the Books Club page to check out what everyone came up with later in the week, and to see what books are lined up for the coming months if you would like to participate.
Posted by Claudia at 2:20 PM 8 comments: 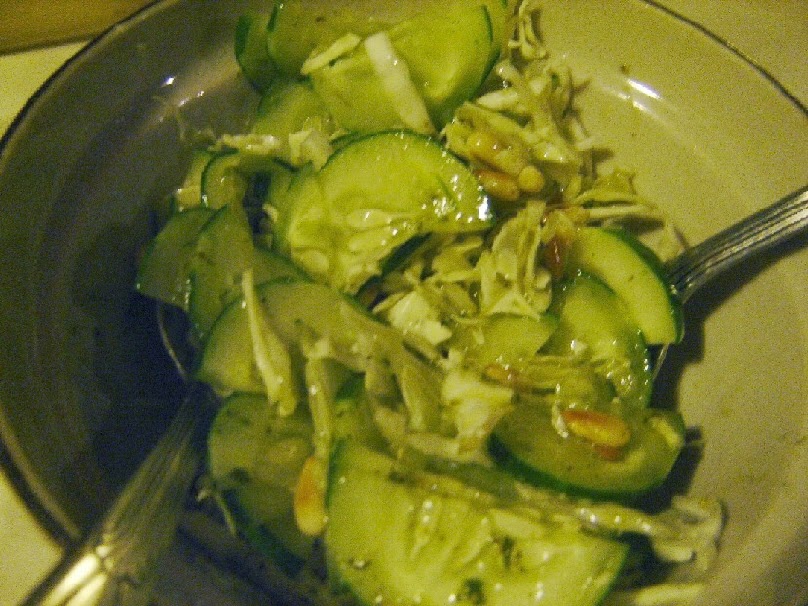 For March’s Daring Cooks’ Challenge, Ruth, Shelley and Sawsan asked us to totally veg out! We made salads and dressings, letting the sky be the limit as we created new flavors and combinations that reflect our own unique tastes.

Of course, for those of us who usually make our own dressings this was not really a challenge.  So, in order to make it one, I decided to do something that was.  Make my own oil for the vinaigrette! 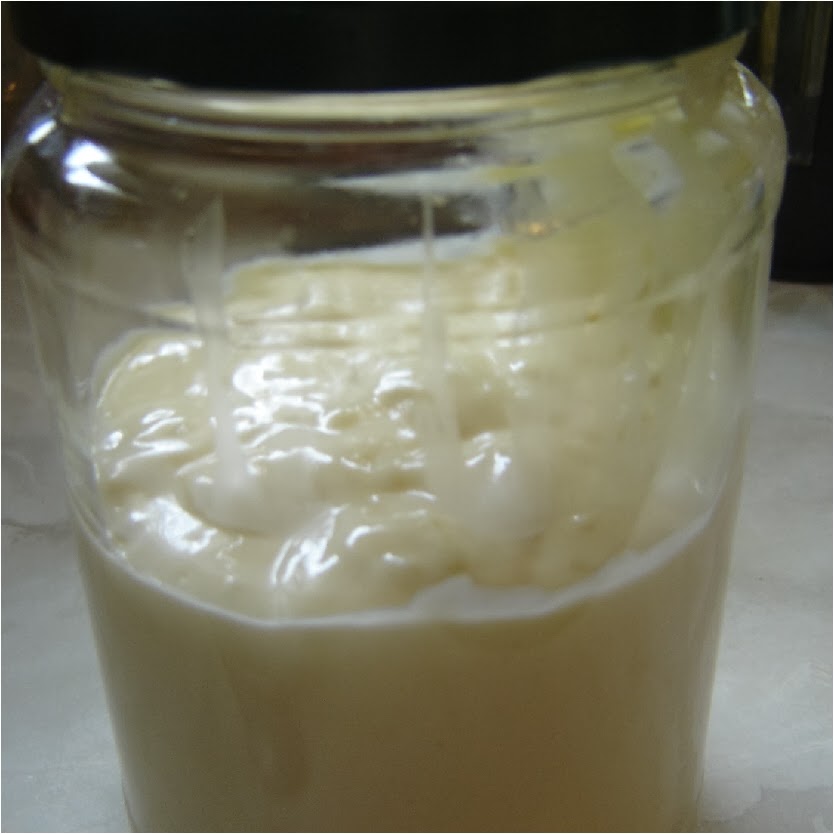 Or have someone else do it.  The project and the coconuts have been waiting, but then a friend interfered with that idea and gave us a big jar of his own macadamia nut oil.  He has an oil expeller, and also has a large grove of coconut palms, and makes coconut oil.  An amazing dude, who actually runs his car on that oil.  I thought the mac nut oil would be lovely in dressings and an aioli, which I made immediately.
Continue reading>>
Posted by Claudia at 1:00 AM 3 comments: