Ups and Downs of Where I Come From 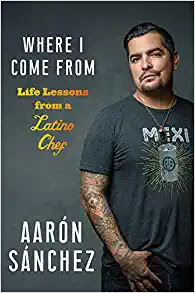 Our Cook the Books Club selection for February/March is Where I Come From, Life Lessons from a Latino Chef, by Aaron Sanchez.  This round hosted by myself, and it has to be said, I was inspired right from the start.  On the first page of his Introduction, Sanchez states: "There is nothing about the food of Mexico that is dull or muted  - Cinnamon. Chocolate. Chile  Earth.."

I had plans for some left-over roast chicken, Chicken Enchiladas, which I usually top with a decent brand of canned green chili enchilada sauce.  Horrors!  But slightly doctored up, when I'm not in a hurry.  In this instance I thought, yes, I have the chocolate, which we actually grow and process, I have the cinnamon, ditto, and the chilies are in the sauce. Viola!  We'll go with that thought.  I first pounded some roasted, ground cacao in my big, trusty mortar, with a bit of cinnamon, added some cumin and sautéed the spices for a few minutes in earth.  No, ha ha, bacon fat.  Stirred in minced onion and then garlic, after that I added it all to the sauce, which was now taking on the color of muted chocolate.  But, nothing dull or muted about the taste!! Transformed by those iconic spices of Mexico.