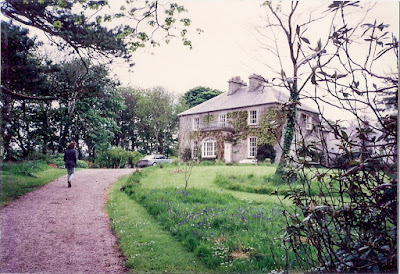 It was that time again - to break out the green, the shillelagh and of course, your own fabulous home-cured corned beef.  However, I decided to head this up with a picture of me in Ireland (a number of years ago), a tad prettier view than pics of a slab of beef brisket in brine. This recipe fits in well with our latest Cook the Books Club selection, The Unprejudiced Palate, or as Alice Waters dubbed it, the Prejudiced Palate, by Angelo Pellegrini. 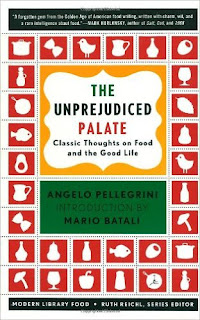 Pellegrini was certainly sure of what he believed, though he crossed over the line a number of times, and especially in his encounter with M.F.K. Fisher in a final addendum.  Yes, there is a tremendous amount of waste in this country; yes, many people are dependent upon fast foods, more so now than when this book was written, and yes there is too much reliance on prepared foods, canned, frozen or boxed.

Also, he mentions parts of meat usually neglected by home cooks, though I have to say, that may now be for good reason - you cannot find those parts in most grocery stores any more.  Until recently a whole chicken came with the giblets and neck enclosed, which practice seems to have stopped. Unless you butcher the animal yourself, it is not likely you will be able to cook kidneys, heart, tongue, brains etc.  In fact, I was going to make his veal suggestion from page 203-4, but was unable to find even veal in the market here.  Despite the fact that Hawaii Island has one of the biggest cattle ranches in the U.S.

The memoir sections, from his young life in Italy and early years in America were very moving, especially the evocative cultural and economic contrasts.  I had no idea of the extreme poverty in rural Italy at that time.   He was so overwhelmed by the contrast in America, that I think it just broke his heart to see waste and carelessness with the precious gifts of abundance here.

As a winemaker myself, though not grape, unfortunately, I enjoyed his thoughts on that subject also.  Much of the remainder seemed a bit obvious, perhaps due to when it was written, or preaching to the saved, in the case of our group of bloggers anyway, and I found myself skipping sections.  Always addressing or referring to "housewives" in the book was annoying, though another sign of that era, I'm sure. 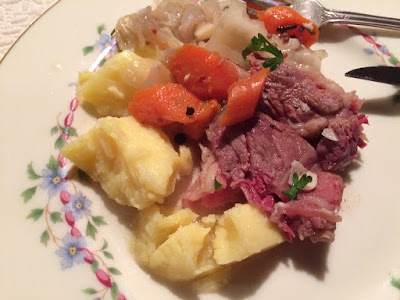 Corning your beef brisket from scratch would be right up his frugal little alley.  Using an inexpensive (supposedly) cut of meat, slow cooking after a long soak in spiced brine, is not at all difficult, just requires a bit of planning ahead.  5 days to be exact.  You throw all the spices and salt together with water and add your meat, easy.  Leave it to cure and then cook.

Continue reading>>
Posted by Claudia at 7:57 AM 12 comments: 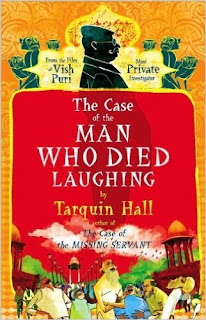 I am really enjoying this series, set in India, by Tarquin Hall.  His very original private investigator, Vish Puri is reminiscent of no one else.  Perhaps just a bit of Hercule Poirot with his mustache, Sandown caps and trademark safari suit.  This latest, The Case of the Man Who Died Laughing, concerns a duplicitous guru, cheerfully bilking his believers, when Vish Puri is called in to investigate a mysterious, seemingly supernatural death.  Great fun!  Also love the nicknames he's given his assistants, driver, etc. i.e.: Handbrake (doesn't use it enough), Facecream, (lovely female operative),"Tubelight (because he was usually slow to 'flicker on' in the morning."

In the course of his adventures, the chubby fellow is continually downing all sorts of delicious, mostly fried little spicy Delhi snacks; chuski, aloo tikki masala, dhokla, paapris, pakorhas, and etc., trying meanwhile to keep from leaving any residue on his clothing, which would betray him to his wife.  She prepares him healthy food, such as a "veg cutlet" for lunch, always reminding him of his doctor's warning.

I was not led to fry anything, though those snacks do sound like something tasty to buy prepared, in Delhi say, but rather to do a spicy  fish dish, inspired by a Yotam Ottolenghi recipe in Nopi, Gurnard, Baked in Banana Leaf.  We don't have that fish here in Hawaii, however he mentioned another firm, white-fleshed fish could be substituted for it.

Continue reading>>
Posted by Claudia at 10:31 AM 8 comments: 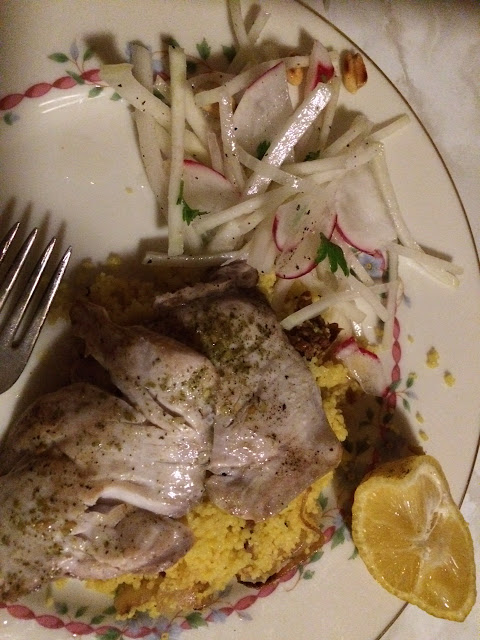 We've all been hearing lots of good things about Yotam Ottolenghi over the past several years (at least some of us have) and seen various recipes, book reviews, interviews, etc. popping up on the internet; well if you had any doubts, I am here to tell you the hype is totally deserved.  After checking out two of his cookbooks from the library, Ottolenghi, the Cookbook, and Nopi, just to give the dude a try, they are now on my to buy list, very definitely.  Absolutely inspiring, from his creative, exciting use of new and old ingredients, to beautiful photography and good directions.  I am impressed! 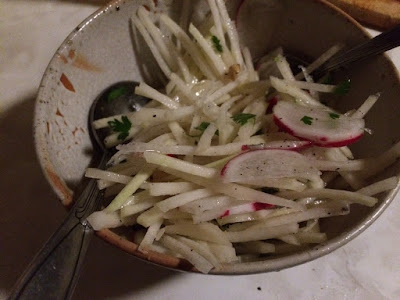 Just for example, tonight's dinner, nothing fancy - a salad of julienned kohlrabi, with radishes, simply seared mahimahi, dusted with a bit of za'atar, accompanied by a couscous which included golden, caramelized onions.  None of which recipes were followed to the letter; it was his original ideas that got me going.  I threw toasted peanuts into the salad, and added dried chanterelle mushrooms, resuscitated in a saffron broth,  to the couscous, replacing what my pantry was lacking with what was available - to good effect, if I do say so.