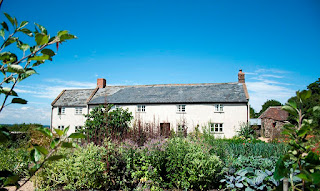 I've been enjoying dipping in and out of Hugh Fearnley-Whittingstall's  River Cottage Every Day, though really, it's only a "cottage" in the sense of those lovely, big estates of a bygone era, on the East Coast, humbly referred to as cottages by their owners.  He at least is out in the vegetable patch occasionally, (judging from photos in the book) working at his gardening as well as cooking.

This recipe for warm leek and white bean salad with mustard dressing was delicious and a perfect first course along with some fresh baked bread.  We must give some credit here as well to Tamar Adler's section on beans in An Everlasting Meal.  She was such an encouragement to me about something so basic.  After a run of bad experiences, due to the keeping ability of dried beans in Hawaii.  I tossed all of mine and have begun again, with small amounts of a select few, meant to be used rather soon.  They don't keep long in the tropics, and refuse to soften.  She takes such care with the preparation, and suggests making a big pot of them, enough  for several meals during the week.

Continue reading>>
Posted by Claudia at 7:41 AM 13 comments:

Pub Grub for Bryant and May 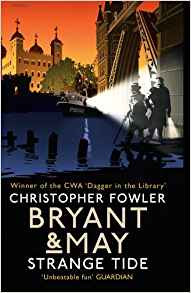 My latest read in the Peculiar Crimes Unit Mystery series by Christopher Fowler, is Bryant & May: Strange Tide.  I'm caught up now and will just have to wait (impatiently) for the next in line. Anyway, being as the I Heart Cooking Clubs (IHCC) theme this week is Pub Grub, it fits right in with my fiction book selection.  The two elderly detectives spend a goodly amount of time in London pubs.  So, we're serving them up a digital lunch of Chicken and Leek pasties.  Though that term is a bit cringe-worthy, harkening as it does to naughty night club strippers.  I would prefer turnovers, empanadas, meat pies, hand pies, take your pick.  Good, tasty finger food at any rate -  the recipe from our IHCC featured chef, Hugh Fearnley-Whittingstall's scrumptious cookbook, River Cottage Every Day.

Arthur Bryant, the oldest of the detective duo, by 3 1/2 years, is also the funny, wildly eccentric, totally intuitive, odd man out to his straight man, John May, who tries, unsuccessfully, to keep his partner in line with Metropolitan Police standards of operation.  Let's just say that Mr. Bryant operates out of the box.

Christopher Fowler has got to be one of the most inventive, witty, and hilariously funny writers on the scene today.  Mystery or otherwise.  As The Guardian says, he "takes delight in stuffing his books with esoteric facts, together with a cast of splendidly eccentric characters (and) corkscrew plots, wit, verve and some apposite social commentary, they make for unbeatable fun."  Totally on spot. Of course I've raved on previously about his novels, The Memory of Blood, and The Water Room.  Terrific reads. 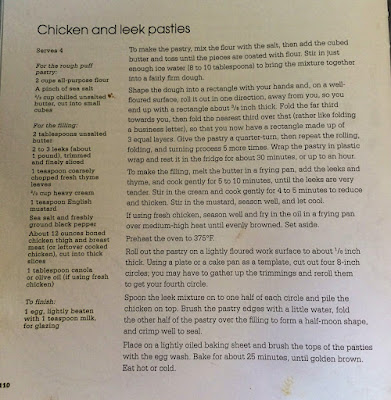 So, Pub Grub.  I've had some in my day, not a whole lot as I don't really frequent pubs, since my husband doesn't drink.  In London I did enjoy fish and chips with a side of mushy peas in a nice pub near the Tower bridge, in Honolulu there are a couple of Irish pubs we've gone to, where the music was great, and in Ireland we  popped into one or two.  That's about it.   Still, you don't need to be in a pub to serve up some typical pub grub. 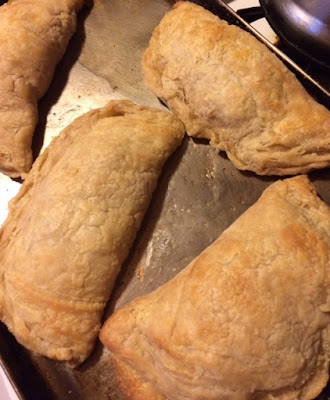 I especially liked the way Hugh's recipe separates the slices of chicken from the lightly caramelized onion and cream filling.  When you bite in it's not all smushed together, and the taste is sublime.  I used a thick kefir cream and previously prepared chicken. (you notice how I'm not using the L-O's term anymore?)  My pastries didn't get crimped too beautifully though.  Still they were yummy. 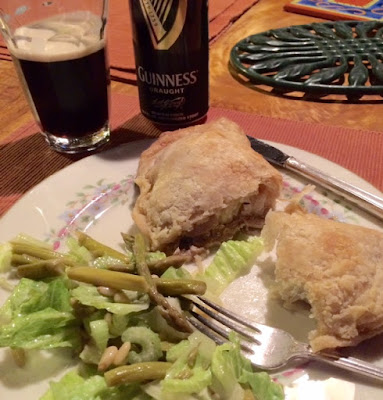 These little meat pies are great to take on picnics, as your lunch to go, or just for dinner with a bit of salad. You'll notice I'm also having mine with a glass of Guinness for more pub authenticity.

And, now a slight diversion on a little known pathway, about that particular sort of Guinness, the Draught, black label with the harp, it gets rid of tape or heart worms in your cat or dog.  I kid you not.  Just 1 oz. per 20 lbs. of critter, due to the particular type of hops, and that Dublin water, which renders worms sterile.  You can do your own research, but here's a link..  I was looking for something more natural, to replace the rather toxic meds from the vet, for our elderly kitty and came upon this info. And, yes the cat is fine now.  End of rave. 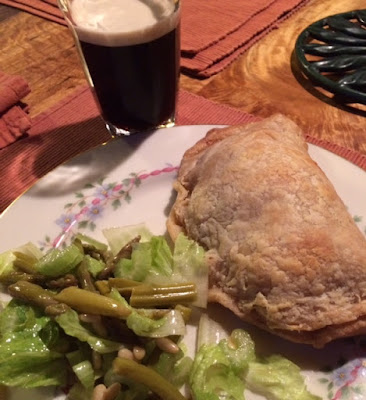 I'm linking this post to Beth Fish Reads for her Weekend Cooking event and to IHCC (I Heart Cooking Clubs), so be sure to drop in and link up yourself or get some good book suggestions and or cooking ideas.
.

Cooking In Her Kitchen 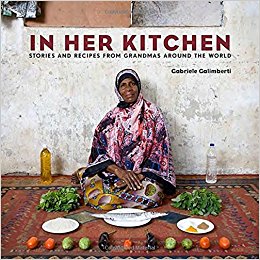 An absolutely delightful book!!  In Her Kitchen, Stories and Recipes from Grandmas Around the World, by Gabriele Calimberti.  Soooo precious, these lovely women in their kitchens with a meal they've prepared for family and friends.  And, what a raft of countries are represented in the pages of his beautifully photographed book.

Gabriele begins with a photo of his own grandmother, Marisa, in her kitchen in Castiglion Fiorentino, Italy on one side and a shot of the meal on the opposing page, then her story and recipe follow on the next two pages.  He continues with that format throughout the book, making for 58 evocative profiles and recipes.

All so different, and sympathetically portrayed.  Several of them had me in tears.  No matter their situations these special women show their love for home and family through the food they prepare.  As the publisher's blurb states:

"The kitchens he photographed illustrate both the diversity of world cuisine and the universal nature of a dish served up with generosity and love. At each woman's table, Gabriele became a curious and hungry grandson, exploring new ingredients and gathering stories....From a Swedish housewife and her homemade lox and vegetables to a Zambian villager and her roasted spiced chicken, this collection features a global palate: included are hand-stuffed empanadas from Argentina, twice-fried pork and vegetables from China, slow-roasted ratatouille from France, and a decadent toffee trifle from the United States."

Mango Crepes for Life from Scratch 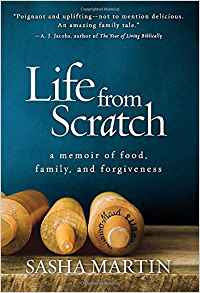 Our Cook the Books Club selection for April/May is Life from Scratch, a Memoir of Food, Family and Forgiveness, by Sasha Martin.  All in all, heart rending, and poignant, but not my favorite memoir.

Just extemporizing here, as it's all another's history, but right at the outset, one would have thought that a woman with "Mom's" independence of mind, and spirited personality would have tucked her kids into their car, with all essentials and split for the West Coast or somewhere in between, rather than give up her precious children once again.  Especially since she regretted turning over her first two to an ex.  It's not explicitly stated, but perhaps she would have lost her welfare?  It happens all the time, for one reason or another, children are put into foster homes. That whole scenario bothered me.  Particularly as we see the awful effects it had on the children of both her relationships, based on Martin's memories. Definitely where forgiveness came into play.

Children without the mother they loved, no father, the business of her beloved brother's molestation and suicide, the coldness of her foster mother (which you can actually sort of understand, taking on two teens, angry and unhappy at leaving their own mother).   An interesting, honest, albeit sad story. 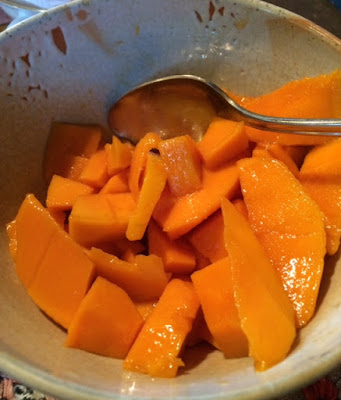 All that aside, and two thirds of the book in, we come to a point of, "Forgetting the past and looking forward to what lies ahead,"  I loved the whole concept of  her Global Table Adventures, cooking right through the countries of the world, alphabetically.    I would like to give that a try myself, maybe take the remainder of my life, certainly no rush if you're not planning a book from it.