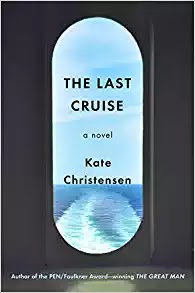 I truly enjoyed my vicarious trip aboard the 1950s vintage ocean liner, Queen Isabella, on  The Last Cruise, by Kate Christensen.  Before heading to a scrapyard, the dowager vessel is making her last run, a final voyage to Hawaii and back, with all the bells and whistles, highlighting an era of luxury cruising.  The novel gives us a terrific peek into life behind the scenes with various passengers, an owner, the kitchen crew, and  relationships within a Jewish String Quartet, also facing the end of their careers.

From the Publishers:
"For the guests on board, among them Christine Thorne, a former journalist turned Maine farmer, it's a chance to experience the bygone mid-20th century era of decadent luxury cruising, complete with fine dining, classic highballs, string quartets, and sophisticated jazz. Smoking is allowed but not cell phones--or children, for that matter.

But this is the second decade of an uncertain new millennium, not the sunny, heedless fifties, and certain disquieting signs of strife and malfunction above and below decks intrude on the festivities. Down in the main galley, Mick Szabo, a battle-weary Hungarian executive sous-chef, watches escalating tensions among the crew. Meanwhile, Miriam Koslow, an elderly Israeli violinist with the Sabra Quartet, becomes increasingly aware of the age-related vulnerabilities of the ship herself and the cynical corners cut by the cruise ship company, Cabaret.  When a time of crisis begins, Christine, Mick, and Miriam find themselves facing the unknown together in an unexpected and startling test of their characters."

Continue reading>>
Posted by Claudia at 8:01 AM 5 comments: 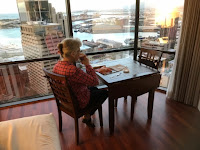 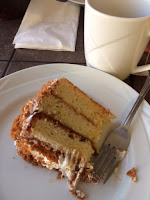 There is a little restaurant, in a bowling alley in Aiea, on Oahu, called The Alley.  This place is what you might call a hole in the wall, or a hidden gem.  Most local people do know about the place, but it took Marg the Intrepid, in Australia to clue me in.  She wanted to come to Hawaii to see the Arizona Memorial and partly for the Alley's Lemon Crunch Cake.  Now we don't hop over to Oahu all that often, and when we do go, it is not to Aiea.  However, Bob had his Kaiser eye surgery not too far away.  And we were taking advantage of Uber, so no worries about finding it. Our driver was an older Filipino gentleman who asked us how we knew about The Alley:)