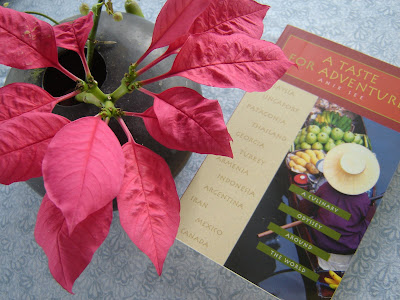 Finally, an 11th hour arrival of the long-awaited book, A Taste For Adventure, by Anik See.  After 4 or 5 mistrials at Amazon, books supposed to be in stock, then later cancelled, due to "out of stock".  Thank you jfbook!  It was the December/January selection for our online, Cook the Books Club, hosted this time by Rachel, the Crispy Cook.

Ms. See is a terrific writer, and would almost inspire me to do all that again.  Lug around a backpack, check into a town not knowing where we'd be sleeping (hoping it wouldn't be on a bench somewhere). But, now older and semi-wiser?, plus it's a different world for travelers now, and the thought of parading naked before airport screeners?  Yikes.  Don't know if I'm ready for it.  Her train trips in Malaysia and Indonesia especially brought back memories.  With children and adults running alongside, selling their food to passengers, as well as up and down the aisles, while we sat exhausted, on hard, wooden seats, amazed at the spectacle of it all.

To me, one of the best things about traveling is trying new, wonderful foods.  And, I'm looking forward to trying many of the delicious sounding recipes Anik included with her adventures in this book. I especially enjoyed her Georgian experience.  What a resilient, hospitable, marvelous people.  If I were to travel again, perhaps it would be to Georgia, and also Moldovia, where my husband's family came from, before emigrating to Germany many years ago.  Or, Istanbul and Armenia.  I narrowly missed going there three years ago, but as we were traveling in Greece, that was discouraged.  By Turkey, anyway.

For my recipe I decided on a dish inspired by the flavors of Armenia, a traditional  preparation which uses either lamb or beef -  Meatballs in Lemon Sauce, from The Silk Road Gourmet by Laura Kelley.  I've usually only had meatballs fried, for either Sauerbraten or Spaghetti.  This called for simmering a spicy meatball preparation in broth, then reducing and thickening the broth, which becomes an amazingly creamy, rich lemon-flavored sauce - with no added cream. 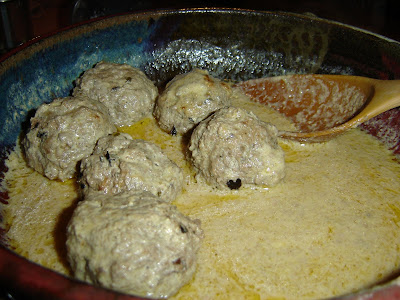 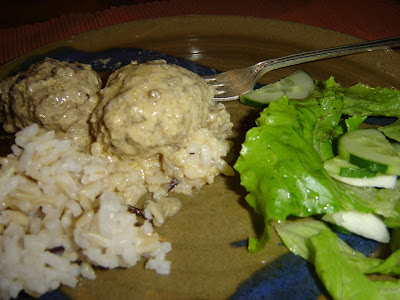 Great over some basmati rice or a traditional Armenian Pilaf.  We both thought this dish was just fabulous.  A definite do again and again, addition to my meal repertoire. Thanks for all the inspiration, Anik See, and Laura Kelley too for a super recipe.

P.S. Here is a video link to some wonderful footage and discussion of the hospitality of the peoples along the "Silk Road".
Posted by Claudia at 4:55 PM

I'm so glad you were able to get a hold of that book and enjoyed it. The Armenian meatballs sound intriguing. Thanks for your Cook the Books entry!

I like the sound of the sauce on those meatballs! Lemon just lifts flavours so much.

I was afraid it wouldn't come in time, but was worth the wait.

Those meatballs look amazing--love the lemon sauce. Such a fun pick. I am sorry you struggled to find the book--I wish I had known, I could have sent over my copy. Oh well, I am glad you got it in time for such a great entry for CTB.

Thanks Deb, I really appreciate the thought, had wondered if I'd be able to participate this time. Though, really enjoy this blog group, as it combines two of my favorite things - cooking and reading.

How fantastic is this! I made meatballs for the first time after not making them for a while this week and now I am on a kick. That sauce looks divine.

I can't believe all of the trauma you went through to get the book! Definite dedication right there :D

I always leave this site hungry and appreciating the finer foods in life. Thanks for taking the time to share all your delicious recipes. I may even need to get an aebleskiver pan - it seems to be a multi-use one. Glad, too you found your book. Looking forward to connecting with you tomorrow.