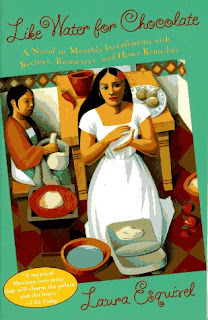 I seem, without any real forethought, to be on a South of the Border groove.  We recently had Columbian Cassava Cake, Pork Enchaladas in Green Sauce, Chicken Molé Poblano, and now, thanks to our  Cook the Books Club, a Mexican dish called Champandongo.  Hosted this time by Deb of Kahakai Kitchen, the book selection for February/March was Like Water For Chocolate by Laura Esquivel.

Her novel is a love story, as well as a fantastical, adult fairy tale, on the order of the Brothers Grimm?  It reminded me a bit of an ancient Greek tragedy, only with more sex and magic, besides recipes, which is usually fun.  I won't go into any summaries of the story here, (there is a good one one at Cook the Books' site) just read her novel, if you haven't already.

So, for a strange tale, I thought an unusual concoction was called for here.  Something not seen on the ordinary Mexican restaurant menu, and, one I'd never made or heard of.  My research didn't turn up very much on the origin of, or alternate recipes for Champandongo.  I have three Mexican cookbooks, none of which had a mention, and my online surf came up mostly with references back to the book, and tourista restaurants in Mexico that serve it  (mainly due to the books' popularity).  Though it was described by a few as delicious, albeit ugly.  So, my challenge was to keep the deliciousness, and improve on looks, if possible.  Anyway, when you get right down to it, how lovely is a slab of steak?  Ok, without prior taste memory?

Our Cinderella heroine, Tita, makes her dish with a lot of interruptions due to family strife, and suppressed rage.  Which is interesting, because here in Hawaii, a Tita is usually a woman who doesn't suppress any of it.  In fact, you'd better watch out.  If I did that, probably half the ingredients would be either left out or mixed up.  As it is, I forgot the citrus element. 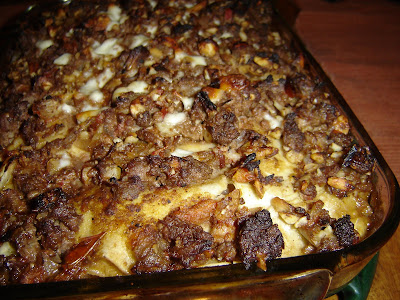 Since the amount of molé called for in this was equal to what I had remaining from my Chicken Molé Poblano, it seemed doubly appropriate to make this ASAP.   Frugal sort that I am.  Also, luckily, our local natural foods store carries queso Oaxaca, very close (maybe just in my imagination) to the queso Manchego called for in Champandongo.  Sounds like a dance, doesn't it?  Put on some salsa music while cooking.  I love all these names.  This dish has also been called a Mexican Lasagna, as it layers meats, sauce and cheese with tortillas, rather than pasta.  Directions continue after the jump.
My sweet sous chef helps with the tortilla warming procedure. 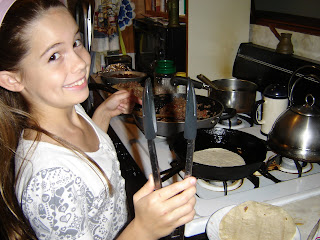 Sauté onion in large pan with several tablespoons oil. Once onion is translucent, add beef and pork. Sprinkle meat and onion mixture with cumin and sugar. Once beef and pork are golden brown, add tomatoes, nuts and the citron. I skipped this ingredient by accident, but don't think it was missed.  Actually, if doing again, I would use preserved lemon, sliced finely, or some lemon zest.  I'm not one for sweet in my main dish.

Meanwhile, as meat is browning, add molé into the chicken stock and stir constantly until molé has a thick, soupy consistency. Heat tortillas in 1-2 tablespoons of oil in a non-stick pan, and stack to one side.

Spread the cream on the bottom of a large, glass casserole dish. Top with a layer of tortillas, then a layer of the meat mixture, then a coating of molé, and finally the cheese. Repeat this process as many times as necessary until the dish is filled. Put the pan in the oven and bake until the cheese melts and the tortillas are softened.  About 15 min.  Slice into squares and serve immediately, perhaps with re-fried  beans and a salad. 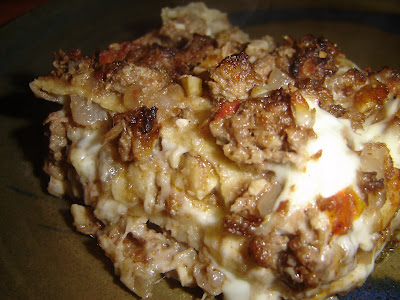 We all enjoyed this dish and everyone had seconds. Some, I won't name names here, thirds and fourths.  If making again, I think the only change would be the above mentioned grated lemon zest, instead of candied citron, and maybe a layer of jalapenos in the middle, or chopped and added in with the meats.  Because, some like it hot.
Posted by Claudia at 10:25 AM

It was very delicious!! Hot would be good too.

Glad you liked the book and what a great CTB entry. It looks perfect and perfectly delicious too!

That is one cute sous chef! I like the name of this recipe and it seems like I could whip up a batch for my gluten-free hubby. Sounds great!

Good choice Deb, and thanks.

I seem to do better gluten-free or close to it, the older I get.

Very nice! I find the name of this recipe intriguing. I like the way you describe your goal "keep the deliciousness and improve on looks." It sounds like you make several people happy with your dish.

Great job! Champandongo is not well known outside the Northern states of Mexico, maybe that's why you didn't find much information about it. In the middle of the country we have a similar dish called Aztec Cake that I usually make with chicken or fish that is always a hit at parties.

Anyway, great review and recipe. You did an amazing job :)

Thanks Ben, no wonder I couldn't find any Manchego Mexican style cheese here. I didn't really think it was the same as the Spanish (I have some of that and it's a hard grating cheese), but was told it was similar to queso Oaxaca or to Mozzarella.

This was definitely one of the dishes I considered making for Cook The Books and, now that I've seen your version, one that I will definitely make in the future. This looks so delicious!