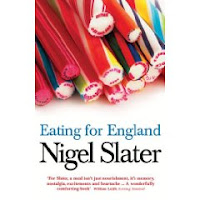 And, there you have it.  My inspiration from Nigel Slater's, Eating for England, would have to be pudding.  His firmly tongue-in-cheek book of essays on the food quirks of that nation, is our current Cook the Books Club selection. Our assignment was to read the book, and then to cook and post about something it inspired.

This is not your pick up, and can't stop reading thriller, or romance novel.  It can be read between those sorts of books very easily. Taken up and put down at leisure.  A selection of stand alone, funny vignettes and little rants on the quirks, habits, and treasured food traditions of Britain, it is a loosely informative, enjoyable romp.   We learn such things as the usefulness of the Aga (mainly for making proper toast and keeping the dog warm), what makes a perfect Welsh Rarebit, the erotic appeal of a Cadbury's Flake, and the history and social indications of Trifle.  Good fun throughout.

I especially enjoyed Slater's dissertation on Boiled Brussels Sprouts, since Bob has just laid down the law around here, insisting they be boiled or steamed only.  None of that roasted, caramelized bunk.  Which, personally I don't really care, I just let him eat them ALL. 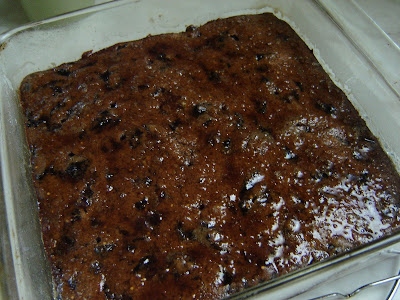 I had copied out a recipe for Sticky Toffee Pudding  from Epicurious over a year ago, meaning to make it, so the section entitled, "Dick and Other Delights", was the prod needed to locate and just do it.  Dick there is referring to a famous pudding, "Spotted Dick", which in some circles has been renamed Richard, for political correctness. And, the spots, it turns out, are raisins in an otherwise light colored cake. Also, we learn that pudding, in England, is synonymous for dessert.

For my version, instead of using only dates, I improvised with a combination of dried cherries, figs, dates and raisins. Also, instead of water, called for in the sauce, I used dark rum.  And, liked it a lot. 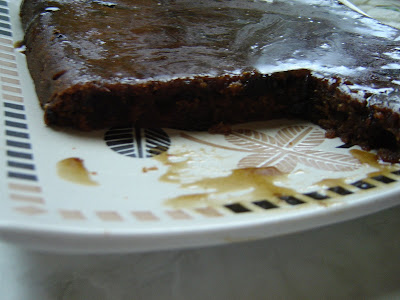 Put oven rack in middle position and preheat oven to 350°F. Butter and flour an 8- by 2-inch round cake pan. I used a square glass one and don't think it matters a bit.

Pour batter into pan and bake until a wooden pick or skewer inserted in center comes out clean, about 30 minutes.
Meanwhile, melt remaining stick butter (you might want to cut this down to 1/2 stick) in a 2-quart heavy saucepan over moderate heat and stir in remaining cup brown sugar, rum, and a pinch of salt. Boil over moderately high heat, uncovered, stirring occasionally, until sugar is dissolved and sauce is reduced to about 1 1/4 cups, 2 to 8 minutes. Remove from heat and cover.

Transfer pudding in pan to a rack and poke all over at 1-inch intervals with a chopstick. Gradually pour half of warm sauce evenly over hot pudding. Let stand until almost all of sauce is absorbed, about 20 minutes. 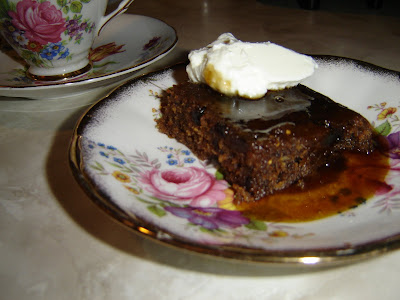 Cooks' note: Pudding, soaked with half of sauce, can stand at room temperature up to 2 hours. Reheat in pan in a 300°F oven 10 minutes. Warm remaining sauce before pouring over pudding. Can be served with a scoop of vanilla ice cream, clotted cream or, as I did with full cream yogurt.  This is is truly a sweet, gooy, sticky delight, which we all enjoyed.  How could I serve pudding without having grand kids over?
Posted by Claudia at 4:23 PM

The dessert looks wonderful! I am not a big fan of this pudding but my mother loves it to bits!

MMMMMMMMM,...I will make this for her!

Great review! It was a fun book that I really enjoyed too. Love your sticky toffee pudding--and all the dried fruit you added (and of course the rum!). It looks delicious.

Sticky toffee pudding is a great english recipe I must say. I am glad you liked the book!

Thanks for stopping by and visiting me! Nigel Slater's book sounds like a great read and I think you made a fantastic choice with the sticky toffee pudding. I've always wanted to try one of those!

That pudding looks wonderfully sticky and oh so good. Great review and take on Slater's book!

The gooey, sticky character of the pudding come across clearly from your photos. I am sure your grandchildren were delighted.

Oh, simply YUM! That's what I need with a cup of tea tonight...sticky toffee pudding! And I love the way you described the book too!

Wow! This looks amazing...I can almost taste it from here :D Perfect review of Eating for England.