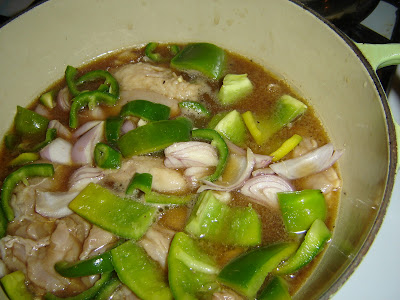 Years ago, in a land far far away - actually it was the Island of Oahu, on the North Shore where that famous big winter surf is, we lived in a little beach house (a rental) right on the edge of the sea.  In fact, during a few bad storms the water washed sand up into the yard and the occasional wave gave a slap at our sliding glass door.

Next door to us lived a very interesting neighbor, a former Las Vegas nightclub entertainer.  He was a limbo dancer, who had performed under that flaming, and very low bar.  A Filipino man with an ever changing line up of pretty young (live in) baby sitters for his two kids.  To make a long story shorter, over the course of time, he shared a few of his recipes with me.  One, being Pork Adobo.  I've since used the recipe for chicken as well, and have added in various vegetables.

I will give his original recipe, which is the pork version, as it has the fat rendering information, which was something I was unfamiliar with at the time and found useful.  You don't have to cook all the veggies in the vinegar and shoyu broth, but can add some in later, as I did here with the cubes of butternut squash.  The peppers were cooked with the chicken. 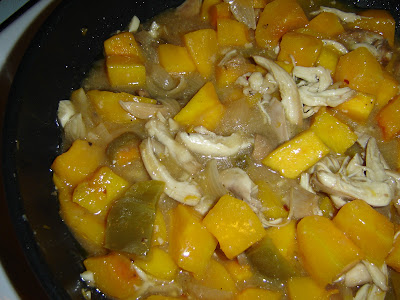 Cut pork into bite size  pieces, separating out the fat and skin.  Marinate the meat in all ingredients, except water, for at least a half hour.  Then add water, bring to a boil, turn down heat and simmer until tender. Liquid should be enough to almost cover the chicken.

Meanwhile, as the meat is marinating, in a skillet, boil the fats in 1/2 cup water, then render until crispy.  Add cooked meat and fry until brown and crispy, (for chicken I eliminate this step) removing meat and any vegetables, leaving marinade boiling til stock is reduced.  Vegetables may be added at any point here, so that they just get cooked.

If the chicken was fatty, strain stock into a bowl and refrigerate until fat can be removed.  Charmaine Solomon gives that direction in her recipe, though I've never bothered.  Reheat in frying pan.    I thicken the broth with cornstarch after adding the meat and vegetables back in.  For chicken adobo, you may also add in 1/4 cup thick coconut milk when you reheat the sauce.  This also according to Charmaine, which I had yet to try.  So, for lunch, with a nod to authenticity, into my remaining bit of stew, I added  some coconut cream, and sprinkled on for taste and color, a leaf of cilantro.  A leaf?? you may ask, and yes that's correct, because it is what we call Puerto Rican cilantro around here, a tropical perennial, which could as easily be called Mexican Cilantro or.... 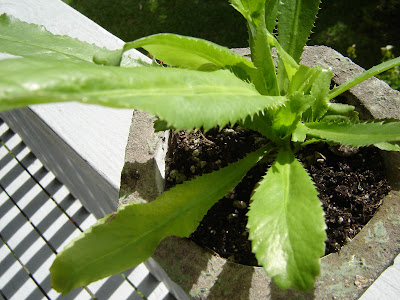 You see the little saw-toothed edges?  You neatly trim those away, remove the thicker end of the stem, and chop. 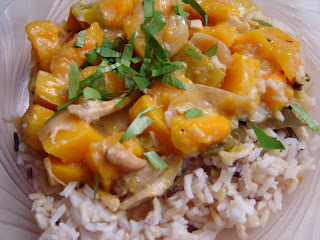 Thus we have Chicken Adobo in it's lunchtime incarnation.  Very nice with the added depth of flavor and smoothness from the coconut cream.

Over the years, Adobo has become one of my old stand by favorites, quick, easy and  full of flavor. It is traditional to serve this with plain white rice.  I usually mix mine with part brown and some wild rice.  I will be sharing this with Hearth and Soul Hop, co-hosted by A Moderate Life.  A good place to visit and browse all the great recipes.
Posted by Claudia at 11:21 AM

I always wondered what Filipino Adobo is. Great post.

Just wanted to let you know that the Presto Pasta Nights roundup is now live over at The Crispy Cook. Thanks for sending in your Pennes from Heaven recipe.

Wow, this looks so wonderful and so perfect for a cold night. I think you couldn't go wrong with chicken OR pork.

This sounds amazing....and that cilantro! I've never seen that before. Does it taste the same as "regular" cilantro? Very lovely! Thank you for sharing this w/ the hearth and soul hop this week :D