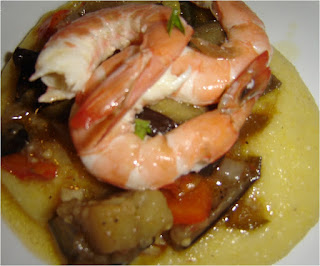 Our current Cook the Books Club selection is The Shape of Water, by Andrea Camilleri. A favorite author of mine, though on second reading, this first novel of his Inspector Montalbano mystery series, is not my favorite. Too much of the corruption, poverty and sleazy side of life in Sicily maybe. Albeit thankfully balanced by the Inspector’s sense of humor and fair play.  And who, with that, according to one of his favorite chefs, "was a good customer with discerning tastes."  However, even his love of and descriptions of good food are not given as much scope in this one.

Despite a slowish beginning of complex sentences, depressing descriptions of environmental travesties, and dour political mutterings, we do move on eventually into the plot, convoluted though it is.   I’m still not quite sure who all did what to whom and why.  Somehow you don’t feel too sorry for the various corpses.

But you have to love his conflicted main character, Inspector Salvo Montalbano.  He tries to do the right thing, despite the moral climate and political expediency, is known as a just man “who when he wanted to get to the bottom of something, he did.”  And, of course he does, intervening under cover to protect the innocent. 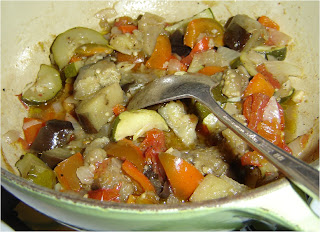 La Vignarola, a classic spring vegetable dish, is said to be what the wife of the wine maker serves for supper, though in my case made by the wine maker herself.  The French have a version, you may be familiar with, La Ratatouille.  Vegetable Stew in English.  I thought it might be something Salvo's housekeeper, Adelina, might leave for him in the refrigerator.  I used a mixture of eggplant, zucchini, bell pepper, onion, tomatoes and garlic, all layered with olive oil drizzled over and under, then simmered an hour.

Probably for a truly Italian meal it would be served on its own, as a separate course.  However, the current trend of stacking things, works well in this case, with the polenta serving as a sturdy, honest foundation to the vegetables in their brothy olive oil, and topped by the lemon shrimps, which Salvo mentions eating on page 97.  Apparently Adelina had left him a large dish of boiled shrimps, tossed with lemon and olive oil.  Though I did serve the courses for us to arrange as we liked.  Bob kept his separate. 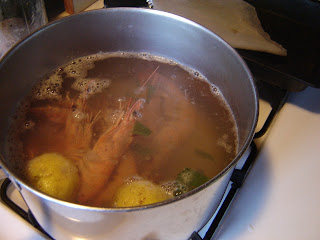 I had never previously boiled shrimp, usually just doing a quick stir fry or broil.  Always good to try new methods.  I brought a large pot of water to boil with a bay leaf, lemon with juice and shells, some fresh oregano and pepper, tossed in the whole shrimps (large ones from Kauai) for 3 minutes. 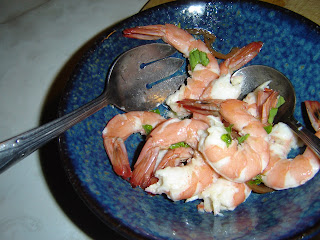 After they cooled down, I peeled and de-veined them, then tossed with lemon juice, olive oil, some basil and slivers of preserved lemon.  The polenta was just simple polenta, with butter and a few tablespoons of Parmesan added. 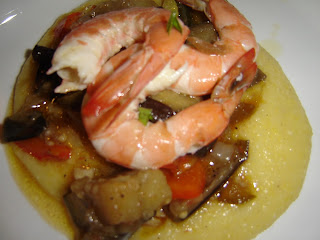 I absolutely loved every bite of this meal.  Just delicious.  Separate or together, as you like.  Visit the Cook the Books Club Round-up at the end of the month to see what everyone created, or as it's not too late, read the book and do your own. 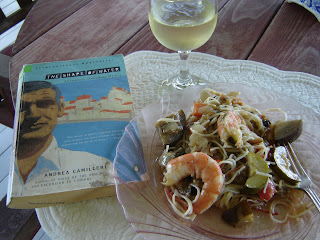 Luckily there was enough left, perfect tossed with angel hair pasta, for my lunch next day, out on the deck, truly scrumptious.
Posted by Claudia at 12:47 PM

It was interesting for me also to go back to the beginning of the series. After reading some 15 novels, Montalbano has become like an old friend and re-reading The Shape of Water was like re-living the first date. You can see that certain characteristics we have come to associate with him are not yet fleshed out, while others are already clearly there. I am sure Montalbano would enjoy your sumptuous dish. Remember, though, don't expect him to talk during dinner: he likes to be silent and concentrate on the food ;)

What a good idea. I agree that this book is not the most descriptive of food.
I worry about Salvo's diet - typical single man he doesn't have many vegetables so this would be ideal!

Very nice, I like the polenta and vegetables, but it's the shrimp that looks absolutely delectable! You can tell when shrimp is superfresh and supergood, and yours are just that. We often cook boiled shrimp, they come out with a wonderful lemony-dill -garlic flavor that makes them wonderful in salad. I thought about making shrimp with garlic for my entry, but then I decided to make shrimp with something extra. You will see once my post is published. I hope I have not taken my entry a little too far to the left though...

I love your inspiration too. I tend to be more literal so I love it when other readers "go out on a limb" so to speak and truly use their imaginations. That is what I love about this club. (I found the opening chapters a bit confusing too. I chalked it up to all the Italian names that were thrown at me. It was hard to figure out just where every corpse fit in to the mystery!) :)

Your still life with book and shrimp is just beautiful. I now want to make this repast.

Interesting to hear that the subsequent books have more of a food presence. I want to give the next one a shot.

Love, love, love your meal--both the la vignarola and the gorgeous lemony shrimp and polenta. I would have happily piled my shrimp on top of everything too. ;-)

I'd be very happy to open my fridge and find a bowl of shrimps that looked that good! And I am very jealous of anyone who gets to eat polenta (my husband is not a fan!).