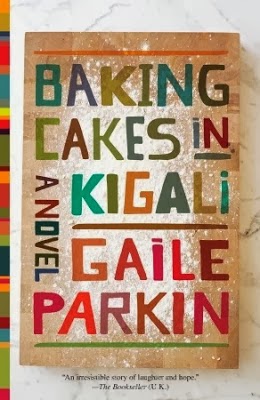 Our current Cook the Books Club selection, Baking Cakes in Kigali, by Gaile Parkin, was a wonderful glimpse of life in a distant land and culture, modern-day Rwanda, albeit in a place (University housing) heavily influenced by Western thinking, customs, food, etc., with a resultant struggle by some of the local people to hang on to African traditions.

In spite of all the horrific experiences endured by many of the characters in Parkin's book, an upbeat and hopeful mood was maintained.  There was humor and flavorful individuals aplenty, encountered by the heroine, Angel Tungaraza, through her home business of catering special occasion cakes.

I thought all the negative references to "white cake" as opposed to the brightly colored frostings on Angel's cakes was particularly funny.  Cake itself is not "African", and the bits of recipe we were given certainly had no claim to outstanding taste.  Similar to The Cake Boss, TV series.  It's all in the design and decoration, rather than any wonderful or distinctive flavor.  But that is quite aside from the chef's artistic outlet and entrepreneurial creativity.

In case you don't know what's going on here, we read a book selection bimonthly, and then cook something inspired by the work.  For my submission, I was tempted to bake three white cakes, with differing flavors.  About this time last year I made Black Cake, a West Indian specialty, so why not?  One of my very favorites is coconut cake, made with coconut cream and topped with shredded coconut on a fluffy white frosting.  Then the Sticky Lemon Cake, which I'd been wanting to make since reading a Nancy Atherton book which included that recipe, Aunt Dimity and the Deep Blue Sea.  Perhaps to be followed by a Butter Mochi Cake.   However, what I ended up with was the Sticky Lemon Cake and a Blackberry Mochi Cake. 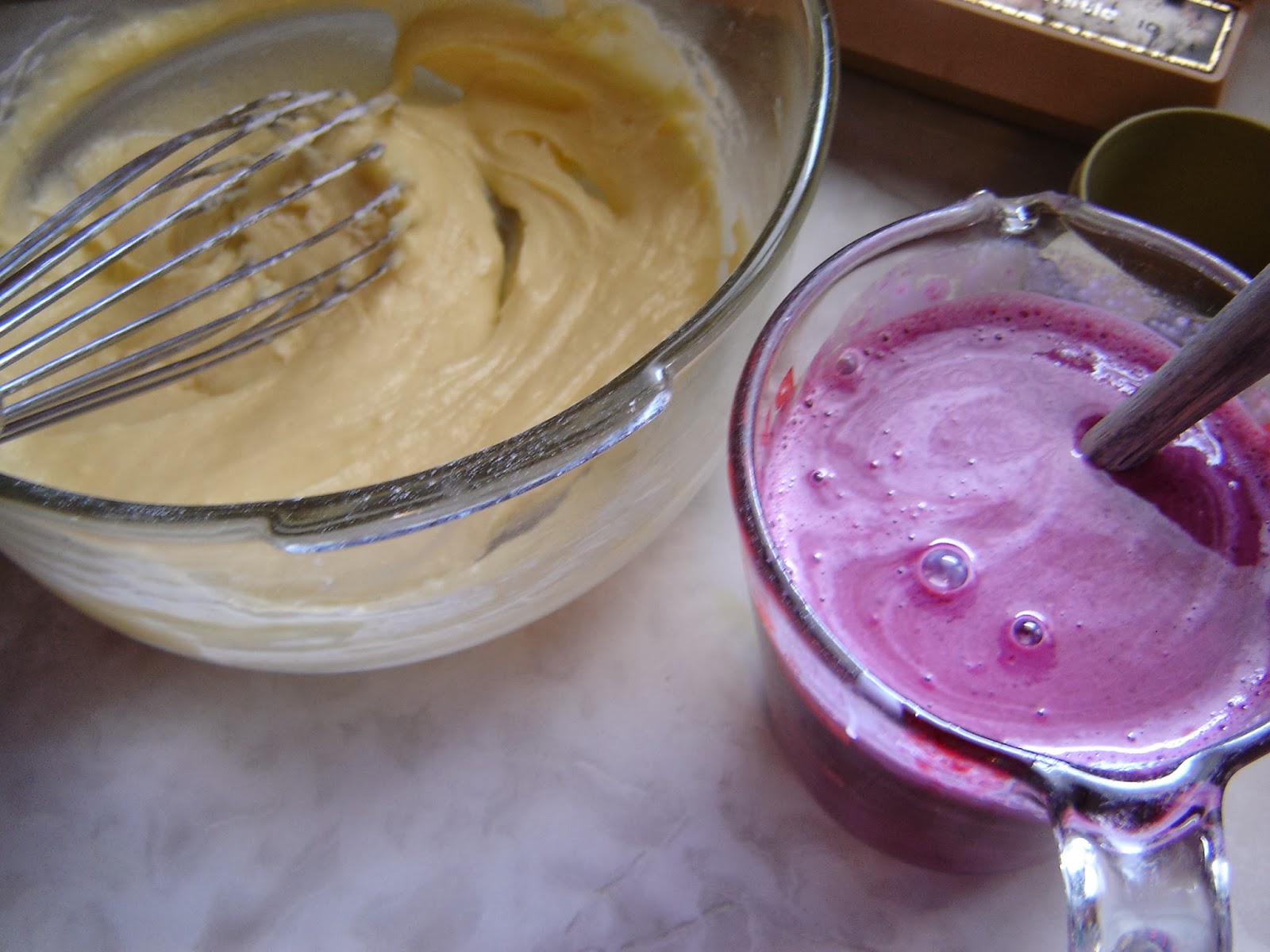 I had already posted Butter Mochi Cake, topped with chocolate ganache, so decided to color this one with blackberry puree.  Besides which, blackberry is the new chocolate, and sooooo delicious.  As it turns out however, sometimes it is better not to mix in.  The thickened puree would have been more of a taste contrast dolloped on as a topping. 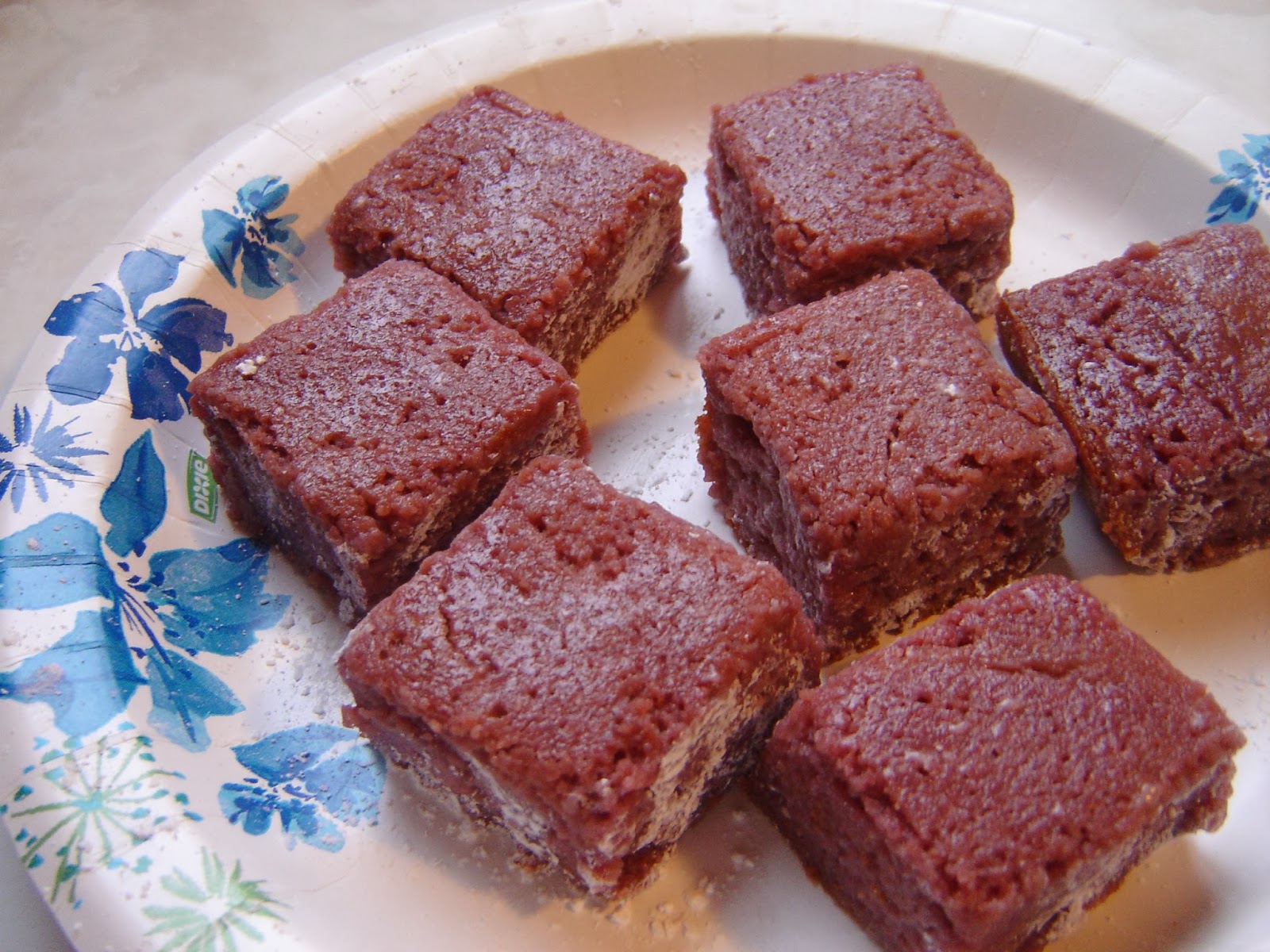 Which is not to say that this mochi was not good.  Just saying, I would have preferred those tasty blackberries separate.  I know from licking the spoon. 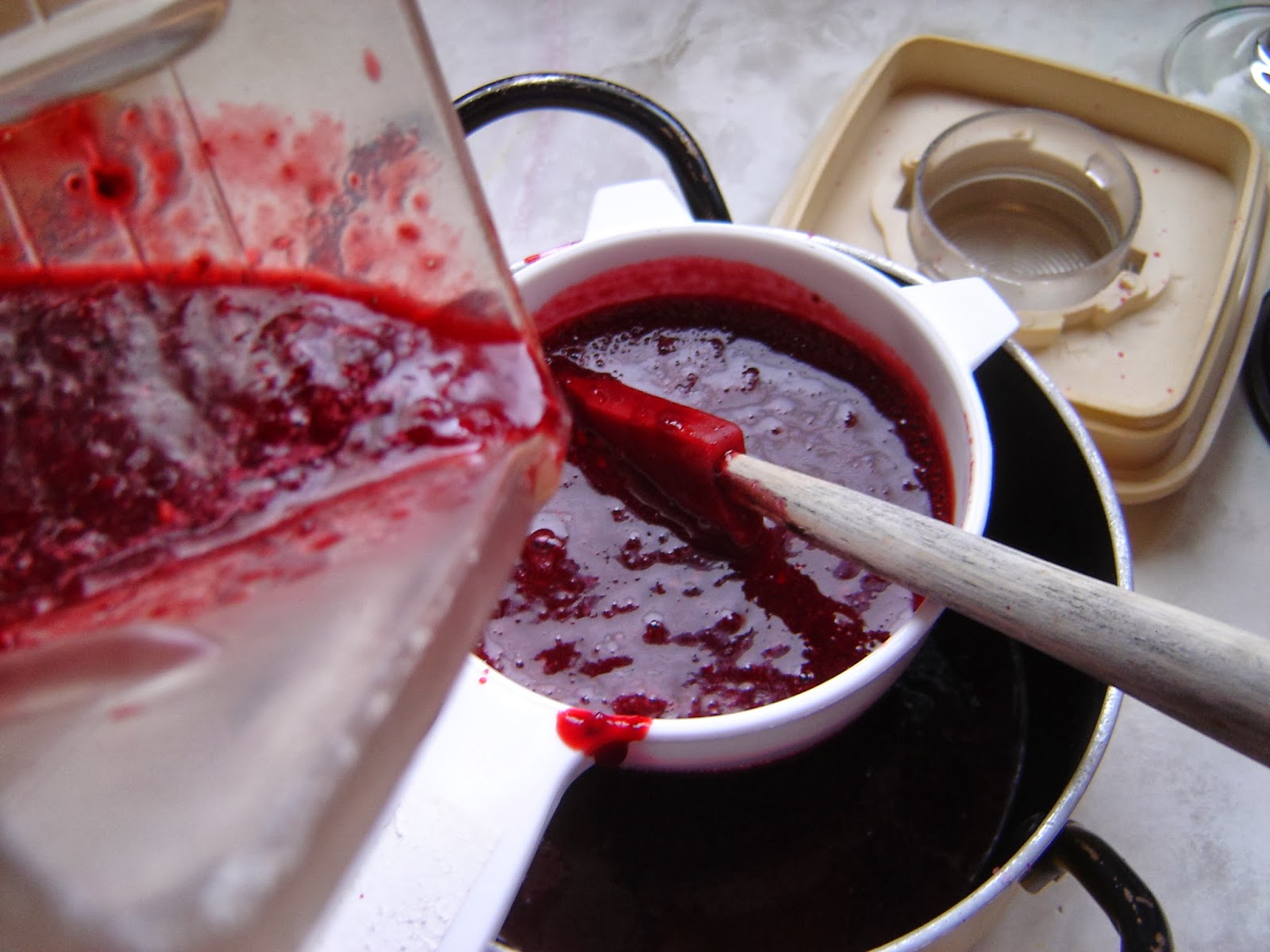 I simmered the 10 oz. frozen package of blackberries with 1/2 cup of sugar and 1/4 cup water, then briefly blended and put through a strainer.  Could have slurped it all down myself at this point.  Then substituted the sieved amount (1 1/4 cups) for that amount of liquid in the recipe.  See above link.

Mochi is a New Years specialty here in Hawaii, as well as in Japan, and the cake version is very popular too.  An example of cultural interchange. 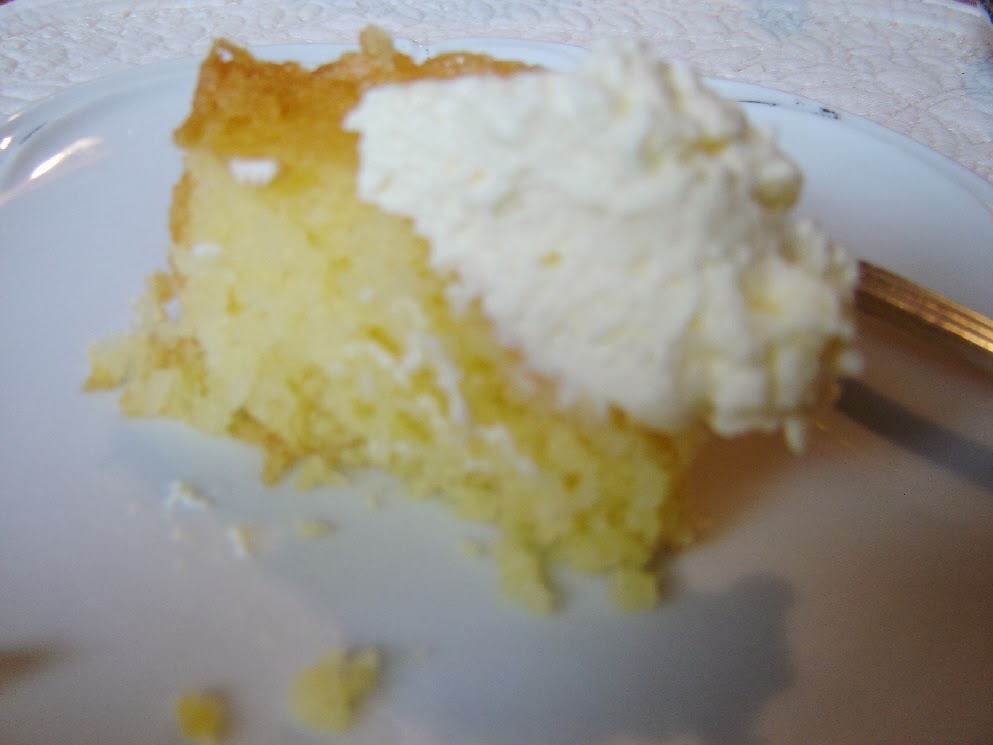 I have been enjoying Nancy Atherton's cozy mysteries, and especially the featured recipe included at the end of each book.  So I had copied this one and was just waiting for the right occasion.  Ergo.... our Cook the Books Club, and Christmas of course.  No fancy icings, only a large scoop of whipped cream.  Which isn't absolutely necessary, as the cake stands alone quite nicely. It is officially called:

Combine the sugar and lemon juice in a small bowl.  Whisk until the sugar dissolves. 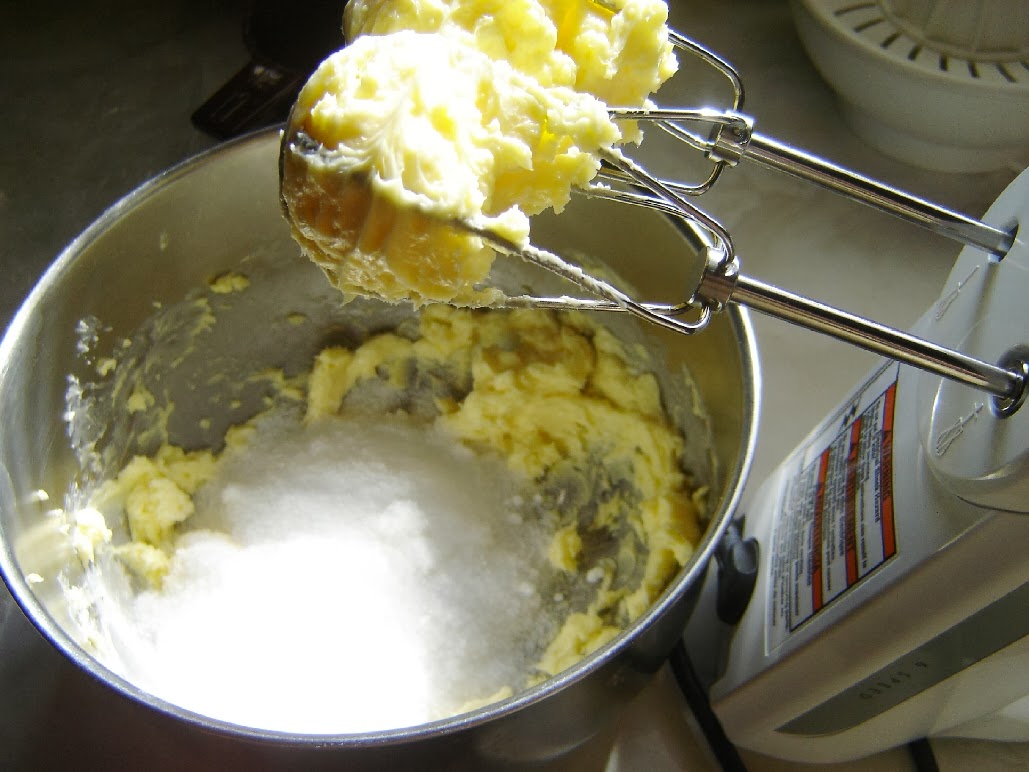 Use an electric mixer to cream the butter in a large mixing bowl until smooth.  Add the sugar and lemon peel and beat until fluffy.  Beat in 1 egg, then half of the flour; repeat.  Pour the batter into the buttered baking pan.

Bake about 25 minutes, or until a toothpick inserted in the cake's center comes out clean.  Place the pan on a rack.  Use a toothpick to poke holes all over the top of the cake.  Spoon the lemon syrup slowly over the cake, allowing it to soak in.  Cool the cake completely. 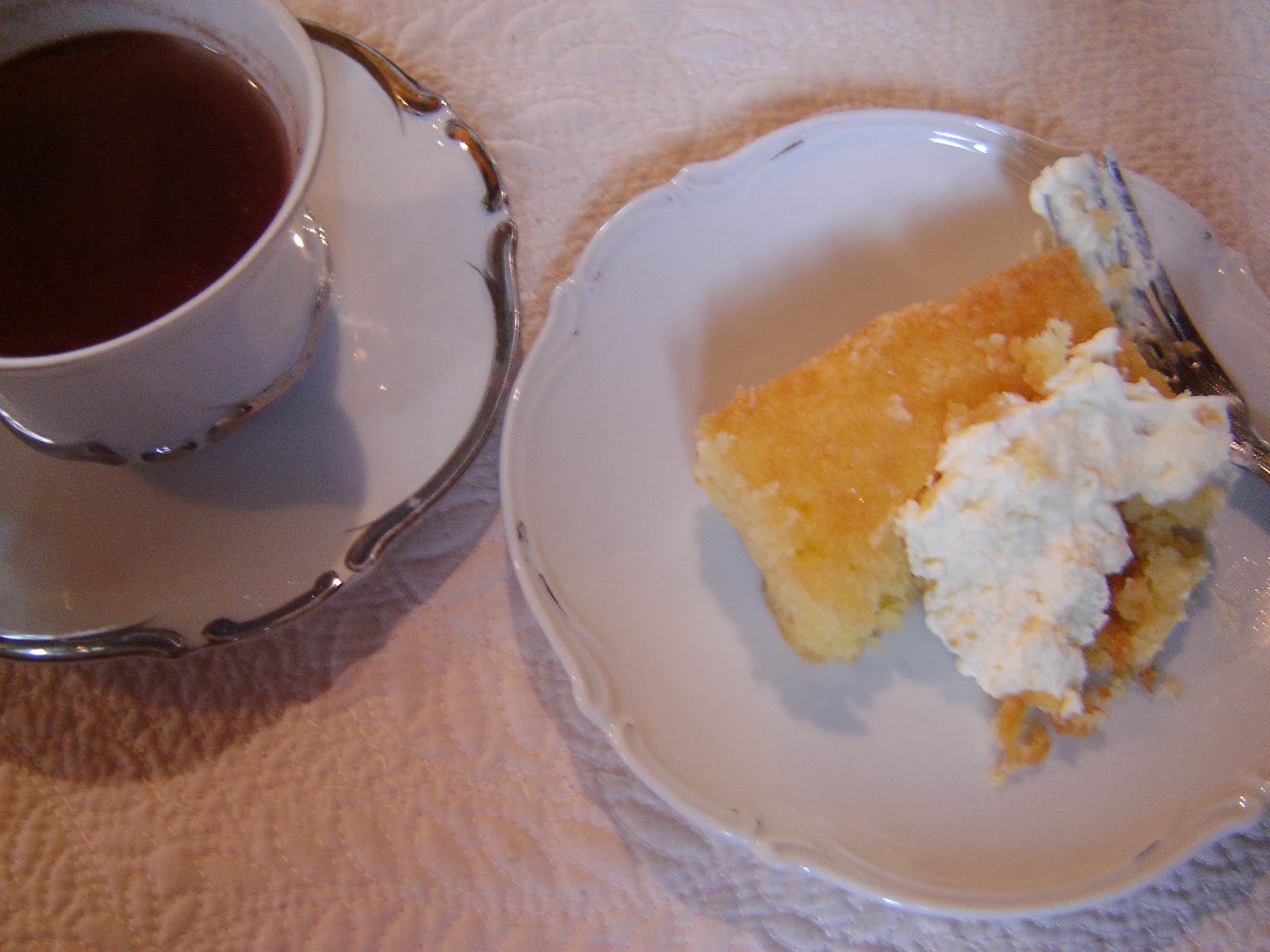 Sprinkle with confectioner's sugar or cut into squares and serve with topping of choice.  I love cakes like this one.  Delish!  It's all about the taste, not the fancy icing and shapes.  Though, those types can be fun to look at.  I have enjoyed many of those "Cake Boss" productions.

Be sure to check out the creations from our participants in this edition of Cook the Books Club at the end of the month.  It is not too late.  You have time to read the book and join in - until Monday, January 27th.
Posted by Claudia at 12:06 PM

Claudia Whenever I came here, I will find some unique delicious treat, love to try those mochi cake.

I love anything lemon. I have yet to make a lemon cake, but it's definitely on my to-do list. This looks great!

Great post! So glad you liked the book Claudia and it inspired two different and delicious looking cakes. I am a big mochi cake/bar fan and I love blackberry so that one is right up my alley and then you had to go and top it with my favorite cake flavor--lemon. You have me drooling now. ;-) Thanks for joining in this round.

I like your comments about the book. And two cakes in one post! I think Angel would love this...

You are right in describe Angle as an heroin. I opted too for a no African Cake. Looking at your Sticky Lemon Cake I'm sure she's happy and ready to take a slice of it with a cup of her good tea.

Claudia, I LOVE the flavor combinations you made. I will definitely give these a try soon. Thanks for sharing with Cook the Books.

I love the sounds of that lemon cake. You are so right, there are many "flavorful individuals" in this novel. You are also right about it being all about the colors and decorations (like Cake Boss). Nice analogy! LOL

I like that blackberry is the new chocolate, considering that I have quite a bit frozen. I remember reading that there is a place on the Big Island where they make mochi the traditional way for New Year's. I would like to see it. Nice choice of recipes to go with the book.

There is a place near Volcano here where blackberries grow and we've picked there. Also, that mochi place is Two Ladies Kitchen in Hilo, for when you come next time :)