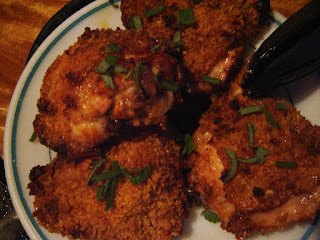 This recipe was inspired by a book I just finished, Susan Wittig Albert's, Cat's Claw, one of her Pecan Springs Mysteries, set in the Texas hill country.  Fun, not too nasty who-done-its.  The publisher's blurb on this states:


As the first female police chief in Pecan Springs, Texas, Sheila Dawson has cracked many a mystery in collaboration with local sleuth China Bayles. Now Sheila puts her smarts to work, sifting through secrets to find a killer on the prowl…

Larry Kirk, Pecan Springs’ computer guru, has been shot dead in his kitchen. At first Sheila believes it to be suicide, but further investigation reveals that Kirk’s death wasn’t self-inflicted. And the truth is reinforced by her friend China Bayles’ news—Larry recently asked her for legal advice in regards to a stalker.

As a police chief in a male-dominated force, Sheila meets many challenges, especially when her theories rock the boat in high-profile cases like that of George Timms, who was caught breaking into Larry’s shop. Now that Larry is dead, Sheila is sure the burglary is connected to the murder. But when Timms disappears instead of turning himself in, Sheila must prove she’s got what it takes to hunt down a predator who’s loose on the streets of Pecan Springs…

I enjoyed Albert's recent approach to character voice, shifting between the various leads, which brings more depth and insight to the story.  She also includes her usual interesting segues into different local and cultivated herbs, as Cat's Claw, which give each book its title.


Also included at the back of these novels are several recipes mentioned in the course of events.    None of which, in this case, called my name for dinner.  However, the thought of oven-fried, spicy Texas style chicken did.  Big Time.  Love that smokey chipotle flavor.  I adapted an oven-fried chicken recipe from Bon Appetit, and cut it in half, which was enough for the two of us with left-overs.  I have given the full amount here, however. 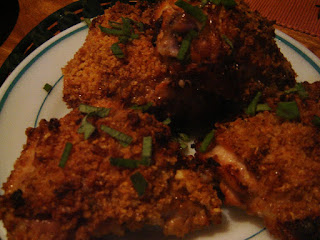 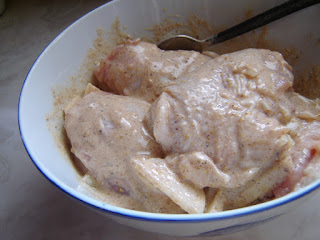 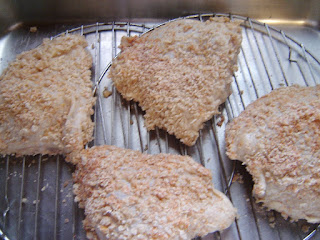 Preheat oven to 425°F. Drizzle butter over chicken. Bake until crisp, golden and cooked through, about 50 minutes. Sprinkle the oregano over and serve warm or at room temperature. 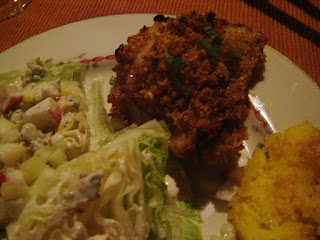 Just wonderful.  I served it with fried polenta and a large salad, which you may or may not recognize from The Smitten Kitchen's Iceberg stack with blue cheese and radishes.  Still can't believe I actually went out and bought a head of iceberg lettuce.  Worth it though. 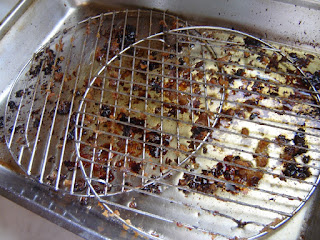 NOTES:
As you may have noticed, this is not a one dish, pot or bowl meal.  It totally makes a mess.  So, I really appreciated the lovely smokey, spicy flavors even more the following day, when I was not hot and tired.  I keep telling myself we need an air conditioner in the kitchen.  Truly

I will  be submitting this post to the link-up at Simona's Novel Food, which I have been meaning to join for some time, and to  Beth Fish's Weekend Cooking.  You might read a book, get inspired to cook and join us.  Or, just check out those sites.

That looks so good! Adding it to my "to make" list!

This looks absolutely amazing! I love really good fried chicken and haven't had any in a long time. It's even better that it's oven fried. I haven't read any of Albert's mysteries in awhile though I have read some of her books with her husband under the Robin Paige name. This looks like a good book and a good meal!

How lovely! And that chicken looks really, really good. I have read several of Susan Wittig Albert's books and also had her appear at the library in Austin. Her books are always interesting and a good intro to our area of the world. Thanks for sharing this!

I like Albert's books too. I haven't read one in a while ... must get back to her. Anyway, that chicken looks soooooooooo good I must give it a try. Love the idea that it's done in the oven.

That chicken looks delicious! And probably tasted even better the next day!

I'll have to look out for chipotle. Cheers from carole's Chatter

Never had fried chicken like that. I'm going to a house warming in a couple of week and I was asked to bring fried chicken. I think I will change it up with this recipe.

Oh boy, this chicken looks like something my sons would really love.

An interesting book and a great recipe, which I will definitely try. Thank you so much for contributing to Novel Food.