Our current (October-November) Cook the Books Club selection, The Hundred-Foot Journey, a novel by Richard C. Morais, was titled for the very short distance between two eating establishments in his story, French and Indian, though the journey between cultures is much longer.

An Indian family flee their home and restaurant in Mumbai, after the mother's tragic death in a riot, though not without first selling their property and making that escape with some solid cash.  After a brief unhappy stay in England, they move again, this time (after some driving around Europe, looking for a future home, in three second-hand Mercedes), they finally settle in the little French mountain village of Lumière.

There, right across the street from a well-known (to epicures) classic French Inn and Restaurant, run by a snooty, unhappy woman, though an excellent chef, Papa decides to open a colorful, noisy, family style Indian Restaurant, Maison Mumbai  You can just imagine the fire-works.  Literally in the case of the troop from India, with classic Hindustani music blaring out over speakers in the garden.  Their new neighbor is not thrilled, to say the least.


I enjoyed the story up until just after this point, when Madame Mallory, unbelievably, after nearly causing the death of their talented young, son, actually coerces the family into allowing that son to work for her, instead of for his own family.  What potential is lost as Hassan's rich Indian culinary heritage is abandoned, and the book degenerates into your typical chef on his way up, going from one apprenticeship to another, finally opening a French restaurant and three Michelin stars plot. Dragging along at that, any momentum totally lost. 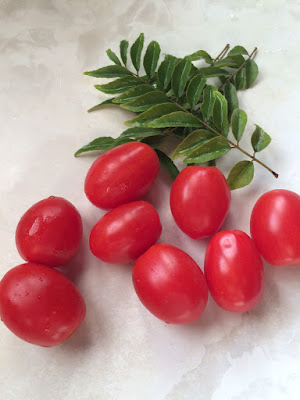 I had hoped we would hear about how Hassan might develop creatively, using the flavors and cuisine of his own country, perhaps making a success of their family business, allowing the French to experience a fabulous taste of India.  But nooo.  Madame Mallory tells them:


"I want Hassan to come work in my kitchen.  I will teach him French cooking.  I will give him a proper education.....This is a chance for your son to become a truly great French chef, a man of taste, a proper artist, not just some curry cook working in an Indian bistro."

Of all the arrogance, as if French cooking were the epitome, the end and beginning of taste.  In my opinion, Indian food beats or is more than equal to anything else, hands down.  So there. 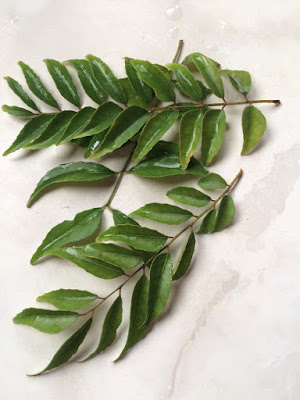 As you may have guessed, I did not care for the book, overall.  Though the beginning, in seaside Mumbai, was fine, especially the descriptions of food, their restaurant, and characters, such as Papa, boisterous and Falstaffian, lost too soon in the story.  That would be up to approximately 40 pages in.  Then the account of the family settling in Lumière was entertaining, with an over-the-top wicked Mallory.  Morais would have done better to keep his story in the French Alps, and further explore relationships between the two cultures, represented by a gifted young Indian man and a classically trained French chef, whose character thankfully changes for the better. 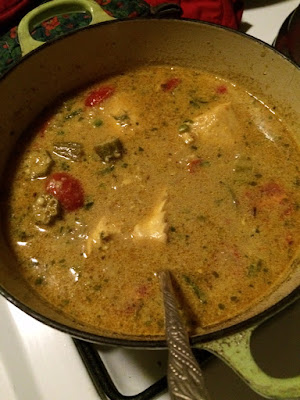 Thus, my cooking inspiration for our Club entry came from that first period in India, where Hassan muses:


"I suspect my destiny was written from the very start, for my first sensation of life was the smell of machli ka salan, a spicy fish curry, rising through the floorboards to the cot in my parents' room above the restaurant."

And the end, when Hassan walking home from his just three-starred restaurant, passes a new Indian eatery in Paris and smells that particular fish stew his grandmother made all those years ago:


"But somewhere down the middle of the sloping lane of Rue Mouffetard, I stopped in my tracks.  I was not quite sure at first, not quite trusting my senses.  I again sniffed the moist midnight air.  Could it be?  But there it was, the unmistakable aroma of my youth, joyously coming down a cobblestone side passage to greet me, the smell of machli ka salan, the fish curry of home, from so long ago. ....And I was filled with an ache that hurt almost to breaking.  A sense of loss and longing, for Mummy and India... and for the family I never had, sacrificed on the altar of my ambition."

I occasionally prepare curries, always with trepidation, as I know my own limitations with the complex cooking of India.  But, figure I can at least be inspired by that great tradition, and gain from the attempt.

This one, is a recipe I found online and tinkered with, for that infamous fish curry. 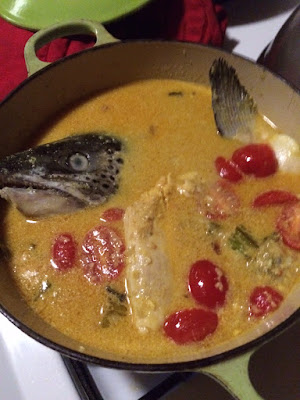 I used Hawaiian opah or moonfish, but you can use any firm white fleshed fish for the curry
that is locally available. I added the fish head to my curry for more depth of flavor and richness.  You can omit it or remove it before serving.  I removed mine.  He's rather cute though, don't you think? 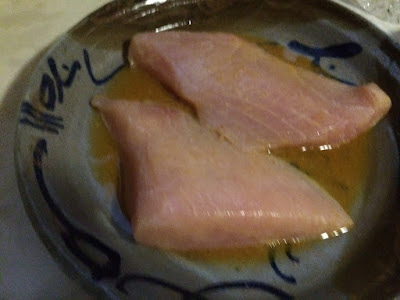 Heat oil in a deep pan. Fry onions till golden brown. Remove from oil and add to a blender or food processor with ginger, garlic and yogurt. Make a smooth paste.

Add the curry leaves and fry til crispy, lift out and drain on paper towel, then set aside.  Add the dry spices, green cardamom seeds, cloves, bay leaf, remaining turmeric, crushed curry leaves (stems removed) and chili powder to the oil in pan. Sauté for 2 minutes or till the spices no longer smell raw.

Add the yogurt paste to the pan. Keep cooking for 7-8 minutes or till the masala separates from oil.

Cook like this uncovered for 5 minutes or till the fish changes color. Add 1+1/2 cups of water, cover the pan, reduce heat to minimum. Let the broth simmer for another 5-7 minutes. 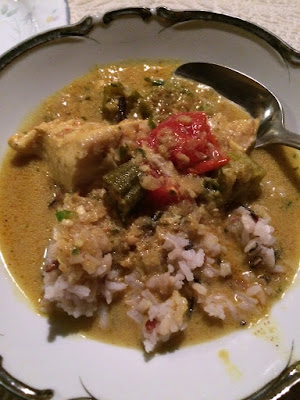 I served the stew with a side of cucumber salad in kefir dressing, some salted lemon preserve and guava chutney.  The flavors of India come through so enticingly in this dish, it's just incredible. Love a good spicy curry.  Will share with Beth Fish and her Weekend Cooking link-up.
Posted by Claudia at 9:39 PM

I'm not a fish lover, but that looks good!

I love a good curry, though I've never made one with fish. This looks good. I've been meaning to read this book, but haven't yet. I think I would have been frustrated by exactly the same things you mentioned: why did he have to become a *French* chef? Grrrr.

I liked this movie and have been meaning to read the book. Your curry looks delicious.

This sounds interesting and while I don't love fish I love all the seasoning in the recipe. I think I'd be frustrated as well with the switch to the more standard chef climbing the ladder premise.

I just couldn't get into the book. I would've like to participate in cook the books but like I said, I lost momentum with that book. Now I love everything that you have prepared here, looks delicious!

I have heard the same thing about the book from others, so I probably won't read it.

I find that I liked the movie more than I am liking the book so far. ;-)

Machli ka salan was what I was going to make but you beat me to it. :-) Your curry looks wonderful especially with the local opah--one of my favorite fish for curries and soups as its firmness lends itself so well.

Thanks for joining in Claudia--I am glad you could find something so delicious to make even though you didn't care for the book.

Now you need to see the movie - it's even better than the book.

I very much agree with your reaction to the book and liked the hollywoodized movie better. That is one hell of a curry, fish heads scare me but like fish stews lol!

I thought the book was pretty "meh" too. The stew looks great!

I thought the book was well-written, but a bit depressing, perhaps because Hassan really never had an epiphany of creativity like you point out. I did like the film much better. Great dish!!!!!

Great post. I was blessed to visit Oahu and Maui many years ago and I still long for the Moonfish that I ate nearly every single meal.

I liked the movie better than the book, but hey, it was Helen Miren after all.. Enjoyed reading your recipe as well

My review of the book is along your lines. I wish the story had remained in the beautiful French Alps and taken a less cliche' turn. That's a beautiful fish curry you made. I am also still uncertain when I make a curry, but the result always makes me glad I pushed aside my fears.