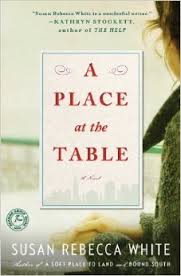 I've had quite a Holiday blog break, finally getting back for our current Cook the Books Club selection,  A Place at the Table by Susan Rebecca White, which is the blended story of three main characters who live through forms of discrimination or betrayal.  Beginning with Alice and James, sister and brother who live in rural North Carolina; then Bobby from Georgia who is coming to terms with his sexuality; and Amelia, going through divorce and the discovery of her true ethnic heritage.  All three find friendship and careers through cooking.

Some of the book is engagingly written, and holds our interest for a time, however the plot stumbles as the various characters' trajectories become muddled in the overall story, sometimes stretching credulity.  Also, my opinion here, some of it was just offensive.

I think it goes without saying (or should) that compassion is important, that unkindness toward, and discrimination against homosexuals or anyone else is certainly wrong, however, including an accurate picture, or at least a hint, of causative background would be more honest.  Less of the "he made pink cupcakes" type references.  Unfortunately, the vast majority of authors, both in fiction and non-fiction, have adopted a PC point of view, misunderstanding the dynamics of homosexuality - at the root -  which in most cases is reaction to early sexual abuse.  We are meant to believe an inclination is just present at birth, which theory does a real disservice to those countless numbers, and going up every year, of women and children who are physically and or sexually abused, usually by someone close, though often in settings such as camp or day care.  A truth which powerful lobbies have shoved right under the rug of psychiatric jargon. According to Dr. Peter Breggin, in Toxic Psychiatry:


"A large proportion of sexual victimization takes place in infancy, often striking two year olds, and thus a great deal of it falls into the mental darkness of childhood amnesia.  Even when recalled it may not be reported."

Well, enough of that, and I do realize we're going against the flow here.  Not my favorite book, but as far as meal inspiration, I did enjoy White's descriptions of Cafe Andres, a fictional New York City restaurant featured in the lives of her various characters, and was caught by the mention of one specialty of Bobby's, duck with green olives.  No real description however, other than that.

Being as I do love duck, a bit of research led me to Duck Purloo (pronounced per-low), also spelled perloo and sometimes called pilau, a favorite in the Low Country of South Carolina similar to jambalaya or paella, with serious African and Caribbean influences at work in its creation. 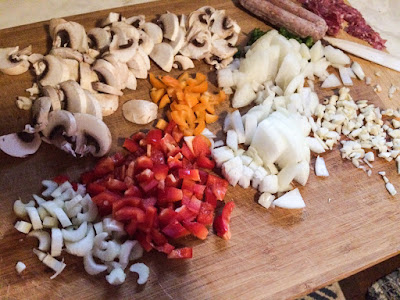 Even though Alice and James were from North Carolina, and Bobby from Georgia, I figured this would be representative of the Southern cooking featured at Cafe Andres.  Purloo is a dish which lends itself to endless improvisation with ingredients, in that it includes rice, vegetables, meat, poultry, or various shellfish, sometimes shrimp and smoked sausage.  Mine, of course, had the duck and I added olives along with various vegetables.  A total improv, though based loosely on the recipe in Gourmet Today. 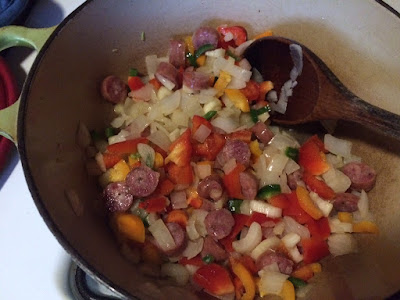 As we had a lovely roasted duck on Sunday (well at least I thought it was, Bob not being the world's biggest duck lover), that left me with plenty for this recipe, and considerably shortened the cooking time. 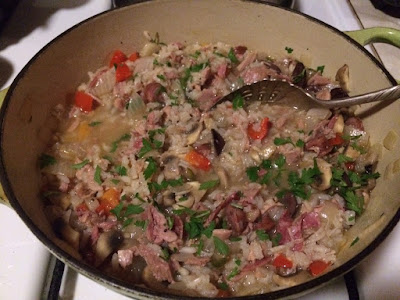 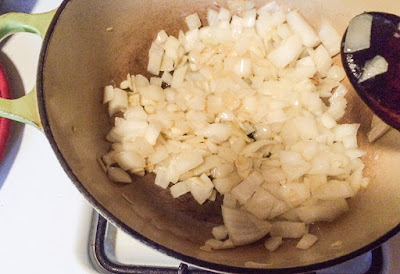 Have all your ingredients assembled, and begin by sauteing the onions in 2 tablespoons of the duck fat, then add the garlic and remaining vegetables, sausages, and salami, stirring and frying, ending with another tablespoon of fat and the mushrooms.   Add in the broth, shredded duck, olives, and marjoram.  Stir in the rice, and bring to a rolling boil over high heat, then reduce and simmer, covered, stirring occasionally, until rice is tender and moist but not soggy, about 20 minutes.  Remove from heat and let stand, covered, for 15 minutes.  Stir in parsley, taste and add salt and pepper.  Served it up with a lovely glass of my Lemon Mead. 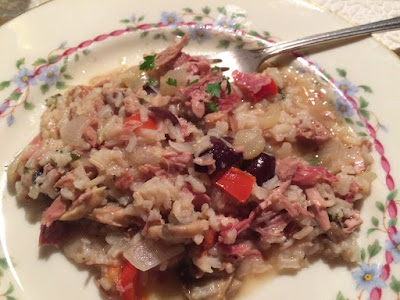 That was one tasty dish, soooo good!  And I'll be doing it again.  Soon.  Will also share on Beth Fish Read's Weekend Cooking.  Which is all about what we've cooked up, and books too. If you are posting anything related to food, cookbook reviews, novel or non-fiction book reviews, recipes, movie reviews, etc., head on over. Or, if you want to just read food related posts, and what some interesting people have to say about food.

The duck recipe looks awesome! A Place at the Table sounds like it would be good book club choice because I bet it would prompt some great conversations.

I am very impressed with your Duck Purloo. I've avoided the dish because it always seemed so difficult. Your pictures make me believe I can do it.

I have never heard of Duck Purloo before! Thank you for sharing your recipe from your reading. I'm glad that you enjoyed it.

I'm getting ready to read this book. I haven't heard of Duck Purloo before, but it looks yummy.

Great choice. I don't even remember that being mentioned in the book, but then I may have overlooked it because my hubby is not a duck lover either. I, on the other hand, think this recipe sounds delicious!!

The food descriptions from Cafe Andres were my favorite parts of the book too. It made me want to go there and eat everything including the duck with green olives. I don't know what Bobby had in mind, but your Duck Purloo (love the name--it sounds so musical!) ;-) looks amazing. What a fun dish and perfect for the book.

Great dish! And I agree 100% with your assessment of the book & society in general!

You always choose such interesting recipes, Claudia! I didn't know this dish, so thank you for introducing us to it.

I had never heard of this dish and have not been able to get my husband to eat duck -- this will be a first.