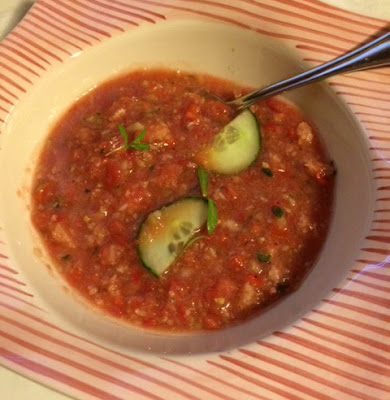 You Say Tomato, I Say Tomahto!

We're rockin' out with tomatoes this week at IHCC and chef Curtis Stone.  The weather, being so muggy and hot, has been inspiring me to more salads and less cooking.  A Gazpacho sounded quite cool and refreshing, and it was, it is!  This recipe may be found on his web site and in his book, Relaxed Cooking, as well. 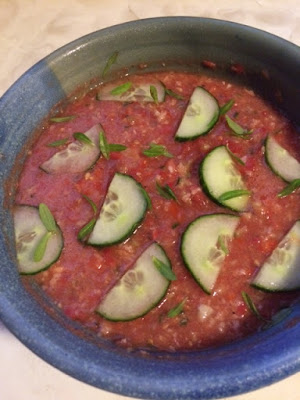 Serves 6
The soup can be made 1 day ahead, covered and refrigerated.

1.  In a large bowl, combine the first 11 ingredients. Cover and refrigerate for 12 hours.
2.  Transfer the marinated ingredients to a food processor or blender and blitz until smooth. Refrigerate the soup until it is very cold. Season the soup to taste with salt and pepper.
3.   Ladle the chilled soup into chilled bowls and garnish with the finely diced cucumbers, bell peppers, and tomatoes. Drizzle with extra-virgin olive oil and serve. 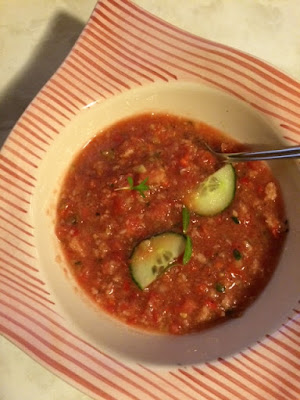 I simplified by combining all the ingredients (except some cucumber slices and the olive oil) in my blender, and just processing til nicely minced, leaving it slightly chunky, which I prefer to a smooth gazpacho.  Then refrigerated til well chilled, adding a few ice cubes before serving.  Also, I used tarragon vinegar instead of red wine vinegar, and sprinkled some fresh tarragon on to garnish.

Will share the tomatoey coolness at Deb's Souper (Soup, Salad & Sammies) Sundays at Kahakai Kitchen as well as at IHCC ( I Heart Cooking Clubs).  Check out lots of yummo recipes.
Posted by Claudia at 10:52 PM

Perfect for this hot hot summer.

I love a good gazpacho and I really like your addition of the tarragon oil and fresh tarragon--it's one of my favorite herbs.

Thanks for sharing it with Souper Sundays this week!

Perfect soup for a hot day!

I oven roasted some of our tomatoes yesterday just to get them in the freezer. Wish I had seen this, Claudia!

Yum! I love tomatoes but have never had this type of soup.

just the right soup for those summer temperatures here in Germany

This is really a great way to bring out the sweet and tangy taste of fresh tomatoes. Perfect soup for a hot summer day!

I hear you about cooking in this hot weather. That soup is the perfect antidote.

This makes a refreshing soup in this hot weather!

Gazpacho is the perfect, and delicious, way to cope with the dog days of summer. You've reminded me that I need to make one while the tomatoes are at their peak. Looks refreshing and flavorful!