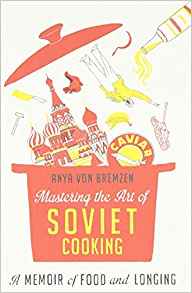 
Anya held a secret fixation with Lenin, despite her mother's anti-Soviet hatred of all he stood for.  However as a child she considered herself a "Mature Socialist."  That whole story is the funniest bit in her memoir.  At the age of 9-10 years old, a "proper black marketeer" she is bartering bits of Juicy Fruit gum and M&M's for money, services and favors, and eating at a nice restaurant from her proceeds, instead of attending a "silly ballet" class.  She wasn't actually in favor of emigrating, but did agree to it out of love for her mother. 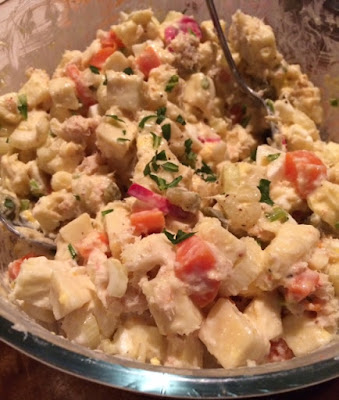 What would have made the reading flow better, or easier, would be more translating of Russian words.  Why leave so many scattered here and there for us to stumble over?  Bits lost without translation.  As in: "A dewy-cheeked Kyrgyz Eve called out..."  (p.277) and what is a "ritzy Petrus" when it's at home?  Or, "old, noble Barolos"?    A dictionary in back might have been a good idea.  Minor nit-picking. 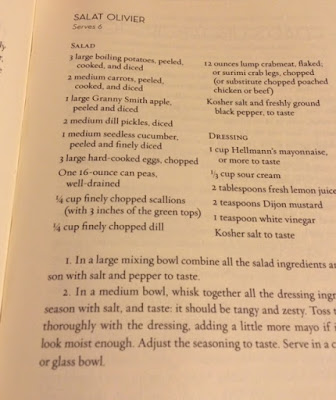 There was so much I would like to try as far as food, especially the Kulebiaka and the Georgian Walnut-sauced Chicken, but will save those special occasion dishes for when we have more people at our table.  What I did settle on was the Soviet style Potato Salad, Salat Olivier.  Though just substituting our own breadfruit - very potato-like, for the potatoes, celery instead of cucumber, and added some radish. Also left out the apple, as that was not traditional anyway, but an addition by Anya's mother. 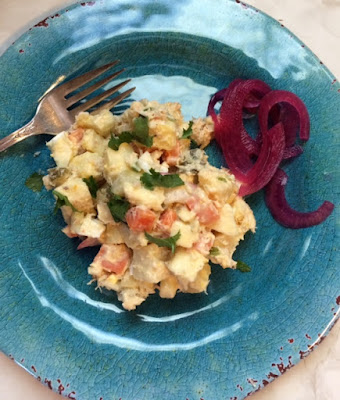 This version of potato salad is not all that far off from what I'm accustomed to.  The main difference is probably adding crab meat and cooking the carrots.  We both enjoyed our Russian Salad, and I'm linking it up to the August Foodies Read Challenge and with  Beth Fish Reads for her Weekend Cooking event,  in addition to our Cook The Books  Round-up.  Please do visit for good reading suggestions, and lots of yummy food.

The events she recounts are indeed horrific and on a scale that are hard to grasp. As you say, complete disregard for the value of human life, which is a hallmark of all dictatorships, here magnified by the sheer size of the country and its people. I'd love to taste your Salat Olivier made with breadfruit! Thank you so much for your contribution to this edition of Cook the Books :)

I had similar feelings about the book--not just the Russian words but all of the names and then the different nicknames on top of that made especially the first half drier and harder to get through for me.

I love that you made the Salat Oliver with breadfruit. I definitely need to try it. ;-)

I thought seriously about tracking down that walnut chicken, too. As you say, "For another time." I was a bit perplexed about her deep nostalgia for such a horrific dictatorship. I'm sure her idolization of Lenin was meant ironically, but still...

I thought it was a difficult book from start to finish but it did offer some great food inspiration and the recipe I used for the Borshch was amazing.

What an interesting read! I love books like this and traditional recipes, particularly with additions made by family members- sounds fun but sobering.

I so love you post, I am glad I was not alone in dwelving more into the political aspects of it in writing! For sure the book could use some tweaks too but it was great. I also adored the bit about the bartering bits of Juicy Fruit gum and M&M :-) Yeah that walnut chicken sounds amazing, I have had similar in Persian restaurants I wonder if it is the dame. And I came so close to making this salat olivier...looks so awesome.

Yes, we forget that old axiom: "Those who cannot remember the past are condemned to repeat it.'

I borrowed the book from the library, but didn't even get it started. After reading your review I'm wondering if I should still read it or not.

I tried to read this but just couldn't get into it. Interesting premise but something was off for me. Cheers

I love your photo of the potato salad. We live in a Russian community and I see that exact looking salad in the restaurants and deli's .. The book sounds interesting, It is always fascinating to me to read about life in other parts of the world-

HOw frustrating that not all the terms were translated. Still, I'd be curious about the recipes. My grandfather was born in Russia; but because he escaped during the revolution, I'm sure the dishes I ate as a child were not the same as those in this book.

I've heard so many good things about this book, I enjoyed your review.