Mapo Tofu and a Memoir of Eating in China 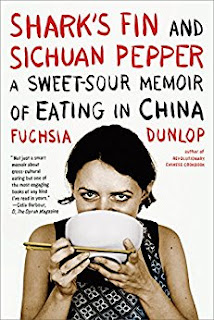 I have thoroughly enjoyed reading our latest pick for Cook the Books Club - Shark's Fin and Sichuan Pepper, a Sweet-Sour Memoir of Eating in China, by Fuchsia Dunlop, this round hosted by fellow Hawaii resident, Deb of Kahakai Kitchen  Dunlop writes a mostly delicious, sometimes revolting, entertaining, well researched and fascinating account of the food, culture and the peoples of that humongous country, mixed in with just enough history to punctuate her tale.

Fuchsia starts out as a young student of the Chinese language and culture, then embarks upon learning to cook Chinese as well, in the city of Chengdu, Sichuan province.  There she attends the premier Sichuan culinary school as their first foreign student, a woman at that, in a class of about 50 young Chinese men.

Fuchsia continued to travel widely in China and recounts her many adventures over the years with wit, humor and style. She began what became a long term odyssey by deciding to eat whatever was going, and stuck by that, consuming what a majority of us would consider truly horrifying food.  Not just every bit of an animal, but including the odd critter and bug in the mix; some of which may have started out as frugality in hard times, but have come to be considered exotic and expensive delicacies for the wealthy.  Her title is evocative in that sense - sweet-sour.
Not to gross you all out, but a good friend (who hunts and fishes) just headed off to Alaska for the summer.  I told him to bring me back a bear's paw, if he was forced to kill one that is.  Sometimes guys do hunt bear, but he said only if attacked.  For culinary purposes, mind you, as Ms. Dunlop does have a recipe in the book.  Another friend who hunts in Alaska loves bear meat.  And as I would think eating all or most of the animal is more respectful of the creature you have killed, I'll mention it to him as well. :) 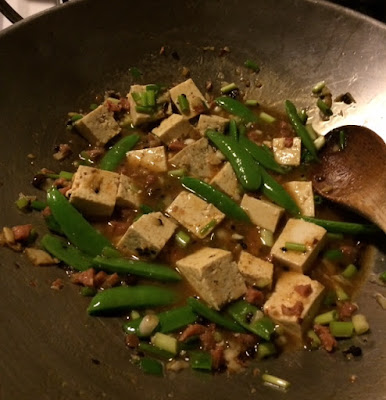 Note: regarding pollution, endangered species, and cruelty - Dunlop is engaged in reportage here, not condoning everything she encounters; some of which she speaks out against and regrets.  This is the reality of not just China, but with our own and many other countries' treatment of animals in factory conditions, and the pollution of our grain and vegetable crops with pesticides.  We all need to take a stand however, and it would have been far better for her to take one where endangered species or cruelty were involved.  More important than a pledge to eat anything and everything.  This is a memoir, so honest reporting of a mistake made earlier in her life should have been called that - a mistake.  We all have made them, sadly. 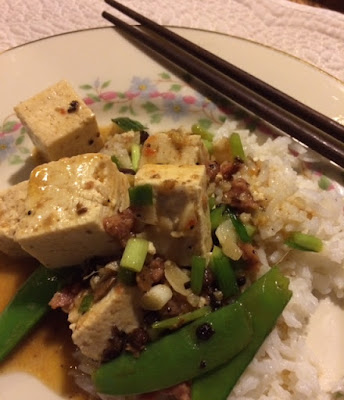 Her forays into various little eateries and restaurants to watch and learn in the kitchens, as a supplement to cooking school, were instructive.  Dunlop used a combination technique of shock (strange foreign woman speaking Chinese) and charm (what she termed her "charm offensive") to get access.  In one little eatery Fuchsia demonstrated her method of making Mapo Tofu to get the chef's approval.  Now that is a dish I do love, and I wanted to try an authentic Sichuan version.  Thus my recipe choice for this round of Cook the Books.

The name translates from the Chinese to Pock-Marked Mother Chen's Bean Curd, and according to Fuchsia's remarks in her cookbook, Land of Plenty, the recipe "is named after the smallpox-scarred wife of a Quing Dynasty restaurateur, who delighted passing laborers with her hearty braised tofu.  It's one of the most famous Sichuan dishes and epitomizes Sichuan's culinary culture, with its fiery peasant cooking," 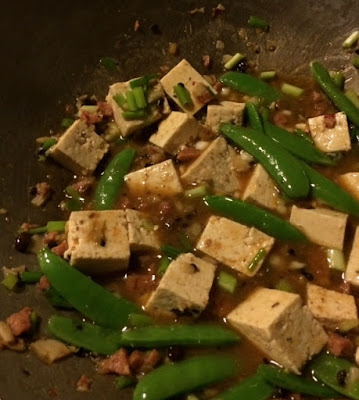 Dunlop calls for ground beef in her recipe, which she says, though traditional in this dish, is unusual in Sichuan cooking, where pork is more common.  I used minced pork sausage, which is an alternative, as is omitting meat altogether.  Here it is from the above-mentioned book, which I've checked out of the library, and may now HAVE to buy. 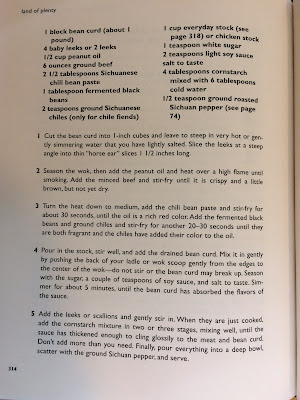 This is indeed a spicier version than what I've had before, as expected, with all her discussion of chili laced Sichuanese food, though I did cut down the heat element for our own tastes.  I also added some whole pea pods for a very satisfying and flavorful dish.  Doesn't really need anything else but some plain rice to serve it over. 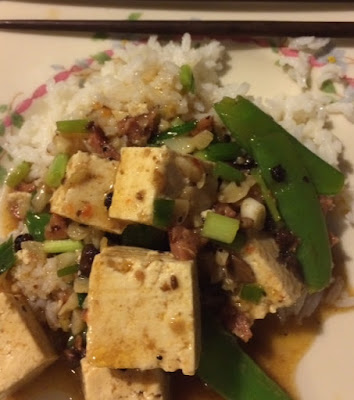 This post will be linked to our Cook the Books Club Round-up for the April-May edition, to Beth Fish Reads for her Weekend Cooking event, and to the May Foodies Read Challenge.  Check them all out for lots of delicious food, and some good reading suggestions.
Posted by Claudia at 10:36 AM

I'm glad that you enjoyed the book. My husband has gone bear hunting, prior to any knowledge I had of bear claw, so it did get wasted. The meat, however, is very tasty....a little sweeter than the red meat that we are used to eating. It served us very well for over a year. Ground pork was a good alternative for the ground beef in this recipe.

I'm glad you enjoyed the book! I was going to do a vegetarian mapo tofu but yours looks so good, I may have to cook something else. The price of procrastination. ;-)
Mahalo for your entry!

Being a vegetarian, this book is definitely not for me- tofu -ok Bear?? No

You and I agree about how interesting that book was. I read it a few years ago, and then my culinary book club read it, but if I remember right, the other members didn't like the book as well as I did. I have never tried any of her recipes.

I live in an area of the country with lots of hunters. I haven't ever eaten bear, but I've eaten other game. I had no idea that a bear claw could be cooked.

I can't imagine eating a claw either, which would be bone, I'd imagine. The paw, folks. Which is also kind of hard to picture.

Sounds like a fascinating book, but I did wince at the mention of bear claw. Tofu recipe, on the other hand, looks delicious. :)

Good one! Have a great week. Cheers from Carole's Chatter

While I'm not a fan of tofu, this preparation looks great. As to the book I had my ins and outs with it. The recipes were totally to the good

My husband shoots (pheasant and mallard, mostly) so I am not absolutely opposed to the idea of hunting, but the endangered species thing really got me with this book. I do love mapo dofu though.

Great dish, Claudia. I would like to try it with the ground beef, too. (I'm glad you didn't present a bear paw!)

Wow, that is one hot recipe! Great choice: it is also one that I would like to try making one day and when I do I will also decrease the heat.