My Own Spicy Soup for Sourdough 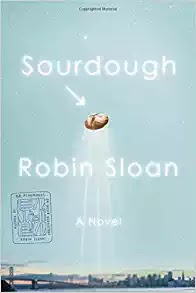 Our latest Cook the Books Club read has been Sourdough by Robin Sloan.  And what a fun, often wacky, and very entertaining one it has been!  I loved this book, even reading it the second time, picked up stuff missed on the earlier go round.

Basically, Lois, a young computer nerd, software programmer, recently graduated, is working at a moderately interesting job, until being recruited at a much higher salary.  Lois moves from her home in the Midwest, to a new job in San Francisco.  She becomes absorbed into the Silicone Valley culture at a large robotics corporation, is soon feeling dysfunctional, over worked and unhealthy, with a permanently clenched stomach.

Then Lois encounters a pair of strange foreign, "fast food" marketers, near her apartment, who feature 2 items on their delivery menu.  The Spicy Soup and a Spicy Sandwich, or the Combo (the Double Spicy). Near magical items, as it turns out, which restore her body and mind.

Lois ends up ordering in the Double Spicy on a daily basis, when of course, as things do, change enters the picture. The little business comes to a halt.  The young men have to leave the country, due to visa problems.   For food, along with most of the other employees, she is now relying on "Slurry" a "nutritive gel manufactured by an eponymous company even newer than General Dexterity (her company).  Dispensed in waxy green Tetra Paks it had the consistency of a thick milkshake.  It was nutritionally complete and rich with probiotics.  It was fully dystopian."  And questionable for sure. 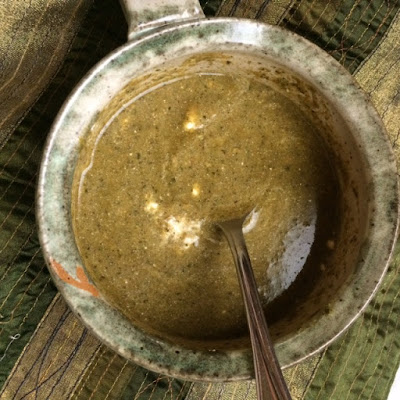 The plot thickens however, as the Spicy guys, on their way out of town stop by with a gift. Some sourdough starter.  With magical properties. They stay long enough to show her how to feed the culture.   From the Publishers:
"She must keep it alive, they tell her―feed it daily, play it music, and learn to bake with it.

Lois is no baker, but she could use a roommate, even if it is a needy colony of microorganisms. Soon, not only is she eating her own homemade bread, she’s providing loaves daily to the General Dexterity cafeteria. The company chef urges her to take her product to the farmer’s market, and a whole new world opens up.

When Lois comes before the jury that decides who sells what at Bay Area markets, she encounters a close-knit club with no appetite for new members. But then, an alternative emerges: a secret market that aims to fuse food and technology. But who are these people, exactly?"

Things start to get really strange after this. You have to read the book and discover for yourself. There are more adventures than can be recounted here.  And just a note on sourdough starters:  after killing so many, I have not given up.  I did what Lois finally did, and ordered one from King Arthur Flours - it's on the way! 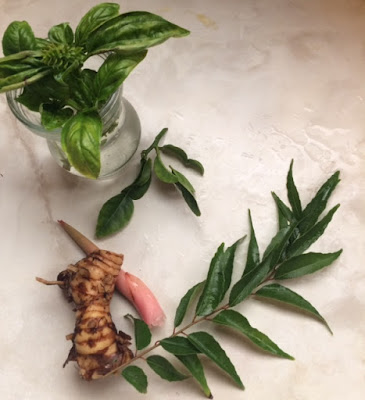 Lois writes to her friends, who have gone back to Europe, that she wants to make her own spicy soup. I was intrigued by that idea, of making my own Spicy Soup, using tangy ingredients from our garden. Maybe kaffir lime leaves, galangal ginger, curry leaves and basil, along with others of the usual suspects: garlic, onion, chili peppers. I started by tossing spices into a pot to temper, then added ghee and sauteed, an onion, tossed in garlic, then the leafy herbs and galangal, all minced well. Now some veggies went in: a carrot, shitake mushrooms, and later in the game, sweet potato greens and Pacific spinach (you could use your favorite greens).  Just toss a few minutes over medium heat. Finally added in my homemade stock, and simmered until all vegetables were done.  I added about a cup of coconut cream, salt, pepper. More chili. Got to Taste. Taste Taste. This was a culinary experiment with a theme. 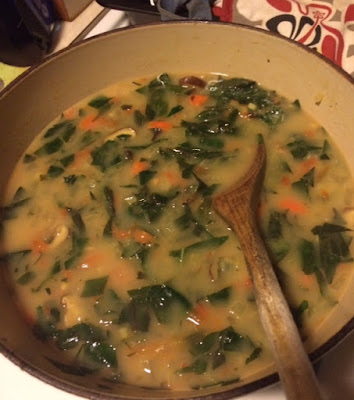 This worked well, and tasted fine, but adjustments still needed to be made.  It wasn't quite there.  I decided to blend it smooth, after adding some tempered chili powder and smoked paprika (an homage to the imaginary Mazg people, maybe Hungarian relatives?). Very good now, quite delicious in fact.  Great with a scoop of sour cream.  I served it with a risotto of Emperor's rice and a lovely fresh salad.  That black rice risotto is a a whole other story.  What a great discovery!  I made the Emperor's mushroom risotto in my slow cooker, which was a breeze, and so flavorful. 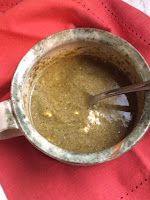 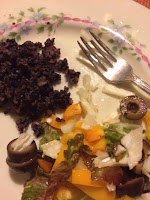 Luckily. there was enough for a bowl of some left-over soup, which I had cold, with sour cream stirred in.  We have been having such muggy, hot weather.  This was my inspired meal for our current Cook the Books Club pick, Sourdough.  Also will link up with Beth Fish Reads for her Weekend Cooking event and with Heather for the September Foodies Read Challenge, as well as Simona's Novel Food, latest edition.  Do visit everyone and check out some excellent food and books.
Posted by Claudia at 1:55 PM

All the "Sourdough" blog posts have been great, especially your spicy soup experiment. I loved the book -- will even read it again some time.

"The Spicy Guys"
I love how you describe them. I also love that you tried to recreate the soup. I was hoping someone would do that! Glad you liked the book.

I thought SOURDOUGH was a fun read -- thank goodness we don't really have to play music to our sourdough starters. I hope you post about your experiences with the King Arthur starter. I've killed a ton of starters in my day, but maybe KAF is the trick????

The soup looks amazing and the book sounds like a good read. I'll have to look for it.. thanks

Such a fun book. I am late to the posting party as usual but my Double Spicy soup and sandwich will be up tomorrow. ;-) I love your soup from your garden bounty--it looks so tasty with all of the veggies and flavor additions and that scoop of sour cream. Yum!

I'll have to look into this. Thanks Cheers from Carole's chatter

How creative of you to go with the soup rather than the bread. This soup sounds delicious and it's even better because you were able to make it with bounty from your garden.

I love the flavor notes you put in this soup! It was so intriguing to read of this magical soup and the brothers without any solid idea of what the soup actually was. Great inspiration!

Thanks for joining me in not making sourdough starter/bread! I just love spicy and using garden ingredients makes it even more appealing. Honestly, I loved the story thread about the brothers and their illegal kitchen .. cathy

I wish I could easily pick those intriguing ingredients and make a soup like you did: I would love to get a bowl. Great choice of recipe!

And thank you for contributing to Novel Food :)

Phil in the Kitchen said...

I could see myself ordering the Double Spicy on a daily basis and your soup sounds like just my kind of thing. That sounds like a fascinating book.

it was a wonderful chance to visit this kind of site and I am happy to know. thank you so much for giving us a chance to have this opportunity..