Pasta ala Norma for Auntie Poldi 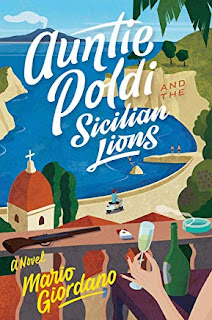 I just finished the debut novel of a new series, Auntie Poldi and the Sicilian Lions, by Mario Giordano, and I did enjoy it, despite a few reservations.  Auntie is a definitely a character, albeit one prone to occasionally wavering somewhere on the edges of wonderland.

From the Library Journal review:
"There is a new amateur sleuth in town. Auntie Poldi, a 60-year-old Bavarian widow, decides to retire to Sicily and spend the rest of her days enjoying a good sea view and an abundance of Prosecco. Instead, she gets involved with investigating the death of Valentino, her handyman, and with an attractive police inspector. The characters are eccentric, bordering on over the top; the scenery is lovely; and the descriptions of food are fantastic. Poldi's nephew, an aspiring writer, lives in her attic bedroom and narrates the tale. There are some awkward pacing points in the book, which could be owing to difficulties in the translation; overall, it is a breezy mystery."

Auntie enjoys eating as well as drinking and flirting, so plenty of good food mentioned, both German and Italian, particularly Sicilian.  Poldi fixes a dish for her new Police Inspector friend, one I'd never heard of, though apparently a favorite in Sicily, Pasta ala Norma.  According to my sources, "a triumph of Mediterranean flavors, so called in honor of Vincenzo Bellini's opera "Norma". The story says that in the 19th century, Nino Martoglio, a Sicilian writer, poet and theater director, was so impressed when he first tasted this dish that he compared it to “Norma”, Bellini’s masterpiece.  And the name lasted ever since. 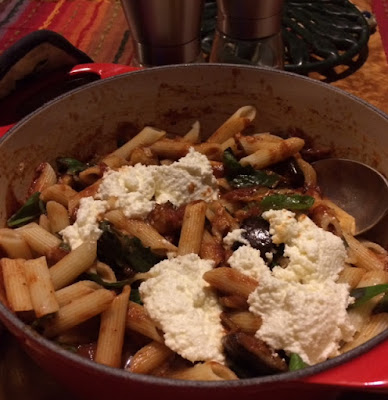 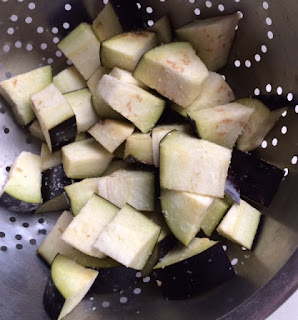 Note: I cut everything by half, for just the two of us. 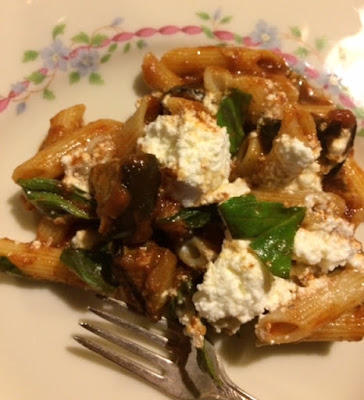 Very delicious!  We both loved it. This will be shared over at the June edition of Heather's Foodie Reads Challenge, with Simona for her Summer edition of Novel Food,and with Beth Fish Reads for her Weekend Cooking event.  Be sure to visit those sites for great food and book suggestions.

Sounds like a fun, light hearted read and the pasta looks amazing.

That pasta looks delicious==loving the eggplant--and the book sounds like fun. ;-)

I started this book but never finished it. But I should have for the recipe alone; it sounds great! Thanks for sharing it!

I made sauce this week with San Maranzo tomatoes and also crushed them.

Sounds like it has the potential to be an enjoyable cozy mystery.

Have a great week in the kitchen

Your pasta looks fantastic. I saw the Auntie Poldi book in our shop, I was wondering if it is a good read.

NOw back from my trip ... I love eggplant and am always looking for new ways to cook it. I think I might have a copy of this book; I'll have to give it a try.

I am so going to hijack the phrase "wavering on the edge of Wonderland"!!!!

I've put the book on my "to read" list - it's that opening with so much subtext that is so attractive "On her sixtieth birthday my Auntie Poldi moved to Sicily, intending to drink herself comfortably to death with a sea view. That, at least, was what we were all afraid of, but something always got in the way."

Your post reminded me that it was the first dish I tasted during my first trip to Sicily. It was quite an introduction to Sicilian food: I am glad the novel made you discover it. I have not heard of this series and will check it out. Thank you for contributing to Novel Food :)