Cuban Cooking Inspired by Next Year in Havana 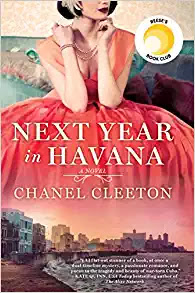 This was my first foray into Cuban cooking, and I believe into Cuban history or politics.  Next Year in Havana, by Chanel Cleeton, was an eyeopener, for me anyway.  I love reading about periods in history and about places I'm unfamiliar with, learning new things, especially when enfolded with an enjoyable, engrossing story.  Like this one.  Cleeton's novel is told from two perspectives, of those escaping the revolution and of the granddaughter, visiting Cuba for the first time, to scatter her grandmother's ashes.

From the Publisher:
"After the death of her beloved grandmother, a Cuban-American woman travels to Havana, where she discovers the roots of her identity--and unearths a family secret hidden since the revolution...

Havana, 1958. The daughter of a sugar baron, nineteen-year-old Elisa Perez is part of Cuba's high society, where she is largely sheltered from the country's growing political unrest--until she embarks on a clandestine affair with a passionate revolutionary...

Miami, 2017. Freelance writer Marisol Ferrera grew up hearing romantic stories of Cuba from her late grandmother Elisa, who was forced to flee with her family during the revolution. Elisa's last wish was for Marisol to scatter her ashes in the country of her birth.

Arriving in Havana, Marisol comes face-to-face with the contrast of Cuba's tropical, timeless beauty and its perilous political climate. When more family history comes to light and Marisol finds herself attracted to a man with secrets of his own, she'll need the lessons of her grandmother's past to help her understand the true meaning of courage." 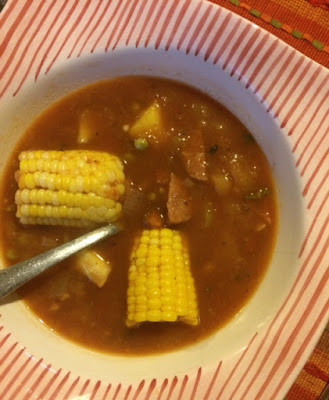 Reading this book inspired me to whip up something Cuban.  There were various foods mentioned, it's not all beans, rice, roast pork and rum. Though a Cuba Libre would go nicely with the book and before dinner!  Though I didn't use her slow cooker recipe, I found this Cuban National dish online, at Marta's blog, My Big Fat Cuban Family, and she includes some background on the dish:

"In the 1930’s, Cuban President Gerardo Machado made a proclamation that once a week everyone on the island would eat an “ajiaco” – a type of country stew made mostly with root vegetables and flavored with meat. According to my mom (a 93-year-old guajira) every restaurant, fonda, and home followed the “weekly ajiaco” rule. It was a way to use all the different root vegetables indigenous to Cuba, taking advantage of what was available in each province.

The classic ajiaco includes tasajo (salt-dried beef), which I don’t use at all. Some have chicken pieces. I favor the combination of flank steak, chicken broth and pork loin.  In other words, there are as many ways to make this tasty stew as there are Cubans in exile." 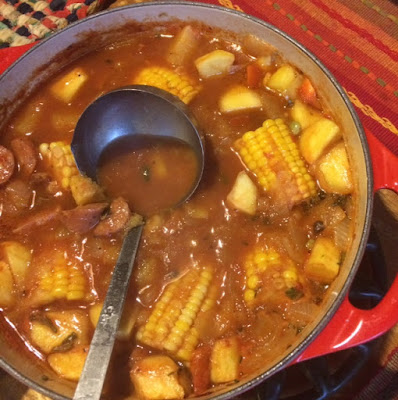 I did my own version, with homemade stock, some sausage and what was available in the market and in my garden.  For extra protein, since I eliminated most of the suggested meat items, and there were gandule beans (pigeon peas) to be harvested, about a cup of those were added too. And I made it in my cassoulet pot.  This is a basic recipe, which you can vary, as most do. 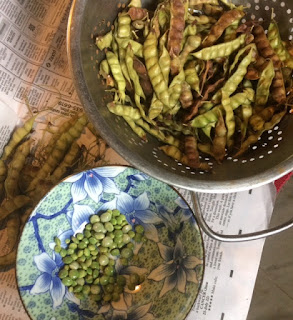 Note: I used a Kielbasa sausage, cut in pieces and     *chicken stock, instead of the jerk beef, chicken, pork     and bacon.
1 creole small hen.
½ kg of pork
87gram of bacon
National sausage (I used about 1/2 a large one)
2 corncob of fresh corn
¼ kg of yam
2 green plantains
¼ kg of taro
¼ of cassava
¼kg of sweet potato
¼kg of pumpkin
1 big onion
3 cloves of garlic
2 lemons
1 cup of tomato sauce or creole sauce
5 liters of water (as noted above I used about 4 cups stock instead)*
2 spoons of lard.
Salt to taste.

1. Chop the jerked beef, (if using) into pieces and place it to soak at least for 12 hours or from the previous night.  The following morning, drain it well and cook for 30 minutes with the hen already chopped into pieces, in a big pot with the water to medium flame.

2. After half hour, and it begins to get tender, add the pork chopped into pieces, and cook it for another 30 minutes.  Remove any scum that is formed on the surface

3. Meanwhile lightly fry onion in a pan with the lard, and the bacon, then add the national sausage and fry. Add to the soup.

4. Wash, peel and chop all the vegetables, add them to the pot with the stock and the meat, and add the corncob, and the lemon juice.

5. Cook it for 45 minutes until the clear soup gets dense. Add more salt.  If you want a thicker consistency, take out some piece of taro, pumpkin and yam, crush them and and put them again into the pot.

*I make a very flavorful stock in my pressure cooker,.from bones, and vegetable trimmings, accumulated in the freezer. Proven by the amazing taste of this stew.  Another note: you may want to cut the corn off the cobs before serving (or cooking).  It's cute, but....makes eating a bit sloppy. 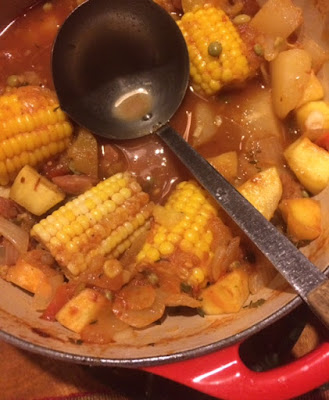 I'll share the goodness over at Heather's Foodie Reads Challenge, July edition and with Beth Fish Reads for her Weekend Cooking event.  Be sure to visit and check out some good food and books.
Posted by Claudia at 2:11 PM

I think I might enjoy this book. I like how it's structured (reminded me of Woman in the White Kimono). Stew recipes are so adaptable and I love you included your own garden offerings in this one. Have a great weekend, Claudia!

Sounds like I would enjoy this meal and this book. Thanks

The book sounds good but that Cuban dish ... sooooo yummy. I need to make it!!

Your recipe and family story are really interesting. I just looked up Chanel Cleeton and she seems to have a family background very much like some of her characters, and have written at least one other book about Cuba. Thanks for the new info!

I really don’t know much about Cuba. Cheers from Carole’s Chatter

Your dish looks absolutely fantastic. Thank you for sharing it with us! Now I need to take a look at that book....

I visited Cuba in January- found it a very interesting place. Unfortunately being a vegetarian, I found many of the recipes meat heavy. I do love black beans, white rice, and plantains