An Old Style Recipe for A Perfect Wife 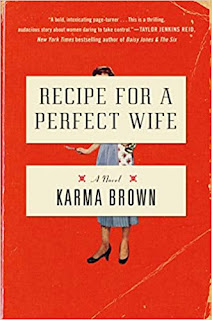 This was our August/September Cook the Books Club selection, hosted by Debra of Eliot's Eats.  And, yes you read that right. Recipe for A Perfect Wife by Karma Brown.  When I first heard the title I was dumbfounded.  What??  But, after all this is the year of strange happenings, 2020, and we are not in a time machine.  Well, Karma Brown does take us on a little time switch, moving back and forth from the 50's to present with her main characters and their lives. She takes a look at the parallels between life as a wife in both eras. I especially loved her exhumation of some old recipes, harking back to my own childhood, and my mom's and mother-in-law's cooking.  Vintage cuisine I guess you could call it. And, an enjoyable, very worthwhile read.  In spite of which, truthfully, I didn't care all that much for the modern character, Alice.  A bit on the discontented whiney side. And she lies way too much for no really good reason.

From the Publishers:
"In this captivating dual narrative novel, a modern-day woman finds inspiration in hidden notes left by her home’s previous owner, a quintessential 1950s housewife. As she discovers remarkable parallels between this woman’s life and her own, it causes her to question the foundation of her own relationship with her husband--and what it means to be a wife fighting for her place in a patriarchal society.
When Alice Hale leaves a career in publicity to become a writer and follows her husband to the New York suburbs, she is unaccustomed to filling her days alone in a big, empty house. But when she finds a vintage cookbook buried in a box in the old home's basement, she becomes captivated by the cookbook’s previous owner--1950s housewife Nellie Murdoch. As Alice cooks her way through the past, she realizes that within the cookbook’s pages Nellie left clues about her life--including a mysterious series of unsent letters penned to her mother.

Soon Alice learns that while baked Alaska and meatloaf five ways may seem harmless, Nellie's secrets may have been anything but. When Alice uncovers a more sinister--even dangerous--side to Nellie’s marriage, and has become increasingly dissatisfied with the mounting pressures in her own relationship, she begins to take control of her life and protect herself with a few secrets of her own." 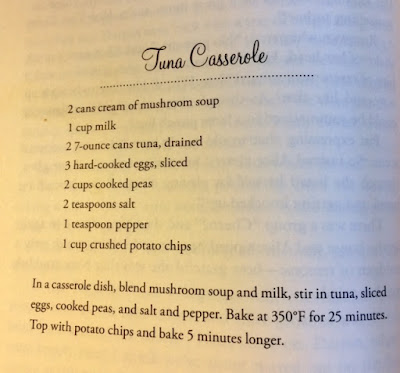 To go with the 50's theme, I chose a recipe from her book, Tuna Casserole.  Something I remember my husband saying his mother fixed, and that there were supposed to be potato chips in it.  Yes!  And there are!  I have a favorite brand of organic potato chips, Luke's, that are very good, so were perfect for this dish. 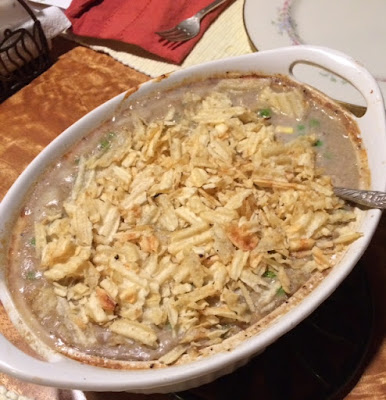 Perhaps I made too many substitutions - the mushroom soup was not the concentrated Campbells sort, so the consistency was not as thick as could be, though I did compensate by using less milk.  Still, over egg noodles, it worked out fine, and the taste was perfect. Actually, I do seem to remember the dish being called Tuna Noodle Casserole.  At any rate, a yummy trip down memory lane. 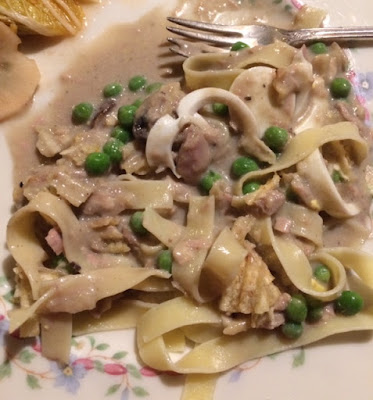 I'll be sharing this dish as my inspired contribution for our current edition of Cook the Books Club.  You have until the 30th of September if you'd like to join in.  Read the book and cook up something that inspires you from the reading.  Just hit the link for more details.  My post will also be linked to the September Foodies Read Challenge, hosted by Heather, and at Weekend Cooking, hosted by Marg the Intrepid Reader.

I am listening to this at the moment Not sure if I am going to get it finished in time to post. Also, not sure how I am going to pick a recipe from the audio. We will see.

Thanks for the review. It sounds like an interesting book that I would enjoy since I was born in the 1950's! My mom made tuna casserole all the time- it was a popular staple in our weekly menu!

That's a very retro recipe because it says "7-ounce" cans of tuna. The trend of incredible shrinking food products has decreased the standard size to 5 ounces! Seven ounce cans started disappearing around 1990, and cans have been decreasing around 1/4 ounce at a time. I don't see how they can get any smaller than 5 oz, but we'll see.

The manufacturers think we won't notice products shrinking as much as we would notice prices growing. Are we really that dumb?

Anyway, thanks for the review.

be well... mae at maefood.blogspot.com

That's so funny -- I made a tuna noodle skillet dish this week that is reminiscent of the classic tuna noodle casserole. I had forgotten about the addition of potato chips -- mine used panko and parmesan for the topping. I'll have to give the book a try too.

Nice retro recipe. There's so many casseroles that I remember fondly from my youth that used condensed milk or "Cream of" something. I wish there were a way to sub in for those canned soups. This looks like a keeper though. Tuna casserole always makes me think of years gone by. :) Thanks for participating this month. Hope you enjoyed the book.

I had scoffed at the title but you have intrigued me, I put it on my library wish list.

My husband's ex-wife made this tuna casserole and he always makes the worst faces when he mentions it. It sounds horrible to me as I think canned tuna belongs on a sandwich, not heated up.

I didn't care for Alice too much either. This, minus the eggs, was my mom's tuna casserole and the same one I still make today.

The round up is finally posted!
http://cookthebooksclub.blogspot.com/2020/10/perfect-wife-round-up.html

Thank you so much for choosing this recipe, Claudia: now I know what it looks like. I also understand the emotional impact of a recipe that brings you back to childhood. I do have a few of those as well, dishes my mother would make on special occasions. I think Nellie stole the show in the book :)