The Shooting at Chateau Rock - It Wasn't the Duck 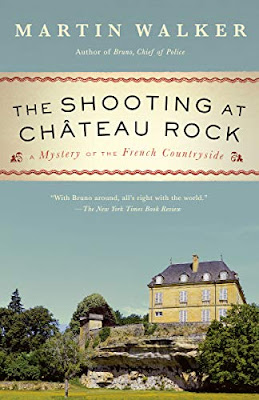 I've just finished the latest (for me anyway) of Martin Walker's Bruno, Chief of Police, series - The Shooting at Chateau Rock.  What a delightful read, an exciting storyline, evocative and full of inspiring food and drink!  A good summary here from the Publishers:

"In Walker's outstanding 13th outing for St. Denis, France, chief of police Benoît "Bruno" Courrèges (after 2019's The Body in the Castle Well), 70ish retired rock star Rod Macrae, his much younger wife, and their college-age children, Jamie and Kirsty, are spending a last summer together at their country house, Château Rock, before the parents amicably divorce. Jamie is joined by his girlfriend, Galina, a Russian oligarch's daughter. When a sheep farmer dies and his children learn that they've been disinherited, Bruno investigates. He soon suspects there's a connection between the farmer's suspicious death and Galina's father, whose shadowy shell businesses may be a cover for illicit activity throughout the Mediterranean and the E.U. Meanwhile, the obliging Bruno helps plan and prepare meals, teaches children to swim, and considers breeding his pedigree hunting dog. Francophiles will relish the evocative descriptions of the Périgord region and its cuisine."

It's like old home week, reading a new novel in Walker's series.  The familiar characters once again come to life, joined by some very interesting newcomers.  His books are always especially inspiring in the gardening, food and wine departments.  Sometimes it's just hard to know where to start. I take notes on the meals and wines. For today, we'll begin with gardening.  Bruno always spends some time caring for his fruit trees and vegetable patch.  I can use encouragement in that area. You can see below that weeds need to be pulled. 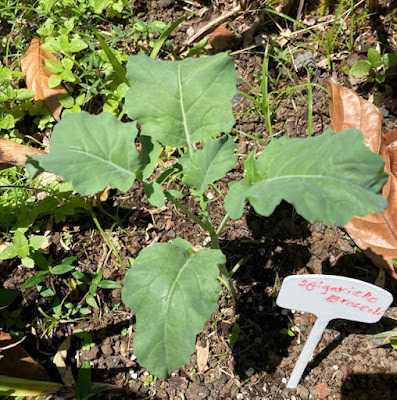 So, an introduction to my new garden addition, Spigariello Broccoli, an old Italian heirloom leafy green.  But don't let the title fool you.  Here's what The Food Republic has to say:

"The vegetable is long-stemmed with curled green leaves. When mature, it can produce edible flowers, but never florets like regular broccoli. The flavor is mild, grassy and sweet, without the characteristic bitterness of many of its cruciferous cousins. Restaurant chefs are going crazy for Spigarello; it has been featured on the menu of San Diego restaurant Table 926 and Tom Collichio’s NYC restaurant Craft. The greens can be used in a similar way to kale, so if you get your hands on this hot new variety, toss it in salads, soups and sautés." 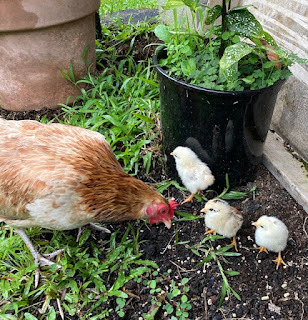 My new seedlings are doing well, having blessedly survived invading, scratching chickens, who manage to get into and wreck new starts in the vegetable beds, despite the cute little metal fences I've put up everywhere. The Spigariello plants are too new to use in cooking just yet.  Currently, the lettuce and mustard greens are bolting, but still good for salads and cooking.  I've got to get out there and re-do the beds though.
Also from the book, I wanted to try a Kir, what they were all drinking at various get-togethers.  A very simple mix, composed of Crème de Cassis splashed into white wine.  If it's into champagne, then you have Kir Royale.  Had to run out and get some of that blackcurrant liqueur to do it, of course.  Love it, luckily since we now have that liqueur.  Then the Chief's Gazpacho sounded so good, I copied  the directions for when we have more of those ingredients on hand.  Also mentioned were the Oeufs Mimosa, which are stuffed eggs with slivers of crispy bacon added.  Oh boy! 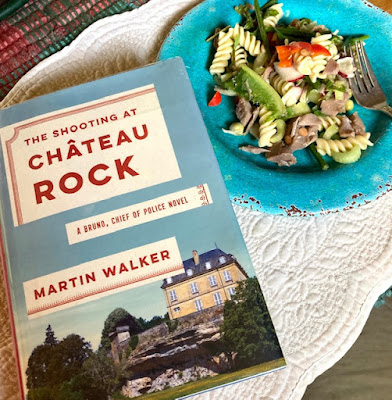 For my post inspiration from the book, I made a batch of duck confit, and then used some last night in this yummy pasta salad..  A  sort of Springtime recipe Bruno would be likely to make.  Bruno, of course, makes duck confit all the time, and with his own ducks.  I considered it a score just getting some organic legs from our Natural Foods store, which meant I didn't even have to break down a whole bird, like the last time I made confit. 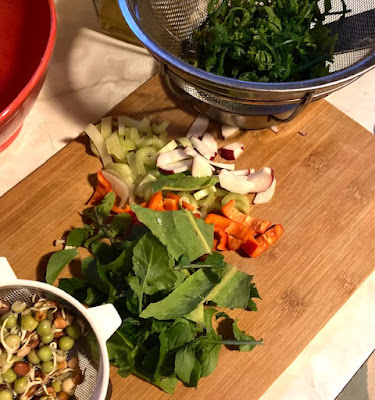 Duck confit has the benefit of keeping under a layer of fat for some time.  It's like a homemade fast food.  One easy use is to quick crisp up the skin side and set atop a dish of sautéed potatoes and vegetables which I did with two of the legs.  Then last night I chunked up the last two and warmed them in a marinade of garlic, shoyu, red wine vinegar, a bit of duck fat and olive oil.  They were then tossed with spiral pasta, fern shoots, arugula and lettuce from the garden, with added sprouts, sweet peppers, radish and celery.  I added a little more wine vinegar to taste, some pepper, and voila! 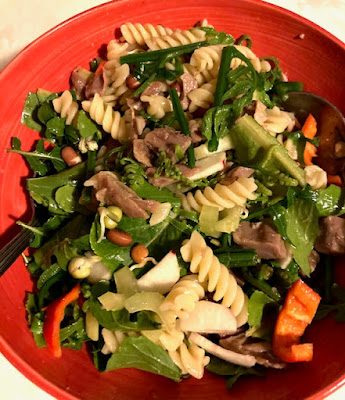 This salad is the bomb!  Delicious and fresh with assorted crunchy, leafy and succulent textures, lots of color and flavor.  I made slightly more than was needed for the two of us, which means I have a lovely lunch today.  Chief of Police Bruno would surely approve. 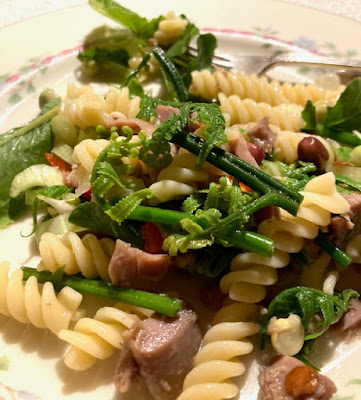 To be linked with Heather's April edition of the  Foodie's Read Challenge, Weekend Cooking, hosted by Marge, the Intrepid Reader and The Sunday Salon, presided over by Deb Nance of Readerbuzz.  I hope you'll stop by, visit everyone, and enjoy all the books and fine cuisine!
Posted by Claudia at 11:46 AM

I don't think I have ever cooked duck. let alone confited it! Your salad looks so delicious, and a sip of one of those cocktails sound delicious too!

I love a series for the reasons you mentioned, familiar characters coming to life and aging, moving along in careers & so on.

So jealous of your garden!

I really enjoyed reading your post- so much interesting information and I'm fascinated that you have chickens..

You have drawn a lot of joy from this book. One of the delights of reading a series is getting to know the characters well and watching them grow over the years. You've added the fun of bringing the food and drinks to life. The spigariello broccoli...the kir...the duck confit...all of these sound quite marvelous.

I enjoy this series that I believe you introduced me to several years ago. You are right there is never a lack of food inspiration. This salad sounds amazing. Thanks for sharing.

I've never cooked or eaten duck. I live in a town that has free range chickens running around wherever they want. I see/hear them mostly in the mornings but also in the afternoon and evenings..

I haven't read Martin Walker's Bruno, Chief of Police, series, but it sounds like I should. I seem to be more on a fantasy kick right now, but I do love a good mystery. It sounds like you've gotten inspiration from the book in other ways too! The food looks delicious. I hope you have a great week!

I did enjoy The Patriarch when we read it for CTB. Might have to pick this one up.