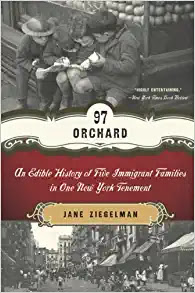 We have been reading, or in my case browsing and sampling, 97 Orchard, by Jane Ziegelman our current, soon to be past, Cook the Books Club selection.  Jumping here and there in the book.  No excuse other than I found it hard to focus, with such a wealth of  factoids and history to absorb.  The book is sub-titled An Edible History of Five Immigrant Families in One New York Tenement, and is being hosted this round by Simona of Bricole.
Lots of amazing information, things I never knew about our immigrant forebears, their lives and times.  For an example, were you aware that at one time, circa 1842, about 10,000 pigs were roaming the streets of New York?  Finding what forage they could, garbage, etc. Just imagine....?  Or that folks were raising geese in their basements?  The noise! Not to mention the smell.  But those folks were industrious, inventive and struggling to survive, frequently in the face of cruel discrimination.. This book is about so much more than the food, covering as it does the lives of the immigrants as a whole. An excellent book for history teachers to assign.  Take note teachers!  We have too much revisionist history circulating at present.  Not my usual reading path, but I really enjoyed this look at our ancestors' traditions, lives and the times they lived through.
From the Publishers:
“Social history is, most elementally, food history. Jane Ziegelman had the great idea to zero in on one Lower East Side tenement building, and through it she has crafted a unique and aromatic narrative of New York’s immigrant culture: with bread in the oven, steam rising from pots, and the family gathering round.” — Russell Shorto, author of The Island at the Center of the World.
97 Orchard is a richly detailed investigation of the lives and culinary habits—shopping, cooking, and eating—of five families of various ethnicities living at the turn of the twentieth century in one tenement on the Lower East Side of Manhattan. With 40 recipes included, 97 Orchard is perfect for … anyone interested in the history of how immigrant food became American food; and “foodies” of every stripe." 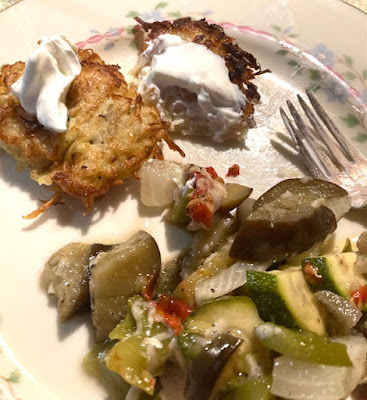 My own ancestors came over from England, through my father, from Germany through my mother and on my husband's side from Ireland, and Germany, a Jewish grandfather escaping in the years prior to the Hitler regime, when the atmosphere was very anti-Semitic.
Bob remembers his mother making latkes, so in honor of that heritage, I am doing a Hawaiian version.  The daikon root a nod to our local Korean immigrants.  The original recipe uses celery root with the potatoes, however having excess of daikon from our garden, I thought it would add a nice touch of tang to the classic latkes. Crisp and flavorful, these are equally good as a first course served with applesauce or sour cream and as a side for roast fowl or fish. Note: I cut the recipe down to 1/3 of what is given here, and it made a perfect amount for the two of us, plus the two latkes I had with an egg this morning.  Lovely!  Though you may be bigger eaters. 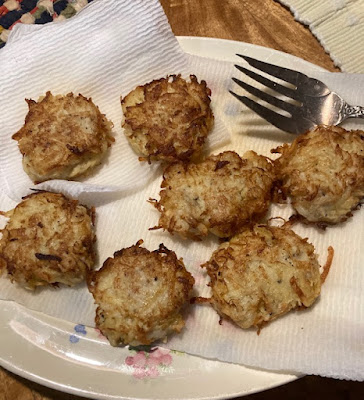 Put racks in upper and lower thirds of oven and preheat oven to 250°F.

Set a wire rack on each of two baking sheets.

Using the wide holes of a box grater, coarsely grate celery or daikon root into a bowl (see Cook’s Note).

Peel potatoes and coarsely grate into a large bowl. Add lemon juice and toss. Coarsely grate onions into same bowl. Transfer to a kitchen towel (not terry cloth), gather up corners to form a sack, and twist tightly to wring out as much liquid as possible. Return potatoes and onions to cleaned bowl and stir in celery root, flour, eggs, salt, pepper and celery seed until well combined.

Heat 1⁄3-inch oil in a 12-inch nonstick skillet over moderately high heat until hot but not smoking. Fill a 1⁄4-cup measure with latke mixture (not tightly packed), carefully spoon it into skillet, and flatten to 3 inches in diameter with a slotted spatula. Form 3 more latkes and fry until undersides are deep golden, 1½ to 3 minutes. Turn over using two spatulas and fry until deep golden on second side, 1½ to 3 minutes more. (If latkes brown too quickly, lower heat to moderate.) Transfer to paper towels to drain briefly, then arrange (in one layer) on rack on one baking sheet and keep warm in oven. Make more latkes in same manner, using second baking sheet for last batches. 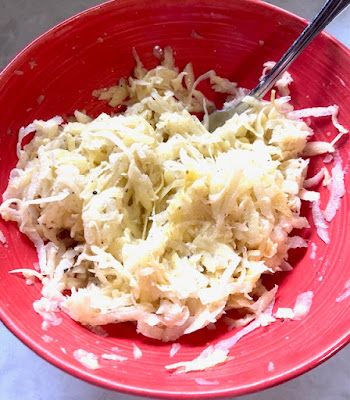 Cook’s notes: The celery or daikon root, potatoes, and onions can be shredded in a food processor with the shredding disk. In that case, use 5 eggs instead of 4, because the machine will grate them more coarsely and the mixture will require more binding.  They can be fried up to 1 hour ahead.

Serves 8 (makes about 32 latkes) As you can see, after cutting the recipe down, I had 7 latkes.

These little treats were delicious, crispy  on the outside and chewy soft on the insides, with a yummy, savory flavor.  Just hints of the radishy daikon.   I served them with a dollop of sour cream and as my side to a dish of Ratatouille, which they complemented perfectly. 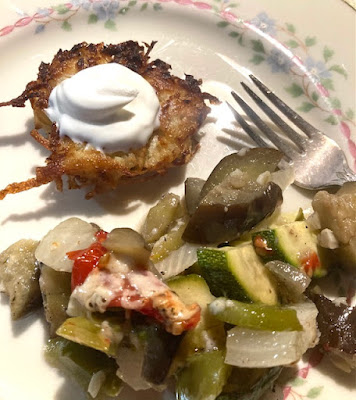 I'll be submitting this post as my contribution to our current Cook the Books Club selection (watch for the Roundup, coming soon), to Heather who hosts Foodies Read Challenge, and at Weekend Cooking, hosted by The Intrepid Reader, Marge. I certainly hope you'll visit those links for some good books and food ideas.
Posted by Claudia at 11:11 AM

What an inventive idea to use the daikon you had on hand. I love the connections you made to your own ancestors.

I have been meaning to join in on Cook the Books for quite some time. I did join for one month and that was it. I have just looked at the future selections and at least 3 of them sound appealing so I am going to make a more concerted effort to join in!

This sounds so inviting to try a new recipe.
I loved your commentary on your families history and using what you had available in your garden.

Claudia, those look so good! I’d forgotten about CtB club & when I saw Debra’s review of 97 Orchard I wish I’d joined in. I’m going to read that book anyway even though the window has closed for submission. It sounds fascinating.

Latkes are such a good choice. Based on some reviews last week, I just started reading 97 Orchid Street. Looking forward to getting into it.

these look so good and good for you thanks for sharing come see what we shared at http://shopannies.blogspot.com

This sounds like a book I would enjoy, thanks for the review!

Ooooh I love the sound of these. I definitely need to give them a try. We love latkes of all kinds. I should check out the upcoming cook the books.

Loved that you used what you had on hand and added the daikon root. Very apropos for this months read.

The book was indeed filled with unexpected facts, like that about raising geese. Indeed, those people were incredibly industrious. Great choice of recipe, Claudia, and great variation by using daikon (a root I've recently come to appreciate a lot). Thank you so much for your contribution to this edition of Cook the Books :)