Persimmons for Desert and Transient Desires 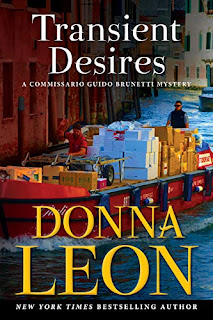 Don't you hate it when you've just read the last of a wonderfully written series.  Donna Leon's Transient Desires is such a one.  Now I've got to wait for her next novel, along with all the other fans.

A depressing subject perhaps, yet written with compassion and objectivity, as Commissario Brunetti seeks to find the truth and see that justice is served. Why so many of us love mysteries.  We have that same hope. The aging policeman is going through a period of melancholy, brought on in part by the overwhelming number of tourists and huge ships wrecking havoc in his precious city, frustrated with many of his retired friends who are only interested in their grandchildren.  Then there is always the corruption in high places. But, he has the consolation of a wise and loving wife, challenging children and supportive colleagues, all set in the beauty that is Venice..

"In the landmark thirtieth installment of the bestselling series the New Yorker has called “an unusually potent cocktail of atmosphere and event,” Guido Brunetti is forced to confront an unimaginable crime.

In his many years as a commissario, Guido Brunetti has seen all manner of crime and known intuitively how to navigate the various pathways in his native city, Venice, to discover the person responsible. Now, in Transient Desires, the thirtieth novel in Donna Leon’s masterful series, he faces a heinous crime committed outside his jurisdiction. He is drawn in innocently enough: two young American women have been badly injured in a boating accident, joy riding in the Laguna with two young Italians. However, Brunetti’s curiosity is aroused by the behavior of the young men, who abandoned the victims after taking them to the hospital. If the injuries were the result of an accident, why did they want to avoid association with it?"

As Brunetti and his colleague, Claudia Griffoni, investigate the incident, they discover that one of the young men works for a man rumored to be involved in more sinister nighttime activities in the Laguna. To get to the bottom of what proves to be a gut-wrenching case, Brunetti needs to enlist the help of both the Carabinieri and the Guardia di Costiera. Determining how much trust he and Griffoni can put in these unfamiliar colleagues adds to the difficulty of solving a peculiarly horrible crime whose perpetrators are technologically brilliant and ruthlessly organized.

Donna Leon’s Transient Desires is as powerful as any novel she has written, testing Brunetti to his limits and forcing him to listen very carefully for the truth." 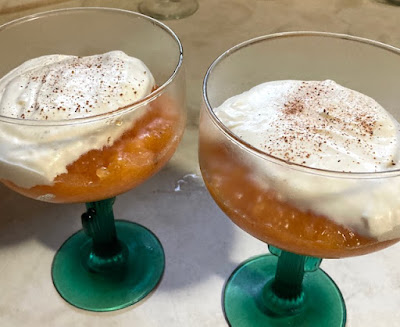 At one point in the novel, Brunetti and the children are delighted and cheered by Paola's delicious yet simple dessert of puréed persimmons with cream.  That was an inspiration, as well as a revelation.  I am ashamed to admit, never having even tasted persimmons.  I asked Bob, and he hadn't either.  Luckily, our market had them, which I was told was a sign of Fall arriving.  Here in Hawaii!  What a  fortuitous coincidence!  Then waiting for the fruit to become ripe enough.  Martha Stewart said you can freeze the firm Fuyu persimmon "for eight hours (or up to a month), which softens and preserves them."  I liked the idea of pushing up the time frame.  Which is what I did.  Didn't peel as easily as I thought it should.  But, all in a day's work, for a lovely dessert! 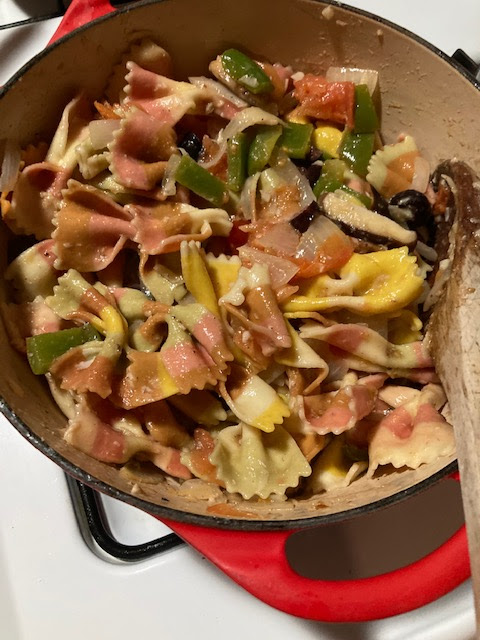 My dinner selection, Pasta Puttenesca, was loosely based on a part of the plot.  You'll just have to read the book, which shouldn't be a chore :)  Tip, the bad guys are involved in human trafficking, not to put too fine a point on it.  The lovely Multicolor Farfalline was the pasta of choice, because that's what this lady had on hand, along with assorted vegetables and some Parmesan. 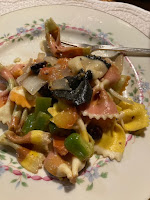 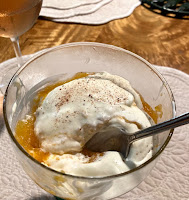 Do you like the way I wrote about the dessert first here?  Altogether a truly delicious meal. I'll be linking this post with Weekend Cooking, hosted by Marge, the Intrepid Reader, and with Heather at the October Foodies Read Challenge.

30 books in the series...it must be good for you to have read them all. Dessert first...life is short.

My thought exactly Wendy. Bob says his mom would often have dessert first.

Oh no, looks like I have to add another series to my list. LOL. Both dishes look great! One of my grandmothers cooked with persimmons, so I've tasted them. I'm not sure why I've never tried cooking with them.

Nothing like a good series that you really get swept away with. Your review has me interested. As for persimmons- well I've tasted one once and wasn't impressed but my husband is a big fan and buys them whenever they are in season. Maybe I would like them better cooked!

Clearly Your house is the place to be for dinner!! I love the pasta dish and have never had persimmons in a dessert but I’d love to.

A series with 30 books, that’s for me. I love a series and am thrilled when there are loads out there.