Cooking, Under Advisement, with Fernet Branca 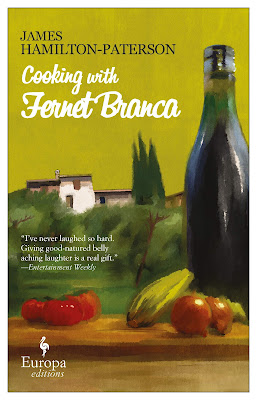 We at Cook the Books are currently reading Cooking With Fernet Branca, hosted by our own Simona of Briciole.  The title, by the way, is not referring to a person, but a little known (where I live anyway) Italian aperitivo. Written strictly tongue in cheek, and pretty silly at times.

"If you have ever wondered what the 'extra' in 'extra virgin olive oil' really means then this is the book for you. Set in Tuscany it features a series of comic misunderstandings between two warring neighbours. They take turns to tell the story and you will soon learn not to trust either of them completely!"  Whichbook

Gerald Samper, an effete English snob, has his own private hilltop in Tuscany where he whiles away his time working as a ghostwriter for celebrities and inventing wholly original culinary concoctions―including ice cream made with garlic and the bitter, herb-based liqueur known as Fernet Branca. But Gerald’s idyll is about to be shattered by the arrival of Marta, on the run from a crime-riddled former Soviet republic, as a series of misunderstandings brings this odd couple into ever closer and more disastrous proximity . . .

And, “A very funny sendup of Italian-cooking-holiday-romance novels” (Publishers Weekly).

Both the neighbors are continually underestimating and making erroneous assumptions about one another, which is a source of some of the humor, in just how far off they both are. I had many actual laugh out loud moments going through this humorous and satirical novel, usually due to the unexpected, totally deadpan delivery.

For example: "Maj. Gen Sir Aubrey Lutterworth's 'Elements of Raj Cookery' (1887) would surely be on every insomniac's bedside table were it not so rare. He is full of cunning ways with fruit bats, python etc. and his recipes breathe a manly simplicity. 'With a sharp dhauji remove the paws of a medium-sized panda. Discard the animal. Soak the claws overnight in a crock of fresh tikkhu juice. In the monsoon months it will be found expedient to mount a guard since the smell of tikkhu fermenting is irresistible to both upland tiger and bamboo wolf." P. 155 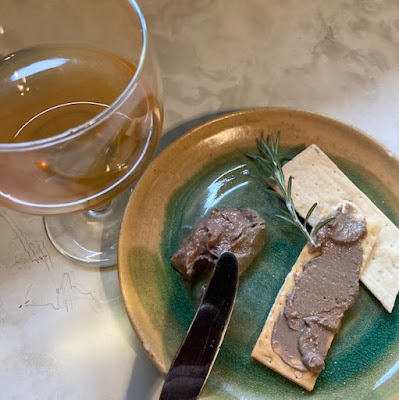 Or, his remarks preceding a recipe for "Alien Pie": "Might I just mention in passing that lard also forms the basis of a stupendously successful weight-loss diet I pioneered for a women's magazine, now sadly defunct?  It was called the LFM diet after its three ingredients: lard, Fernet and multivitamins.  Half a bottle of Fernet Branca a day, plus a single multivitamin pill and all the lard you can eat.  Just that! And the weight, ladies, rolls off....But do be sensible and remember, as when starting any new diet, not to consult a member of the medical profession.  For obvious reasons doctors are dead against your becoming healthy." P. 166
I forget now where I saw a reference (in this book?) to Fernet Branca and chicken livers, but pursuing that thread, found a  recipe from The Washington Post for one. That sent me on a search for Chicken Liver Paté, which seemed more doable and could easily incorporate said Branca in place of other spirits.
This is what I came up with, thanks to Jacques Pépin.  Since I had over a lb. of chicken livers I doubled the recipe. 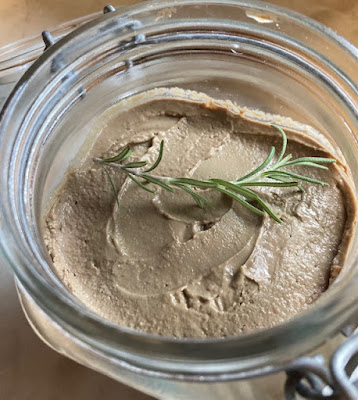 Trim off and discard the sinew, visible fat and any traces of green from the chicken livers, separating them into lobes. Use paper towels to pat the chicken livers dry, then season them lightly with salt and pepper.

In a medium saucepan, combine the chicken livers, onion, garlic, bay leaf, thyme and 1/2 teaspoon of salt. Add the water and bring to a simmer. Cover, reduce the heat to low and cook, stirring occasionally, until the livers are barely pink inside, about 3 minutes. Remove from the heat and let stand, covered, for 5 minutes. 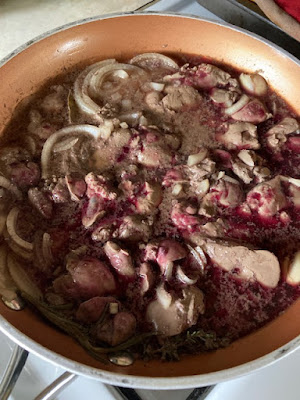 Discard the bay leaf and rosemary sprig if used. Using a slotted spoon, transfer the livers, onion and garlic to a food processor; process until coarsely pureed. With the machine on, add the butter, 2 tablespoons at a time, until incorporated. Add the Cognac, or Fernet Branca, season with salt and pepper and process until completely smooth. Scrape the pâté into large ramekins. Press a piece of plastic wrap directly onto the surface of the pâté and refrigerate until firm. Serve chilled.

The pâté can be covered with a thin layer of melted butter, then wrapped in plastic and refrigerated for up to 1 week or frozen for up to 2 months.  It firmed up nicely.  I'm saving the bulk of it for a party next month, but had a few delicious samples, of course.  Bob doesn't like liver in any form.  Hey, more for the rest of us! 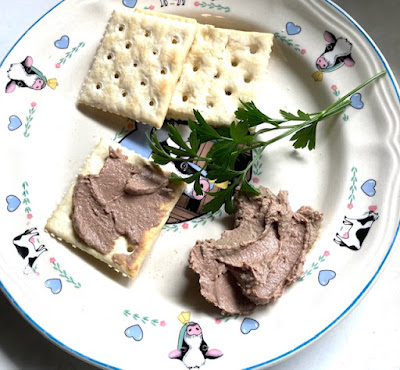 There we have my contribution to the festivities.  Aside from Cook the Books Club Roundup, I'll link this up with Weekend Cooking, hosted by the inimitable Marge, Intrepid Reader and Baker, and with Heather, host of the Foodies Read Challenge.
Posted by Claudia at 1:21 PM

I thought I knew every diet out there- but I have to say that the lard diet is totally new to me and one I will never try. My mother used to make chopped chicken livers and my dad loved it. It was a big job I remember.

I don't think anyone would try that diet Judee! Funny in context.

I'm readung this book now and it's very funny. Just Eeeew on that lard!! The neighbor is a hoot. Not sure what I will be making yet but I do like the looks of your pate.

The pate looks so smooth! Sadly I cannot get liver past my lips...

We love a bit of pate on occasion!

I haven't started reading this yet. Better get onto that!

I was happy I found a little airplane size bottle at Total Wines. I still have a little left so this pate may make an appearance over the holidays.

Wendy, unfortunately no airline size bottles were available, no Total Wines here, so I didn't want to risk it with an expensive bottle I'd probably not even like:)

You did cook with Fernet Branca! Maybe if I had been more inspired by the book. It was not a favorite. :(

Glad the book made you laugh, Claudia. Great choice of recipe. I am sure it disappeared quickly at the party. Thank you for your contribution to this edition of Cook the Books :)

I’m sure that “diet” was just another of the Author’s little jokes!

A lot of people turn up their nose at pate, especially chicken, but I really like it so enjoyed your take on this -- the Fernet I can do without but the pate concept rings my bell