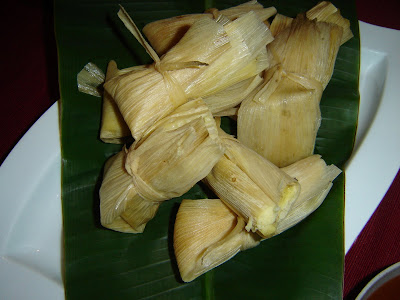 I have long harbored a secret desire to make authentic tamales.  Not exactly sure what has stopped me before now, but given an assignment, I was more than happy to rise to the occasion.  Maranda of Jolts & Jollies was our January 2012 Daring Cooks hostess with the mostess!  Maranda challenged us to make traditional Mexican Tamales as our first challenge of the year! 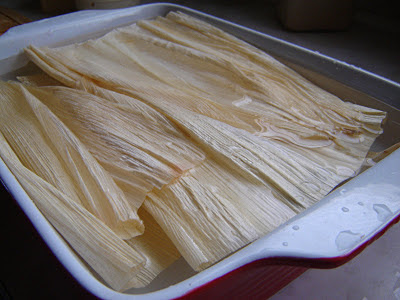 The initial thing is to soak your corn husks covered with water, 3 hours or overnight.  Luckily our Natural Foods Market carries them, so no problems there.  Lard however was another issue.  I'm not into buying pork or pig by-products that come from inhumane animal factories.  Since no decent lard (almost sounds like an oxymoron doesn't it?) was locally available, I decided to use duck plus bacon fat, both of which were on hand, and thinking that a bit of duck flavor wouldn't hurt.  Actually, the only thing I wasn't that totally happy with.  It goes into the tamale dough along with some broth or water and masa harina (or corn flour - which is what I had, and they turned out super). 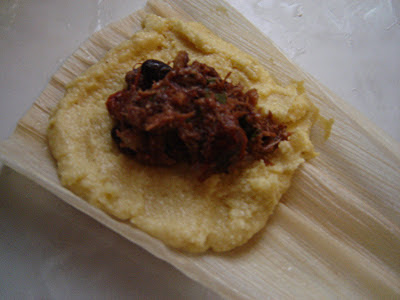 You pat a few tablespoons of that dough into a rectangle on a moistened corn husk, then add a bit of filling, roll and tie, now repeat.  Then you steam all your completed tamales an hour or so.  That's it.  The directions we were given went into way more detail, with pictures along the path, making it very easy to understand.  Check the link above for the whole shebang. 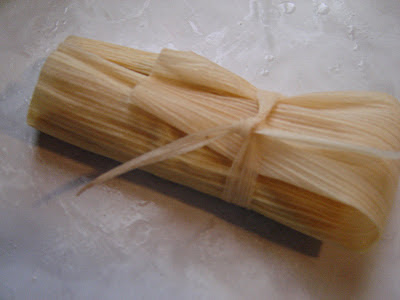 I'll just give the tamale filling recipe I came up with here, as it differs from what examples we were given.  For carnitas (or pulled pork) I like to buy about a 3 lb. pork loin or boneless shoulder, cut it into 1 1/2 " cubes, and put into a wide heavy-bottomed pan.  Add water just to cover the meat, salt, 2 tablespoons lime juice, garlic, maybe a bay leaf, then bring to a simmer.  Cover the pan and cook nice and easy for about 1 1/2 hours.  You could also do it in the oven at low heat.  Remove lid and turn up the heat so the liquid will boil away.  When the meat begins to sizzle, turn down the heat and fry gently until golden.  Remove from pot and allow the excess fat to drain off before shredding.  You can serve some up immediately (fabulous for tacos) and freezer bag the rest into dinner size portions.  Great to have on hand. 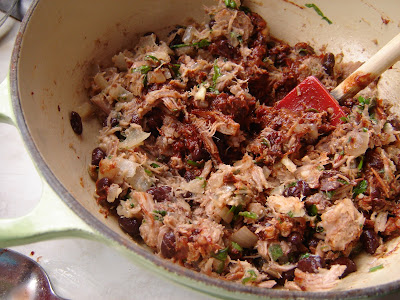 Remove stems and seeds from the peppers.  Rinse and put in a pan with water to cover.  Bring to a boil over medium high heat.  Remove from heat, cover and soak for 30 minutes.

Meanwhile, saute the onion and garlic in the oil until softened and translucent.  Add in the salt and pepper. Drain the peppers, reserving some of the soaking water and place in a blender or food processor.  Add  1/2 the beans, the oregano.and some chili water.  Process until smooth.  Add to the meat and stir in the cilantro.  Now taste test.  See if it needs more salt or pepper.  Now you are ready to stuff those tamales. 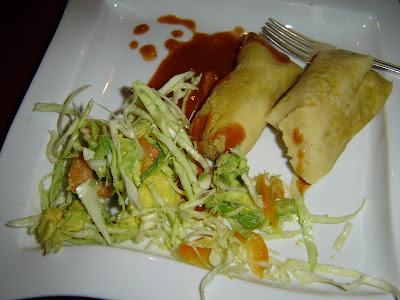 So yummy,  I will definitely be making more tamales in the future.  More and more.  I served them with some enchilada sauce and a slaw of cabbage, orange bell pepper and avocado.  Be sure to to go over to the Daring Cooks link and see what everyone did, as well as get  full detailed tamale directions and other options for filling.

I made the chicken but your pork filling sounds fabulous.

Lyuba @ Will Cook For Smiles said...

Oh, that filling sounds wonderful!! Great job! I hope you visit me at http://www.willcookforsmiles.com/2012/01/daring-kitchen-pork-tamales.html

Crazy, I am planning on making some too! Thanks for the post and the recipe!

There is no better combination in my mind then spicy pork and black beans! Tamales look fantastic! Great job.

Thanks all, what surprised me most about the process was just how easy it was.

Carnitas and black beans are some of my favourite things so I know I'd love these tamales. And duck fat--how decadent! I was lucky to find nice lard at the farmers' market. Your tamales look gorgeous!

I love the consistency of your tamales..they look perfectly cooked
great job on this challenge

Tamales are definitely on my short list of recipes TO MAKE in 2012...I can't imagine why I've put them off for so long! Yours look fabulous.

These do look good - I've never tried tamales but would like to one day. Unfortunately I couldn't take part this month as I couldn't find masa harina over here in the UK. Tamales are not well known here at all.

Monkeyshines in the Kitchen said...

Mmmm! I bet the duck and bacon fat in the masa dough was divine! your carnitas filling looks phenomenal too!

Corina, the whole grain corn flour I used turned out fine. You just have to add salt and baking powder, which the instant masa mixes already have.

I need to try Tamales, always see them in the store,as it is non-veggie, I need to look for veggie option.This one sounds delicious.

Your filling sounds delicious! I should have served mine with enchilada sauce too.